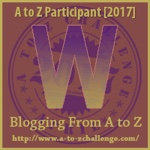 She drove him crazy, constantly changing her mind. At one point, she banished him from court for several months. But Sir Francis Walsingham  was a good and loyal civil servant and without him, Elizabeth I stood a much greater chance of being assassinated or losing her throne.

Let's face it, Elizabeth had plenty of enemies, as did the rest of her family, ever since her grandfather Henry VII grabbed the throne off Richard III. There were all those young men in Henry's reign popping up claiming to be his wife's brothers and therefore the rightful heirs to the throne. There were real relatives of the York family who might be a threat(his son Henry VIII got rid of the last of those).

And then the Tudors started marrying off daughters. And THEY had children with Tudor blood who were, maybe, entitled to inherit, and why bother waiting to inherit, especially when That Woman currently on the throne wasn't even a Catholic? It didn't help, in this respect, that she hadn't married and produced her own heir.

And the biggest of her enemies, apart from her brother-in-law, Phillip of Spain, was Mary, Queen of Scots. Mary was Elizabeth's cousin, through her grandmother, Margaret Tudor(who remarried after her first husband's death and produced another potential heir...), and not only that, but she had married and produced an heir. Who, by the way, did end up becoming King of England, but that was later. Mary hadn't been capable of running her own country, let alone Elizabeth's, which was why she ended up in England, with plots going on all around her. Elizabeth didn't know what to do with her. Well, she did, but she didn't think it was a good idea, for quite some years. And then she hated doing it.

Elizabeth needed her faithful spymaster to find out who was plotting what and deal with it. And boy, was there a lot of plotting going on! Elizabethan England was a golden age of spying. Francis Walsingham was the right man to be running it.

Francis was born in 1532, the son of a lawyer, and became one himself. When Elizabeth's sister Mary came to the throne, he fled the country; it was not a good time to be a staunch Protestant in England. He didn't waste his time overseas, studying local law in Italy.

Returning in 1558 after Elizabeth became Queen, when it was safe, he was elected to Parliament. By 1568, he had started working for her Principal Secretary William Cecil, doing a little spying among French and Italians living in London, gathering information about plots by Spain and France to kick Elizabeth off the throne and replace her with Mary Queen of Scots.

Later, he became Ambassador to France, where he was during the Bartholomew's Day Massacre of Protestants. That happened in 1572, and he had a lot of sorting out to do.

Returning to England the next year, he got a job on the Privy Council. His career as a spymaster took off.

Francis organised a huge intelligence network. He used double agents. In fact, when Mary Queen of Scots was under house arrest in England, he didn't just unearth the plots around her, he had his double agents fool her agents into using communications methods they had supplied! "Here's a nice beer barrel we can use to smuggle messages in..."

He had his own experts who developed and used codes. Through other experts, he had ways of opening sealed documents without the people they were sent to suspecting they had ever been opened. I can't help wondering if he, like Eugene Francois Vidocq, might not have employed criminals... He certainly used them in prisons. He had spies in countries outside England, even in North Africa! And he used statistics, economics, methods of government, to help him in his work. It makes sense. If you hear a country you don't trust is having economic difficulties, for example, it's worth keeping an eye on them.

Thanks to Francis and his work, an invasion of England by Spanish and French troops in favour of Mary was avoided in 1583. He had a spy in the French Embassy, who warned him in time to arrest the head conspirator and seize maps and plans that told their own story. 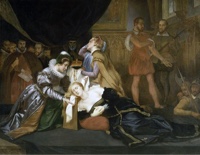 And then there was the (Anthony) Babington plot, only three years later, when Francis's double agents managed finally to get proof that Mary was a part of those plots against her cousin, through those beer barrels, and she was executed. Francis could breathe again.

But his work wasn't done. In 1587 he made sure the Spanish didn't catch on that Francis Drake was about to raid their harbour at Cadiz - and when he knew through his network that the Spanish had their own plans for invading England, he made sure they were fed fake information through the English Ambassador in Paris, whom he was pretty sure was in their pay. (Clifford Stoll would like that!). This reduced the Spanish Armada's chances when they set off to invade England. There were other factors, of course, but even Francis Walsingham couldn't control the weather. He just gave the English a fighting chance.

When he died in 1590, Elizabeth had lost a major asset. I hope she realised it.
My main source for this post was Britannica On Line. Both illustrations are public domain.

Posted by Sue Bursztynski at 6:24 PM

One of my favourite books as a child was Alison Uttley's A Traveller in Time, which featured the Babington family and the Mary plot. Alas, I revisited the book a few years ago and it didn't stand up well - it was terribly slow, and this time I wasn't convinced by the 'romance' of Mary. It gave me the taste for time-slip, though, for which I'll be forever grateful!

And those of us who have enjoyed your own time-slip novels will also be grateful! ;-)

It's always sad when a book you loved turns out not to be as good as you remembered. The idea that Mary was not as romantic as made out to be has been around for a long time. Josephine Tey's Inspector Grant describes her as having the soul of a middle class housewife, which is fine as long as you're only scoring off Mrs Tudor in the next street, but unsuitable for a Queen. He suggests she has been romanticised because everyone sees her through a mist of white veils. That novel was written in about 1950, I think.

Talk about an asset! I wish I had a Walsingham on my side. Sounds like without him, QEI would have been but another small blip in the history books.

--Her Grace, Heidi from Romance Spinners

Hi Sue - great summary write up of that period and 'Walsingham's' reign as spymaster ... our history is not easy! Josephine Tey's 'Daughter of Time' ... is a good book on the period ... and now has had a revival ... when they found Richard III in the car park in Leicester. However not quite the period you're talking about ... this is 100 years later ... but so many ramifications in the 1500 period ... well done - I enjoyed this .. cheers Hilary

I always enjoy reading about Elizabeth I's spy network. Knew some of this, but most was new to me. Great post!

A to Z 2017: Magical and Medicinal Herbs

Elizabeth I is one of my favorites, and I think you can safely say her reign would not have lasted long without Walsingham and his network of spies and methods to keep England a few steps ahead of the continental powers. His spies also enabled Walsingham to save Elizabeth's life from a few assassination attempts as well.

This has been a commendable topic for the A to Z. Your research must have been amazing. Thanks for sharing Sue. W is for Watch the Wordcount as you Build a Better Blog. #AtoZchallenge.

Wow! That was a formidable man!
I'm not familiar witht this part of history, but it does sounds like it was a ... very intersting time ;-)

Heidi, I think we could all use a Walsingham to look after us!

Hilary, Daughter Of Time is one of my favourite bits of comfort reading! It's on my iPad now. And she does have a discussion of how Mary Queen of Scots was not the great heroine people seemed to think at the time the novel was written, so you're not irrelevant here.

Sparta, glad I was able to give you some information you didn't know. :)

Shawna, agreed, but she had the ability to surround herself with loyal people who had the skills she needed, don't you think? If she hadn't had him, someone else would perhaps have filled his place. It would just have been nice if she'd appreciated him more, but then, she wouldn't have been Elizabeth, I suppose!

Shirley, glad you enjoyed it! I enjoy research and this challenge has been a fascinating exercise in it.

Sarah, yes, it was interesting in the Chinese sense of "may you live in interesting times!" ;-) England was surrounded by Catholic countries that wanted to invade and reinstate "the true faith" and replace a competent Queen with one who had made a lot of stupid mistakes. They could only cope by playing them all off against each other. Walsingham was the right man at the right time.
Thank you for tweeting this post for me!