Just Finished Rereading ... The Shirt On His Back by Barbara Hambly

I bought this one in Kindle, as it wasn't available in Apple Books, my preferred ebook reading platform. I read it some time ago on loan from my library, but for some reason can’t find all the books in the Benjamin January series that my library used to have. These days I’m wondering if I’m the only library patron reading them. Maybe they have been weeded?

A pity if they have, because it’s a wonderful series which, unlike many other series, is still good.

This one is the tenth in the series, in which our favourite African American 19th century sleuth, Benjamin January, is asked to go with his white friend, policeman Abishag Shaw, to find out what exactly happened to his brother Johnny, who was murdered in the mountains. Normally he would have said no, as his wife is pregnant and he will be unlikely to return before the baby is born, but the banks have been crashing and he could do with the money. It’s interesting to think that, unlike many other amateur sleuths in crime fiction - January pays his bills mostly through playing the piano and giving music lessons - he is usually paid for his investigations.

Abishag’s other brother, Tom, tells them that the killer was certainly a man called Frank Boden and that he expects Abishag to take vengeance on him, something he can do without punishment, as there are some quirky land situations in that area, which doesn’t actually belong to the US. There is soon to be an annual gathering of trappers at which January and Shaw might find him.

But Shaw isn’t the only one who is after vengeance... 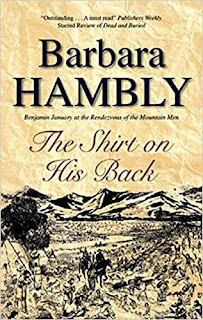 Something I noticed this time that I had forgotten on my first read was all the references to the story of Victor Frankenstein, chasing his creature and giving up everything to follow his quest. It was a nice touch, I thought.

There were some interesting characters, including such historical figures as Kit Carson. There were members of various Native American tribes, all of them with different outlooks on life, and just as likely to be fighting each other as the invaders of their lands, and some whose hatred of whites extended to anyone who wasn’t a Native American. Coal black January is bemused to be called “white man” and even “black white man”!

On the whole, though, he doesn’t have to put up with the racism he experiences in his home town, New Orleans.

Near the end of the novel, we learn that the English king has died and been succeeded by his little niece, some girl called Victoria...

I am so glad I bought this for my reread, and am seriously considering a binge reread of the entire series.

Good Omens on TV - At Last!

Good Omens by Terry Pratchett and Neil Gaiman is a novel I have read and reread, over and over. If you read the introduction to the current edition, you’ll see that I’m not the only one. Some of the copies the authors were given to sign over the years have been battered beyond belief, dropped in the bathtub or even fallen apart completely. Where there was a shiny new copy, it was usually because the owner had lent it out and never got it back.

A few years ago, there was a radio play, which I own, and have mentioned in a previous post. I’ve just discovered that Mark Heap, who played the angel Aziraphale in that, was the villainous Robert Greene in Upstart Crow! It was wonderful, but people were waiting and waiting to see the characters. It has nearly happened in the past, but not actually hit the small screen until May 31 this year. I’m on Twitter, so I was able to follow Neil Gaiman’s tweets about the filming process. Everyone was so excited!

Only problem is that as Amazon had paid a large chunk of the budget - the BBC certainly couldn’t afford to do it the way it needed to be done - you had to be a member of Amazon Prime to watch it right now. It will be several months till the BBC shows it, and some time after that, I suppose, the rest of the world. I resigned myself to having to wait about a year.

I’ve never been a member of a streaming service and assumed you needed to have wifi(I don’t, yet - long story!). But I did some research and no, you don’t need wifi, though it does take up a lot of download. However, I could do it on my iPad and watch it in bed and I now have the Optus app that lets me know how much I’ve used. It was, I decided, worth recharging my download. So I got the Amazon Prime app and subscribed($4 a month, not a lot). And all went smoothly. It won’t be wasted, either - I’ve just started to watch American Gods, another Neil Gaiman story, after a recent reread.

Was it worth the effort? Absolutely! It was perfectly cast, especially the two leads. The dialogue was mainly taken from the book, though there was extra from a sequel that was planned and never happened. The demons Hastur and Ligur had extended roles - in the novel they appeared about twice, once to hand over the Antichrist baby and once when they were sent to collect the disobedient demon Crowley. This way, they were truly scary instead of comical. There was at least one scene I hadn’t expected to be used, the call centre one where Hastur appears from out of Crowley’s answering machine line and devours a whole room of telemarketers, ending with “I needed that!” It was used, though in the novel the telemarketers are restored on the day after Armageddon, having lost a day. Oh, and you get to see the delivery man who was delivering parcels to the Horsemen of the Apocalypse at home with his wife, though he was younger - and taller - than I imagined him from the book.

The Archangel Gabriel was every smarmy boss you have ever loathed: charming, handsome - and thoroughly nasty.  He wasn’t in the novel either, just mentioned once, but was going to be part of that planned sequel. It was interesting to see that Heaven and Hell were basically part of the same building, a skyscraper, with escalators going up and down. Heaven was a shiny office space, while Hell was something out of the Cold War Soviet Union - in one scene Hastur is held up by having to hold a bucket under a leaky ceiling, and no sign of a tradie! You didn’t see the two sets of headquarters in the novel, but it worked for a visual version.

Mostly, what garnered all the good reviews was the development of the friendship between the angel and the demon, both representing their respective worlds for 6000 years and realising they have more in common with each other than with the places they come from. That, of course, was in the novel, but in a six part series  you can show it.  It got a half an episode, in which you saw the two of them meeting through different periods of history, including one in Shakespeare’s Globe Theatre, where they are among only a handful to be seeing Hamlet. There was a scene in London 1941, in which Crowley rescues Aziraphale from Nazi spies by running into a church, despite the pain in his feet - holy place, you see! In fact, some reviews were saying that the friendship story was so good that the rest was boring. Untrue! It was all great!

Michael Sheen and David Tennant were brilliant in their roles, no question about it. So were the other cast members, especially John Hamm as the dreadful Gabriel, but without these two it just wouldn’t have been the same.

I loved the touches of Douglas Adams and Monty Python in the animations. Of course, you would have had to see those in their time to get it - the film version of Hitchhiker’s Guide To The Galaxy was missing those bits.

There is something special when a book you have loved is made into a film and it is every bit as good as you hoped it would be. It did help that one of the two authors was so deeply involved.

If you haven’t read the novel, I do recommend doing that before you see the series. It’s not that you can’t enjoy the show without it, but there is so much extra in the series that if you do decide to read the book, you may be disappointed that your favourite bits aren’t there. It’s not a long book - read it first! You won’t regret it.