Many years ago, when I was about twelve, I read a novel by Mary Renault, The King Must Die, about the legendary hero Theseus. It was a favourite, which I've read and reread. So, it seems, has Wendy Orr, who has recently had a novel published which was also about ancient Greece and bull-dancing, but not about Theseus. Instead, it's about a young woman called Aissa, who, after a lot of personal trauma, suddenly finds herself in Crete, as part of a team of bull-dancers, facing the dangerous beasts, as much a part of a sacred ritual as acrobatics.

Today, Wendy has kindly agreed to visit The Great Raven to answer some questions about her terrific new book. Thank you, Wendy! 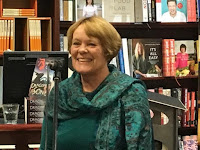 Dragonfly Song was very different from Nim. What made you think of going from present-day adventure to ancient Greece?

When I first started writing, I wrote a novel set in the Minoan period of Thera (Santorini) – it was very nearly published and I’m relieved that it wasn’t, because it really had some major problems. However, interest in that era has continued in the background of my mind, and this story started to take firm shape about five years ago.

We don't know a lot about bull-dancing in Crete, though there are paintings on the walls at Knossos. What kind of research did you have to do to come up with a plausible system for the bull-dancing in your novel? I felt that there were some elements of modern bull-fighting in your descriptions.

I studied images of the wall paintings, sculptures and seal rings, as well as archaeologists’ interpretations. And yes, I also forced myself to watch videos of bull fights, as well as the running of the bulls, and the French bull leaping – which is done on much smaller bulls. But much of the research into bulls’ behaviour is simply that my husband and I farmed for 20 years, mostly on dairy farms, so I’ve had that personal experience of (and healthy respect for) bulls. My husband also grew up on a beef farm, so he had a lot of experience with larger numbers of bulls, and he went through all the bull scenes with me.

There are other novels about this subject, such as Mary Renault's The King Must Die and Poul Anderson's The Dancer From Atlantis(which also had a thirteen year old bull-dancing girl, on the sensible assumption that you'd have to be young and flexible to be able to do that, much like the teen Olympic gymnasts). Did any of these help to inspire you? Or perhaps the modern gymnastics teams?

I don’t know The Dancer from Atlantis, so I shall have to look for that! Thanks. Mary Renault definitely inspired me: I read The King Must Die at 12 or 13 and am sure that was the start of my fascination in the era. But definitely modern gymnasts and young circus performers also influenced my interpretation, particularly when I watched a friend’s son training in a circus school – it was just extraordinary to see what those young kids were accomplishing. I heard one lecturer say that the gymnastic feats of the bull leapers were clearly impossible – I don’t think she could have ever watched the Cirque du Soleil!

Mary Renault's bull-dancers train in teams and each team has its own bull, chosen by the team. In Dragonfly Song, they train, but not really in teams and aren't told which bull they will face until the day before. And the bull is sacrificed at the end of the dance. What made you decide to do it this way?

I didn’t reread The King Must Die until I was polishing this manuscript, which I think was wise. In the end, since there are no written records and a limited number of images of the bull leaping, everyone has to make up their own story. It simply seemed more likely to me that the dancers faced unknown bulls as part of a life and death drama rather than a simple acrobatic display (though on the other hand, personal experience has taught me that a ‘tame’ bull can be even more dangerous than a wild one). There are also images of bull sacrifices in Minoan art, and I find it difficult to imagine that the bull would not have been sacrificed to the gods at the end of the performance. The bull dances were probably a mix of entertainment and religion, and I’m confident that the religion part of it would have demanded sacrifice – and that the appropriate sacrifice would have to be the bull.

What research did you do about Minoan era religion, which plays an important role in this novel?

Again, it’s a difficult subject to research because there is simply no written evidence whatsoever, and a lot of theories. So I simply read all I could about different early religions as well as taking courses on Minoan and Mycenaean history. The huge change from when I started researching this, nearly 30 years ago, by accessing interlibrary loans from the local community library, is of course the internet. Being able to access scholarly papers and PhD theses from sites such as academia.edu, as well as join in academic forums, was an incredible bonus. The sheer quantity of these papers allowed me to take a middle ground and choose the theories that I felt were most likely. However, I really didn’t want the book to be about religion, so I simplified it somewhat. I believe that there were many gods and especially goddesses – probably one for every spring or river and mountain as well as the more major ones, but it seems likely that the primary Minoan deity was an earth or mother goddess, so I focused on that. It also seems that she was at least partially supplanted by the Mycenaean male god – most likely Poseidon at that time, though possibly Zeus. (I chose Poseidon). At the time that Dragonfly Song takes place, the Mycenaeans from mainland Greece were probably in control of Crete, but rather than destroying the Minoan culture, they appear to have absorbed many of its elements.

There is also debate as to whether and how much the Minoans practised human sacrifice. I believe that there’s a bias towards saying that they were sophisticated, peace loving people and therefore that the evidence of human sacrifice and cannibalism is an anomaly. I chose not to explore this in the book, but I did want to suggest that there was a hard edge to the religion, despite the ecstatic dancing!

Tell us a bit about Minoan technology. You do slip in some interesting snippets about the plumbing, for example.

I think everyone is fascinated by the fact that there were flushing toilets and well-functioning sewers three and a half thousand years ago! It was an extremely technologically advanced culture. The architecture is not just grand, it’s sophisticated in the use of folding doors for light and airflow – and possibly for observing sunrise or stars at different times of the year. And the jewellery and figurines, whether of bronze, gold, or precious stone, are exquisite. The carving on the tiny seal stones – similar in size and use to a signet ring – is so intricate that it’s nearly impossible to see with the naked eye. I often wonder if they did in fact have some sort of magnifying lens to carve them. The pottery, whether wheel cast or modelled, is also particularly fine, and wouldn’t look out of place in a gallery or home today.

Your heroine has an issue with speaking because her adoptive mother told her to stay quiet while hiding from the raiders when she was very young. Is this an issue you've come across in real life?

As a paediatric occupational therapist, I once worked with a young boy who was electively mute for a couple of years. I discussed Aissa’s scenario with a paediatric speech pathologist specialising in child and adolescent mental health, as well as with a child psychologist, and they both felt that her mutism was logical in that extreme trauma. Psychological truth in fiction is very important to me, even if some plot points, like singing the snakes, merge into fantasy.

Quite a lot of this novel is in verse. Why is that?

It’s a mystery! I often hear my books in verse before I write them into prose, but this one was quite obstinate about staying in verse. It’s part of the reason that it took me several years to start writing it – I thought the background was too complex for a verse novel. Then I woke up one morning and thought I could write in a combination of verse and prose. I told my editor, expecting her to say that was crazy, but she loved the idea, and so I started. In the first drafts, much more was written in verse, and I then rewrote appropriate sections into prose. The other slightly unusual thing for me was that I had to write all the verse sections by hand, with a Sigur Ros album as soundtrack – normally I write straight onto the computer, and prefer complete silence. I believe that each book dictates its own needs.

Are you working on anything now?

A novel set 200 years earlier than Dragonfly Song, about a family on Thera at the time of the catastrophic eruption, about 1625 BCE. They become refugees in Crete.

If you have any questions, ask them in the comments section and I'll pass them on to Wendy.
This book is published in Australia by Allen and Unwin and is available online, in ebook and at all good bookshops.

Posted by Sue Bursztynski at 9:26 PM