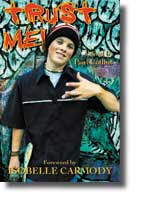 Okay, I can't review this book, because I have a story in it. Still, I can't resist giving it a plug. It started life as an anthology of historical fiction, commissioned by an education publisher. The publisher and Paul Collins, who was editing, disagreed about enough things that he withdrew and decided to publish it himself, through his new company. Oddly, there are only three pieces left under "historical" - mine being one of them - but the theme of this anthology is "genre". That gives a wide variety of choices and there are stories under romance, crime, horror, fantasy, SF, humour, adventure, etc. It's a big, fat book, with about fifty contributors, mostly big-name Australian writers and artists, and as a teacher-librarian I think it will come in handy in classrooms, because you can choose a genre for whatever work you are doing with the kids. I've been reading the stories and enjoying so far.

Isobelle Carmody wrote the introduction, in which she gave my story a whole paragraph - nice!

My story, Countdown to Apollo 11, was one of the historicals. I had a lot of fun researching it; I went to the State Library and browsed through the newspapers of July 1969, to find out what people were concerned about, what things cost, what was on at the movies and the theatre, even what Star Trek episode was on just before the moon landing, because my hero was a Trek fan. The episode was "The Enterprise Incident", by the way. Most of it had to be left out, because I only had about 2000 words, but the story was better for it, and I know all that information, anyway. 1969 was a different world, wasn't it? No Internet, no mobile phones, no personal computers, in Australia TV was still black and white, not even answering machines on phones. I found an article about an anti-Vietnam rally outside the US consulate on July 4th and used one of the individual stories as the background for this one. One of my friends from work told me he remembered that rally and had been there.

So now I know I can do historical fiction if I want. Good to know for the future.

Anyway, conflict of interest or not, I do think this book is worth getting.
Posted by Sue Bursztynski at 6:59 PM No comments: