I’ve just completed a reread of the first four mysteries in this series, which I haven’t read since my teens! The entire series is now available in ebook, which is probably a good thing, since I suspect the print books are now only available on eBay or ABEBooks. Having them under one cover was convenient for me. They are named for days of the week, and after that there are still a few more titles.

David Small is the young rabbi of a Conservative Jewish congregation in Barnard’s Crossing, a small New England town. He is the son and grandson of rabbis and wants to be just like his father and grandfather. He is endearingly scruffy. In every single one of these books, he has a quarrel with the board of directors of his synagogue - different people in each one, as they are appointed yearly, but all of them working hard to make his life difficult. He has firm beliefs and he won’t compromise on them, or do anything he regards as hypocritical. That doesn’t make him popular with them, but interestingly the youngsters like him, not because he plays the guitar or tries to be cool - he doesn’t - but because he doesn’t talk down to them and is always honest with them.

Rabbi Small is the amateur sleuth of this series of cosies. These heroes tend to have a cop buddy; David Small’s cop buddy is the local police chief, Hugh Lanigan. Having a non Jewish friend gives him the excuse to explain the Jewish attitude to various things.

His wife, Miriam, sometimes wishes he would compromise on some things, but loves and  supports him anyway. What she doesn’t do is participate in the solving of the mysteries, except, in one book, supplying some vital information that helps the men solve it.

And that’s the thing: they are nice, gentle stories, and after all these years I still like David Small, who uses the logic he has acquired from years of studying and arguing Jewish laws to solve murders, as well as his own powers of observation. But they are somewhat dated. Written in the 1960s and early 1970s, it shows men ruling the roost and their wives doing the domestic work. The temple board is made up entirely of men and women can’t even vote for it, though they do various ladies’ auxiliary type activities. It is mentioned that at other synagogues that is not the case.

In the fourth book, Monday The Rabbi Took Off, in which David and Miriam go to Israel for three months, Miriam’s efficient aunt Gittel is a social worker, who knows everyone and organises everything, but she is a widow with a grown son. There is no man in her life to look after.  At one point, Gittel tells off a male friend who has let the house get messy while his wife is in hospital, but tidies it herself instead of making him do it.  Miriam takes a (volunteer) job at the hospital and the Smalls’ young son goes to kindergarten, and Miriam still does all the cooking and cleaning while our crime-solving hero spends his days wandering around Jerusalem and stopping for coffee at little cafes. Just as well there is a murder for him to solve!

I suppose you can always think of them as historical fiction.

They are worth reading for the small town, small community politics, and while the mysteries are usually solved very late in the book, the rabbi’s logic does make sense.

If you like cosies and don’t mind when they were written, this series is worth a read.

Is there a book or series you have reread after many years? How did you feel about it?
Posted by Sue Bursztynski at 5:44 AM 8 comments: 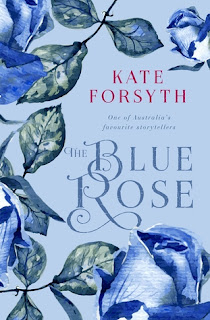 Viviane de Faitaud has grown up alone at the Chateau de Belisama-sur-le-Lac in Brittany, for her father, the Marquis de Ravoisier, lives at the court of Louis XVI in Versailles. After a hailstorm destroys the chateau's orchards, gardens and fields an ambitious young Welshman, David Stronach, accepts the commission to plan the chateau's new gardens in the hope of making his name as a landscape designer...

And, as we might expect, they fall in love, but her father has other ideas... I’ve copied some of the cover blurb here, but it is heavy on spoilers, never a good idea. However, this is about my only issue with the book.

Th novel features not only the French Revolution but a voyage to China, in which David, looking for samples for the Kew Botanical Garden on behalf of Sir Joseph Banks, also searches for a very special red rose to take back for Viviane’s gardens.

Back in France, Viviane, in Paris, has to fight to survive the Reign of Terror, abandoned by her truly dreadful father.

I hadn’t known about the British voyage to China at this time - or that David Stronach was a real person who went on that voyage on behalf of Joseph Banks, although I can only assume we don’t know much about him, making it possible for the author to connect him romantically with the fictional Viviane.

Kate Forsyth has shown she can do a fine job of both historical fantasy and straight historical fiction. I’d consider this as the latter - it doesn’t even have the fairytale theme of her previous novel The Beast’s Garden, although there are two very small fantastical elements, one near the beginning, one near the end. And Viviane insists firmly that she is descended from the Lady of the Lake. Brittany is certainly the scene of many Arthurian tales.

A very readable novel, well worth checking out, even if you prefer fantasy to historical fiction.