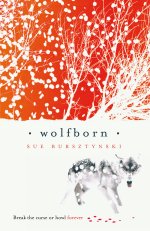 Here's a sample chapter from my novel Wolfborn. I meant to put it up some time ago, but haven't had the chance, although I've emailed out some PDF versions on request. Thanks to Random House for allowing me to put it up on my blog as a promotion. Please note, this was a simple copy and paste from a PDF file which can't be reproduced properly on a regular blog site like this one, so I've just removed all the page numbers and copyright statements except the final one. If you want something that looks more like  the book version, let me know and I'll email it to you. Meanwhile - enjoy, and if you want to read more, go out and buy one in the shops or order the ebook version on-line. If you're outside Australia and want hard copy, you can order it from Fishpond. The postage isn't cheap for one, but if you order, say, three Aussie books, the postage works out a lot cheaper. And if you're in the US you can now buy it in the shops.

If you prefer this chapter in a snazzy ePub book, here's a link to follow to Dropbox, where it's parked:

Let me know if you have trouble opening it, email me at sbursztynski@gmail.com - if I don't know there's a problem I can't fix it! And I can always send you the PDF version.

They executed a werewolf in one of my father’s
inland villages the week I left. There was no question about his guilt; he’d been
taken, in wolf shape, among the flocks, and put in a cage till morning, together with the clothes he’d left hidden in a hollow tree. Nobody saw him change back, but he was found fully clothed in the cage next day, wild-eyed, howling in agony and shaking the bars.
I suppose he could have stayed in his wolf shape, but the villagers knew who he was. It was important to be sure before they did anything; they knew my father would insist on proof, and his dead body alone would not give that proof. Witnesses were needed as well.
It wasn’t illegal to be a werewolf in our region, though it was not much liked, but this one had been destroying the flocks the villagers lived on, and a little girl had been found with her throat torn out. As lord, Father was forced to condemn Pierre – a boy not much older than myself – but he didn’t like it. Neither of us could look into those haunted eyes.
‘I feel sorry for the wretch, Etienne,’ he told me as we rode away, leaving some soldiers to do the dirty work of the execution and the village priest to bless it. ‘He can’t help himself; he was born that way.’
‘Father?’ I asked hesitantly. ‘I heard there’s a race of shape-changers.’
My father gave a sharp bark of laughter. ‘Yes, I’ve heard that too. Perhaps, but I think it’s legend. There are tales of robber barons who signed pacts with the Dark One centuries ago, to make them invincible in their conquests, and their descendants would have the curse; perhaps that’s the origin of that tale. In this case, I suppose someone made a pact far more recently, probably Pierre’s father. He was a wander- ing mercenary who came and went. Many of them are werewolves; it’s useful in their profession. The lords who hire them value their strength and fero- city and they make excellent spies and scouts. They are paid almost double the fee of a normal soldier. Unfortunately, their offspring are often born with the hairy curse – and, as it doesn’t show up till they reach manhood or womanhood, it takes a while for them to be caught. If Pierre’s father had taken him along, he might be learning the soldier’s trade now and be honoured for his abilities. Instead . . .’ He sighed and shrugged. ‘It’s a harsh world, Etienne.’
I was to remember the incident later.

• chapter one •
I hadn’t wanted to go to Lucanne for my training. I didn’t see the point. I had already learned plenty from my father and it was his holding where I would be lord one day. I knew in my heart that I wasn’t going to be a famous warrior. Other things were more important to me.
‘It’s not about being a famous warrior,’ my father had said firmly. ‘It’s about doing your duty as lord to your people. You’re my only son. The kingdom has only you to do what must be done here. I hold these lands of Lord Geraint, and he is the best man to finish your education. And once a year, when you’re Lord of Jervaux, you’ll have to do your duty to the King. These are not the peaceful times when the Rom folk protected us. You’re military caste, lad. Live with it.’

And I was living with it. But I was living with something else, too. Something I hadn’t discussed with my father, something I feared would come out while I was far from my family’s protection. Even if it didn’t, and I returned to marry some neighbour’s daughter, what if it happened afterwards? Happened to my children, if not me?
When I was eight, I got into a fight with the stew- ard’s son and bit him. After we’d both been punished, my mother took me aside.
‘Etienne, you mustn’t ever do that again. The time might come when someone will remember and hold it against you.’
‘Gilbert will hold it against me,’ I’d said, rather proudly to be honest.
‘Yes, he will, but that’s not why.’ She had sent her women to work in the stillroom, and we were alone. Now she picked up her shuttle and continued with her weaving. ‘Listen, Etienne, I come from Lafranc. Your father and I were betrothed at an early age, as our families wished. But there were . . . things . . . my parents never told his parents about our ancestors. It might have led to a cancellation of the marriage contract. And you must never tell your father. He’ll worry and it’s likely that it will never matter. My great-grandfather’s brother was . . . hairy. Very hairy. He disappeared regularly and then . . . he never returned. I think I know why, though I can’t be sure. It happens in the best of families. But in Lafranc, what he was might have led to his death, even if he never did anything wrong. If it happens to you . . . well, we mustn’t give anyone any excuses, do you understand?’
I didn’t understand at the time, though I promised her what she wanted. Later, I heard from my tutor about the race of shape-changers.
Then I panicked.
•
Armand, the head page at Lucanne, took me tothe kitchen and introduced me to the staff. I would be getting to know them well enough in my duties. An older woman named Lise ran the kitchens effi- ciently, as she had to in a place with so many mouths to feed.
We ate leftover cold meat with bread and sipped cups of ale in a corner of the room, talking while work continued around us.
Armand told me about his home.
‘We only have one manor, near the mountains south of here,’ he said. ‘My sisters won’t have much in the way of dowries. Maybe when I earn my spurs and go home I can persuade my father to let me travel to Lafranc for some bigger mares and a stallion. All we have at home are ponies and you can’t ride those in armour. Well, I can’t!’ He gestured at himself and I nodded. Armand was a tall boy. ‘In Lafranc they have the descendants of Rom cavalry horses. Maybe if my family can breed some, we can earn the money for my sisters’ dowries and I can pay for some real armour . . . What about you?’
‘I’m from the coast,’ I said. ‘Our castle is one of a line protecting the country from invaders, but I don’t remember anything except Ibernian pirates; they turn up every summer and we throw them back. Still, you never know. My parents remember when we had real invaders, Saesneg like the ones who invaded the Djarnish Isles centuries ago. Jervaux is a fishing town. I’m here to finish my education, not start it . . . I suppose my sisters will have dowries enough from our other manors. We have four, one of them not far from here, which my father holds of Lord Geraint. I haven’t seen it in years, though.’
‘And what do you want to do when your education is over?’
‘I don’t know,’ I admitted. ‘It doesn’t matter what I want. I’ll return and protect the fishermen and do my military duties when called upon and marry – probably a girl from one of the near estates, but I don’t know who she will be yet. Perhaps I’ll write down some of the legends of the Jervaux coast.’
He stared. ‘You can write? And you aren’t going to be a priest?’
I laughed. ‘Everyone in my family writes and reads, my mother insisted on it. She even taught my father how. A priest? No, thank you! Anyway, it isn’t an option. I’m an only son. We’re in Notzrian territory and their priests don’t marry.’
I wondered if I could ask him about this place without it sounding like gossip. I was going to be here for the next few years; I wanted to know. Gilles, the Lucanne steward who had brought me here from home, had spoken nonstop, but hadn’t said much I was interested in hearing.
‘Tell me about this place,’ I asked, ‘please? We met Lord Geraint on the road here. He was on his way to fight and Gilles went after him as soon as he had left me here.’
Lord Geraint was quite old, I had noticed – at least thirty – but powerfully muscled under his old- fashioned armour, and he wore his long black hair braided for convenience. He was also incredibly hairy. I had noticed that first.

Copyright © Sue Bursztynski, 2010. All rights reserved. No part of this publication may be reproduced, stored in a retrieval system, transmitted in any form or by any means, electronic, mechanical, photocopying, recording or otherwise, without the prior written permission of the publisher.

Did you enjoy this sample chapter?

Here are some places where you can buy it:

It's also available on iBooks or, in print format, at Fishpond, here: