I bought this at the launch, back in September, and had only read a small amount of it, due to various distractions. It's not the sort of book you can read without focussing. But my mother read fifteen pages and said she wanted to read it and reminded me last week, so I decided it was time to finish it once and for all. I will be taking it to her place when I visit later today. It was amazing how quickly I got through it on one rainy afternoon and curled up in bed this morning and now I must get back to my ASIM slush reading. There are six stories to read this week including one 10,000 word piece.
So, what's the novel about? Two sisters, Judith and Belinda, come from a background similar to the author's own Anglo-Jewish Australian one, with a family who arrived here in the Victorian era. Mum is gone, Dad is still in Melbourne and the daughters have moved, respectively, to Sydney and Canberra. The years are 2002 and early 2003 - important, because the novel features the Canberra bushfires.
Belinda is a teacher who loves her garden and cooking and hasn't a man in her life. Judith has an amicable divorce and an ex-partner whom she fled due to domestic violence, and two children she adores.
And then a parcel arrives from Dad, with the belongings of their great grandmother Ada, who practised magic - Jewish magic, which requires responsibility and is not to be used to hurt people. The sisters research to find out more about their ancestress, who had had a falling-out with her daughter, their grandmother, a woman who had become a doctor, so a scientist. And this magic is very much a mother-to-daughter variety. Judith has a daughter and a curiosity to experiment...
Then there's Rhonda, a cousin on the non-Jewish side of the family, descended from the sister who married out. Rhonda is an historian and an oracle who has been hiding on-line under a lot of different identities, because she can't stop herself predicting in public, doesn't even know what she's going to write until it's spilled into a chat room.
It was a fascinating read, which reminded me oddly of Lucy Sussex's wonderful The Scarlet Rider, both written by academic women, both about historical research and magic.
I admit I kept forgetting that the novel was set back in the early 2000s, when there were chat rooms all over the Internet, plenty of Internet cafes and people used floppy disks to carry their files around instead of flash drives and external hard drives. It's strange to think it has only been a bit over a decade since then. And unlike the Sussex book, it won't look dated a few years from now, because it's already effectively historical fiction.
It's also about the casual bigotry we can experience even in this country, even today, though it's set several years ago. The Jewish characters find they have to cope with Antisemitism both from left and right. At one point in the story, Judith is shocked when a long-time(left-wing) friend simply dismisses Molotov cocktails being lobbed at a local Jewish community centre and children being endangered with a "serves them right!"
The magic in the book is gentle and enjoyable, though once, just once, Judith sets an insomnia spell  on her violent ex-partner.
And then there's the unicorn in the garden. Not a Jewish beast as far as I know, but still... At the risk of spoilers, a Shetland unicorn, very like the ones I wrote into my New Wales stories years ago. I still have a figurine made for me by Robert Jan, my partner in New Wales fiction. 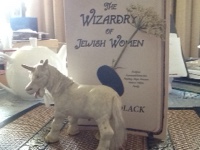 The book is published by Satalyte and is easily available on line. I think it's also available in bookshops here.
Posted by Sue Bursztynski at 6:49 PM