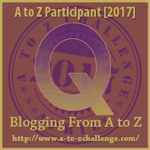 Did you know there actually is a Q? You know, the geek who builds fascinating spy gadgets for secret agents? Well, of course, there has to be someone doing it, but a newspaper article I stumbled across while looking for something starting with Q actually said that the current Q working for the British intelligence agency MI6 is a woman. It didn't mention her name and most of the article was about how women are now doing well in the intelligence services in general - here's the link if you want it - but it tells me that Q stands for Quartermaster. Who would have thought it? Though it does fit in nicely with the Roman frumentarii - wheat collectors - who worked as spies while doing their jobs as quartermasters(see I is for Inte resting Spy Bits And Pieces). They didn't make gadgets, though.

I guess it makes sense, though. You go to a quartermaster in the army to get uniforms and supplies, so why not supplies of gadgets?

What would it take to be one of these people, I wonder? In this day and age, we're a lot more technologically sophisticated than during the Cold War. As someone commented in my gadgets post, it might be a bit difficult to get a lipstick gun through customs these days! And technology has improved since the Cold War. Computer hacking is more common than sneaking around dark offices getting information from filing cabinets. It's safer too, for the agents concerned. So, no need for glow-in-the-dark mini-cameras in rings or whatever.

But still plenty to do. You'd need a real technical genius with imagination. And they exist.

Because I'm a reader and viewer I'm going to divert for a few fictional Q characters.

There is Smithers in Anthony Horowitz's Alex Rider YA fiction. He's a very fat man who is very good with his gadgets. In Stormbreaker, the first novel, he supplies the young spy with such items as a yoyo that is motorised, clips to the belt and has 30 metres of very strong thread for climbing, a jar of zit cream that can be used for picking locks when the cream touches metal and a Game Boy that has four games on it, each of them doing something that is definitely not about game-playing.

Toby Venables has done a series set in mediaeval England, Hunter of Sherwood, with Guy of Gisburne, the villain of the Robin Hood stories, as the unlikely hero. This Gisburne is more or less a cross between James Bond and Indiana Jones, according to the author. He is working for Prince John, who is basically his M, and has his own Q, a Welshman called Llewellyn, who gives him all sorts of useful stuff to take on his adventures.

Terry Pratchett's History Monk Qu creates gadgets for the monks to take when they go out into the world to fix problems in time. He likes things that go bang. In Thief Of Time he is working on a begging bowl that can be turned into a deadly weapon, and you can also eat rice from it.

Now, back to the real world. Check out this interview in Gizmodo, with a real-life Q. Ralph Osterhout says he started life with a love of all things James Bond. He learned to shoot, drive and fight. When he was only twenty-two, he says, he even built a mini-submarine because of one he'd seen in a Bond movie. True? Well, that's what he tells the interviewer. I don't imagine it was one you could do a lot with, but young geeky fannish types can do the most amazing stuff. I know a guy who does high-quality props for the movies; before that, he created a K9 robot dog that was better than the original one in Dr Who (it did three movements - the one on TV was actually three props that did one thing each), just so he could dress as Tom Baker for science fiction conventions. I went to a convention where the guest of honour was Jeremy Bulloch, who played Boba Fett in Star Wars. For fun, he put on a suit of Boba Fett armour made by a fan in the audience and wore it up the aisle as he approached the podium. As he stripped it off, he said that was better than the one he'd worn in the movie! Ralph Osterhout was just another fan who was even better than the ones I've mentioned - though I think those two guys I've mentioned could probably make gadgets for spies if they wanted to. It's a tech thing and a lot of kids I know even now would be able to have a go, at least. Fans go over the top, creating stuff you can use in real life, rather than props that are just good enough to convince viewers in films, so they can use them at SF conventions. Of course, there's CGI now, but they can do that too.

Ralph didn't actually work for the government until he had already been making underwater gadgets that they decided they could use. By that time, he was running a company making high-tech underwater gear. He built night-vision goggles for Desert Storm and two dive vehicles he had built were used in James Bond movies, though those would surely have been just props.

Ralph can't share all the gadgets he has made, but told his interviewer some fascinating stuff. There's one bug that is disguised as bird poop that lands on a window. Mind you, I'd want to wash my window if I saw something disgusting on it, but if you're several floors up and in an office, you leave it till the window washers can get to it and by that time it would have done its job.

I'll let you read the interview - no point in telling you everything he said!

Posted by Sue Bursztynski at 11:29 PM

Fascinating stuff! It's probably quite likely that anyone who does this sort of thing falls into it by accident - they're a genius at inventing and creating devices, probably for their own amusement and then they get headhunted. Interesting background on Q as well - didn't know he/she actually existed!

Hi Sue - great version of Q ... and yes there were certainly lots of gadgets, inventions that helped or hindered peoples around the world ... the things they invented during WW2, and no doubt WW1, probably started out there - as Winston Churchill's time covered both wars ... but Churchill encouraged deceptive inventions ... cheers Hilary

Wow, now that is a little spy knowledge for me. Thanks for sharing

A Peice Of My Life

Thanks, Dee Dee! Glad you enjoyed it.

Nick, I believe that headhunting is how the Q I mentioned got his job. He talks about it in the Gizmodo interview, do click the link and read it! And Q is really a job title, not anyone in particular. Glad you enjoyed!

Oh wow, despite being pretty interested in spies, I'd never heard this information before. I guess maybe I should study it more?

Visiting from the A to Z Challenge. You can see my "Q" post here: https://lydiahowe.com/2017/04/20/q-is-for-questions-atozchallenge-also-time-for-yall-to-ask-questions/

I only stumbled across this while looking for a Q post. And I wrote a book on the subject. Fascinating, isn't it?

Oh, do tell someday. It would be fun to hear about more gadgets made by Q. The bird poop one though wouldn't last long on my window either. Really interesting, Sue!

If you click the link, you can read the entire interview.