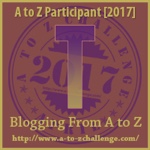 Today's post is brought to you by the letter T, for Harriet Tubman.

An amazingly successful one, actually.

Born into slavery in the 1820s as Araminta Ross, Harriet suffered narcolepsy for the rest of her life after a lead weight thrown at another slave hit her in the face. She had a back full of scars from whippings. She married a free African American called John Tubman, but that didn't make her free, and any children she had would belong to her owners. She escaped in 1849, when she was about to be sold - John disagreed, so she simply left him - and then went back, first for her family, then for others - hundreds of others. She volunteered to work for the Union army as a scout and a spy.

Her spying career began in 1862, with a visit to a Union camp in South Carolina where there were many liberated slaves for her to speak with. It wasn't easy. For one thing, she didn't speak their language - they spoke a sort of mixture of English and African languages. They laughed at her attempts at communication. Then they resented the rations she was getting when they weren't. She won their trust by giving up the rations and making a living selling pies and root beer to the troops, and running a laundry, something male spies probably didn't have to do.  But she had a mission.

Finally, she was ready to go, and she chose around a hundred scouts to get the lay of the land to avoid traps in Confederate territory, doing some scouting herself. She even had a budget for paying for useful information!  As a result, she was able to organise an 1863 raid by boat along the Combahee River, with black troops. They knew about mines laid in the river due to the information she had acquired. This raid, as well as fulfilling its military objectives, liberated seven hundred people, who rushed for the boats with great enthusiasm. A hundred of them later joined the Union army.

As I've mentioned in another post, it wasn't hard for African American slaves to overhear secrets. They were almost invisible. Their owners had no more hesitation about speaking freely in front of them than they did about speaking in front of the sofa or the cows. That made them very useful sources of information for spies such as a disguised Harriet Tubman. For the same reason, Harriet and other African Americans made good spies. They were much less likely to be noticed than white spies. Which didn't mean it wasn't extremely dangerous, especially for Harriet Tubman, who was well known for what she was doing. She would have died horribly if she had been caught.

But she wasn't caught. She survived the war, found a new cause and lived to a ripe old age. It would be nice to say she was appreciated by the government she had helped to win the war, but she wasn't. She had help from admirers, but only a small pension from her husband's war service and a very small one for her service as a nurse, not as a spy - and she had to fight for that. When she died of pneumonia in 1913, she was buried with semi-military honours at Fort Hill Cemetery in Auburn, New York, where she had settled with her family.

There is now an asteroid named for her, and I hear she is going to replace President Andrew Jackson on the twenty dollar bill in 2020. As she might have said, like Hedy Lamarr, "Hmph! About time!"

If you'd like to read and view some more, here are a couple of my sources:

and Biography.com which has a couple of videos as well as an article.

I started this from a chapter in my book Your Cat Could Be A Spy, but it was a very short one and the book was published in 2006, a long time ago, so I thought I'd look again and see if the information had changed since then.

Posted by Sue Bursztynski at 5:33 AM

Hi Sue - fascinating to read about Harriet - she must have been one resourceful woman ... when I found out about the 'underground' railway and I 'm sure there was more than one - it amazed me as I'd never realised it ... then being English I don't know a lot about American history ... we are learning now. Thanks for telling us about Harriet and finally she's getting the recognition she deserved ... cheers Hilary

Yes, she was a tough lady. And it is a pity thT she was unappreciated by the authorities. Fact: the North was really only different from the South in that they didn't have slavery at the time. Earlier in American history, you had to get to Canada to escape! Harriet Tubman was on a train to New York one day after the war she had helped to win. A conductor ordered her into the smoking carriage and broke her arm dragging her there when she refused, while other passengers abused her.

I am not surprised that she was a spy. Glad to hear she's the one chosen for the $20.

Fascinating story. I've read it before in a novel and enjoyed it then too. Thanks for sharing. T is for Tempting Titles as you Build a Better Blog. #AtoZchallenge.

Was the novel called "A Girl Called Moses"? If so, I think I read it in my teens.

Great post and very informative. It's nice that the unappreciated heroic efforts of women are finally being recognized. Find me here. LINK

I read that same book I believe. I know I read a biography of her years ago while I was in high school (I believe), but don't remember the name of it, unless that was it. Harriet has always fascinated me. She was called "Moses" because of the way she would alert slaves she was outside their quarters, come to help them to freedom...she would sing "Go Down, Moses" just loud enough for them to hear, but not loud enough to attract unwanted attention. If they wanted to escape, they met her outside. And of course, also because she was helping to lead her people to freedom, just as Moses did in Egypt. :D

I live in Indiana, and there's a marker in Balbec, not far from where I live, identifying the house behind it (it's at the edge of the road, the house is situated well back but still clearly visible) as being an Underground Railroad station. Interesting side fact, one of my best friends is a descendant of the family who used to own that house. His mother's maiden name is Edmundson, and it was her ancestors who ran that particular station. I can't remember if the Edmundsons or her Blankenbaker ancestors were Quakers, maybe both were, but because of their beliefs they helped any way they could. I used to go past that marker all the time growing up, and while I found it fascinating, never knew who was connected to it until years later when I met my friend.

Susanne, yes, it's more than about time! Christine, this is fascinating stuff! How wonderful to have all that history right near you!

Has anyone read the recent novel The Underground Railroad by Colson Whitehead? It's a delicious piece of fiction with a fantastical element, which is - what if the Underground Railroad really was exactly that - a series of tunnels and trains getting slaves to freedom? So it's an alternative universe, in which the heroine travels on this route and comes up in different states, which have different attitudes to the escaped slaves. I do recommend it.

I admire Harriet Tuberman. It took a lot of backbone to do what she did and cool wit to survive her times. It's sad she wasn't recognized for her bravery before now but that's the way things were but her history will live on forever encouraging others to stand for what they believe in. Good read. Thanks for sharing and for visiting!

~Curious as a Cathy
Art Sketching Through the Alphabet “T” (Treehouse)

Yes, a brave woman indeed! And intelligent too, and a born leader.

Thanks for dropping in too - I did enjoy your treehouse drawing, which took me right back to when my young neighbour Richard built his technological treehouse!

About time indeed! Such an amazing woman. Go figure that she did not get the recognition officially in her life...

What an amazing woman!

About time indeed! Kudos to this brave, determined, and resourceful woman. May she always be honored.

What a remarcable woman! I had heard of her before, but never as a spy.
Thanks so much for sharing her story.

Zalka, no, she didn't get officially recognised, but she did at least have admirers willing to help her. And she isn't the only hero who didn't get what they deserved. There were a few during World War II who saved many lives and were appreciated by those they helped but no one else.

Sue, Deborah, Sarah, yes, a remarkable woman! And she achieved what she wanted, even if she never got the public recognition till after she died - semi-military honours, for heaven's sake!

Fascinating life. I didn't know she was a spy but it does make sense. She was a brave woman. WeekendsInMaine

Karen, yes, it does make sense. Even to do her job on the Underground Railroad she would have needed to get information before taking risks with other people's lives, and what is spying but getting information? So she already knew what she was doing when she arranged information collecting for the Union army.

Wow what a life! That's amazing! I want my life to be as interesting as hers! Such a strong individual!

Wow! A hero who should have been in history books :-)
Thanks for sharing

A Peice Of My Life

DeeDee, she IS in the history books! 😀

Karine, you and I might have found her life rather TOO exciting! ;-)

Quite staggering to read all she achieved. Clearly one very driven, brave and resourceful lady. Long overdue in being recognised and - like you - I love that she's replacing a slave-owing President on the $20 bill.

Bunny and the Bloke

I'll be interested to see which image of her they use.

A very brave woman who suffered much to help others find their freedom. She deserves all the positive credit she's been given.

Thanks for sharing her spy history during the Civil War. I didn't realize that's where it all started. A spy who also makes pies and root beer! What a story. https:// <a href=