An interview with Mark Walden, author of the H.I.V.E series 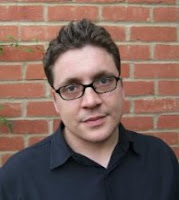 Hi, Mark! Welcome to The Great Raven and thank you for agreeing to do this interview. I’ve read and reviewed all your books, so this is a great treat! The posts reviewing your books are among the most popular on this web site.
1. Tell us about yourself – how did a person with your background in games design come to be writing young adult fiction?

Part of the reason that I started writing was down to the fact that I was becoming extremely frustrated with how uncreative the games industry was becoming.  The teams that develop video games are so massive now that it's rare that one person can have very much creative input or control and so I turned to writing as a way to produce something that I had complete creative control over.  It might make me sound a bit ego-maniacal (which, of course, I am), but there's something really liberating about being able to create something by yourself and also not having to answer to accountants or project managers.  Video games are “big business” these days and I'm afraid that's taken some of the fun out of making them.

My best friend's cat.  No really, I haven't forgotten my medication.  My friend has a big, fluffy white cat that looks just like the cat that sits on Blofeld's lap in the old James Bond movies.  So, I was playing with this cat one day and it got me thinking that those old-school Bond villains always just seemed to appear out of thin air with very little back story and that got me thinking about how they became world- conquering megalomaniacs in the first place.  It was only a short mental walk from there to HIVE.  My best friend's cat is also called Otto, so he helped in more ways than one....

3.     Sometimes, I feel as if I’m playing a computer game in my head when I read your books - do your games-designing skills actually give you ideas for your fiction?

I think that the main characteristic that I wanted Otto and the gang to share was that they were all clever and resourceful.  Otto especially is the sort of person who uses his brain to  get out of trouble rather than his physical strength and that's something that I personally find much more fun to write than the more traditional action hero.  It also means that I can have more fun with the dialogue between the main characters as they've always got a smart-ass answer for everything!

Yes, it's all leading to a point where the main characters, Otto especially, are going to have to ask themselves where life at HIVE is leading them.  A school for villians may be a neat high-concept idea, but when you actually stop and think about it, it will inevitably lead in to some pretty dark places.  Having said that, I don't ever want to produce a completely straight-faced HIVE book, as the tongue should always be in the vague proximity of the cheek where Otto and the gang are concerned.

Yes, but part of the point of the series, right from the start was to make the readers ask themselves what exactly defines a villain.  Without getting too philosophical about it, I don't think that the bad guy ever really sits there and thinks of themselves as the villain. More practically speaking, if the central characters of the books were truly evil it would be very hard to make the reader root for them.  For my money, the mark of a really great villain is that the reader likes them just as much as the hero any way.

I'm a massive techno-geek and I put a lot of effort into basing the technology in the books on bleeding edge research in the real world.  Most of the technology in the books is just over the horizon from a real world point of view and while there are a lot of science fiction elements it is usually based in reality in some way.  I do a lot of research on-line, although I do sometimes have to be careful.  For example, while I was doing some research for Dreadnought I realised afterwards that I'd just Googled the effects of a nuclear detonation, the details of the President's secret service security team and the internal layout of Airforce One.  To be honest, I'm surprised I didn't end up in Guantanamo Bay!

Thanks, Mark, for the fascinating insight into your work!

The following question and answer appeared on the Good Reading Magazine web site. I’m reproducing it with permission, because I'm sure Mark would have given me the same answer and I thought readers might like to know. If you’d like to read the whole Good Reading interview, here’s the link: http://www.goodreadingmagazine.com.au/meettheauthor.cfm

Paramount has acquired the film rights to your ‘H.I.V.E’ series. Do you have any hints as to when the movie will be coming out?
No, not really.  I’m told that quite often the author is the last person to hear anything anyway, unless you're J.K.Rowling,  so I'm not holding my breath.  I do think that movie versions of books can be a double-edged sword though, the idea of a movie of HIVE is certainly exciting, but you can't help but worry how it might turn out.  For every good book adaptation it seems like there are ten bad ones.
Posted by Sue Bursztynski at 2:33 AM

When is book 9 coming put,eh? Mark

Looks like I’m way behind! I didn’t know the series had gone that far. No idea when Book 9 is due, Book 8 came out in 2015. Did it end on a cliffhanger?