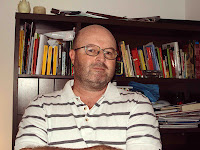 Paul Freeman’s story in Mythic Resonance is told in verse – actually, Chaucer-style verse, though the words are modern. I have a confession to make: I am a Chaucer fan. Every so often, I make my friends or family cringe by declaiming, “Whan that Aprille with his shoures soote/The droghte of Marche hath perced to the roote…”. They usually shut me up before I can get much further.
I’ve checked out Paul’s web site and he really is a Chaucer fan! But Annabel And The Witch adds a touch of Brothers Grimm, but much funnier.

I’m sure Chaucer would grin broadly. But I’ll let Paul tell you all about it.

Annabel and the Witch – a ‘Lost’ Canterbury Tale!

A while ago I became convinced that to make my mark in the world of writing I needed a facet to my work that was unique to me as an author.
This idea is the driving force behind my ‘Lost’ Canterbury Tales, an ongoing project that fuses the stronger areas of my prose and poetry writing. The result is a series of cross-genre short stories, written in iambic pentameters and rhyming couplets (i.e. Chaucerian style). One of these ‘Lost’ Canterbury Tales is Annabel and the Witch, published this year by Specusphere (mine’s the third excerpt):
http://www.specusphere.com/feature-articles/excerpts-from-mythic-resonance.html
The idea of the ‘Lost’ Canterbury Tales project grew from the Chaucer module I wrote for my M.A. in Creative Writing. Whereas Chaucer’s pilgrims told their stories on the way to Canterbury, I gave them stories to tell on their return journey, keeping the medieval theme.
Annabel and the Witch, my eighth ‘Lost’ Tale (originally attributed to Chaucer’s Prioress) tells the story of Annabel, a poverty-stricken girl living in Windermere during the Middle Ages, who gets kidnapped by a witch.
This is my first ‘fairytale’ Canterbury Tale, and is written as closely as I could manage in the style and tradition of the Brothers Grimm. My little yarn is, I hope, less grim (forgive the pun) and more child-friendly than some of the blood-and-guts laden Brothers Grimm fairytales.
Of my remaining ‘Lost’ Canterbury Tales, several have seen the light of day to some degree, though only one other has been published in its entirety.
In 2009, Coscom Entertainment, a Canadian publisher of horror fiction, commissioned me to write the 100-page narrative poem Robin Hood and Friar Tuck: Zombie Killers – A Canterbury Tale by Paul A. Freeman (aka The Monk’s Second Tale):
http://coscomentertainment.com/?p=159
As for my future plans, I’m currently experimenting with different genres in my ‘Lost’ Canterbury Tale project and hope one day to have them published as a collection.
If you want to read more about my varied writing career, click on the link below:
www.paulfreeman.weebly.com

Posted by Sue Bursztynski at 12:39 AM

Paul, that story was so funny that the slush readers cracked up in unison and almost came to blows over who would have the fun of editing it! Stephen Thompson, being the Editor in Chief and the Man with the Money, carted it off. The rest of us were a bit cranky, believe me! However, we got lots more fine tales to edit. One of mine was Holly and Iron, which I think is the next one on Sue's list.

Best of luck with the collection. I'm looking forward to it already!

PS Paul, I can't find you to friend you on Facebook. If you're not there yet, please friend me when you sign up - as you must, one of these days. It's all a big Happening with Bells On over there!