A Saga of a Short Story, by Satima Flavell 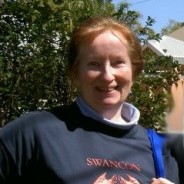 Today’s post brings us near the end. Tomorrow's post is by Alan Baxter, author of “The Everywhere and the Always” and then we will hear from Steohen Thompson, who will tell us about the process of creating an anthology.
Satima Flavell’s story, La Belle Dame, shows the story of the fairy temptress from her viewpoint. I think this is perfectly fair. We never do hear about it from the other side, do we? Circe, for example, might have commented that she didn’t need to do a lot of magic to turn shipwrecked sailors into pigs.
It wasn’t until Satima pointed it out that I saw the resemblance to this tale in the song “Summer Wine”. Drat you, Satima, it has been playing in my head since I read the story!
I am lots of things – editor, reviewer, astrologer, dancer and lover of fantasy, to name a few of my multitudinous hats. My love of fantasy has led me into writing it and for the last few years I’ve been working on a fantasy trilogy. But one thing I’ve never pretended to be is a short story writer.
It seems to me that most writers know where they belong in the scheme of things, and it’s rare to find someone who can write both novels and short stories. (Our own Sue Burstynski is one such rara avis.) I’ve always considered myself as belonging to the novel camp, and have only tried to write short stories three or four times. None was particularly successful, but one of them, ‘La Belle Dame’, kept niggling me to go back to it.
It is, of course, a spin-off from Keats’s poem ‘La Belle Dame Sans Merci’. I rarely read poetry, but one day back in 2004 I spent an afternoon re-reading old favourites. I’ve always loved ‘La Belle Dame sans Merci’, right from the time my year five speech and drama teacher read it aloud – or perhaps I should say performed it, since she moved, gestured and characterised the piece, hardly looking at the book. I was spellbound, and decided to read the poem for myself. And I did, over and over again.
Some years later, I first heard the Nancy Sinatra song, ‘Summer Wine’. It was written by Lee Hazlegrove, who also sang with Sinatra on the recording, if I remember rightly. It’s a much lighter piece than Keats’s poem, but I’m sure Hazlegrove was influenced by the same myth, that of the evil temptress. The piece sent shivers down my spine, and still does, every time I hear it. 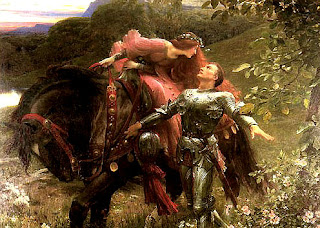 On that day in 2004, after reading the poem for maybe the twentieth time in my life, I was struck by thought that no man ever tells these tales of enchantresses from the woman’s standpoint. The lorelei, the siren, the mermaid, the fairy, the witch – all are depicted as temptresses whose sole aim is to lure men to their doom. But the most evil acts among humankind so often spring from a misdirected search for happiness – and therein may lie one of the tragedies of the human condition. So why not of the inhuman one, too? I sat down and wrote the first draft of ‘La Belle Dame’ in about half an hour. And even at that early stage, ‘Summer Wine’ insisted on influencing the tale as well. Then I set the work aside.
I’d bring the story out and give it an edit now and then. I even sent it out a few times but although it made several shortlists it always came back with a polite rejection when the gongs were handed out. But in 2010 it occurred to me that even if publishers didn’t like it, maybe it might do OK in a competition somewhere. The Katharine Susannah Prichard Writers Centre in Greenmount, Perth, holds an annual speculative fiction contest. Perhaps my baby would hold its own in that show. So I got ‘La Belle Dame’ out again for the umpteenth time and revised it yet again. I had several friends critique it and then I showed it to a published author of my acquaintance. She made one small suggestion about the ending. I didn’t think I could do her notion justice, but when I told another friend, she loved the idea so much I was persuaded to try. To my surprise, the rewrite slotted in very easily, and suddenly, the story worked far better than before!
Off it went to the KSP SF competition, and it was shortlisted! This is a reputable contest, with entries from all over the country, and in 2010 it attracted record numbers – well over a hundred. I felt ‘La Belle Dame’ had earned its keep and could be honourably retired.
But later in 2010, Stephen Thompson, our editor-in-chief at The Specusphere, suggested we should put an anthology together, using stories based on myths and legends. We put out a call for submissions, but they were slow in coming, so I diffidently offered Stephen ‘La Belle Dame’ to boost the numbers. It wasn’t Stephen’s favourite kind of story, but it went out to the slush readers to largely favourable receipt, one of the readers actually declaring that it was her favourite among all the submissions! And so it was that ‘La Belle Dame’ finally found a home inside a real book.
And what a fine little book it is! We at The Specusphere are delighted with Mythic Resonance, and I am delighted that my little story has found a place alongside the work of some of this country’s finest short story writers. Maybe I can write the odd short story, after all!
Satima Flavell (who also writes as Carol Flavell Neist)  is a Perth-based  freelance writer, editor and reviewer. Her first publicaton was a poem in The Manchester Guardian when she was seven, and subsequent scribblings have appeared in The Australian, The West Australian, Dance Australia, Arts West and other journals. She writes reviews and articles for  www.artshub.com.au and is Reviews Editor at www.specusphere.com. Satima was a judge for the 2011 Aurealis Award, while her own fiction writing has met with some modest success in competitions and she is working on a fantasy trilogy. She has a web site here and you can also find her on Facebook and Twitter.
Posted by Sue Bursztynski at 12:52 AM