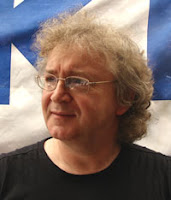 I hope you’ve been enjoying the various guest posts that have been up over the last several days. I know I have! Nearly all the contributors to the anthology responded, and two ladies who write along the same lines. Thanks to everyone who has written on the Great Raven about their fiction; if you’ve enjoyed, why not follow it up by buying the book, if you haven’t already, either paper copy or ebook? I am still hoping for a couple of interviews - stand by - but tonight I am going to round off the celebration of Mythic Resonance with a post that tells you how it all came together and why.  Take it away, Stephen!
The Specusphere was originally set up with the intent of becoming a print magazine. However the economics of it were beyond our capacity. So, we’ve always had it in mind to do some hard copy publishing somewhere along the line.
When we finally decided to do an anthology, we needed to find a theme that all the editors were happy to be involved in. Our interests in the genre are diverse; some of us preferred high fantasy, another tended to romance and another embraced more supernatural elements. How were we to accommodate these tastes?
After a few rounds of email contact, it emerged that we all enjoyed reading myths and legends. Myths, legends, folk tales, urban myths, etc, are the basic building blocks of speculative fiction. It seemed a good idea to follow that path.
However, myths and legends and folk tales are, by their very nature, deeply entwined into popular culture. They exist because they deal with ancient archetypes. To write a new myth is probably an impossible task, because the story needs time to be absorbed into our culture.
We thought along terms of re-writing myths, giving the myth a new, speculative slant. That could work! We went live.
As stories rolled in, it became apparent that there were other problems associated with writing myths, not least being the appropriation of Indigenous myths. I took legal advice on this and was advised to reject such stories unless it was accompanied by a message from the appropriate elder of the tribe who ‘owned’ the myth. It’s a long story that one, but essentially it boils down to an Aboriginal sense of ownership, thus, in a sense, we’d be involved in plagiarism if we published Indigenous myths.
The next problem we faced was, sad to say, writer intransigence.
Our strategy called for us to tentatively accept stories that we thought were encouraging, with the intent of editing them into something we thought was publishable. On three occasions, we accepted stories but were faced with an author who refused to have their story edited – if we’d accepted it, surely it was already good enough, was one response. These stories were then rejected.
By the time the submission period ended we had about 20 stories that we thought had potential. With the anthology limited to 50,000 words, some stories had to miss out. The editors all chose their favorite, and then we nominated our best of the rest. We ended up with 13 stories, all of which I think have merit. It’s a reflection of editors’ tastes that the collection is somewhat eclectic, but I think that adds to the appeal of the anthology.
Would we do it again? Yes. Let me reveal here – omg a scoop! – that we have considered a second anthology with the theme of muses and mentors, again referencing our  penchant for mythology and Joseph Campbell’s work on the hero’s journey. Perhaps later anthologies will follow this journey and use themes about archetypes or crossing thresholds or returning with the elixir. We’ll wait and see.
All the editors at The Specusphere learnt a great deal from the process. It was an interesting journey, personally and as a team, and I’d encourage budding editors to get involved with an anthology, either at The Specusphere or elsewhere. It is great experience.
Stephen is a freelance editor, and has been involved in writing in many different forms for most of his adult life, in free-form prose, short fiction, novels, scriptwriting, government reports, essays. His first poem was published in 1978. He read poems at the inaugural Festival of Sydney and wrote songs for a blues band in the late 70s. His publication credits include short fiction in anthologies in Australia, England, US, and NZ; a self-published novel called Gilgamesh (see esstee media site for reviews and excerpts); two radio dramas; and a short film for SBS.
He has a diploma in editing and publishing. He formed esstee media in 2003. The website is at www.essteemedia.com
Posted by Sue Bursztynski at 2:00 AM