Kelly Dillon’s contribution to Mythic Resonance was a tale of abuse. Who was abused? The Valkyries, those warrior maids – and barmaids! – of Norse mythology – and yes, that business about Valkyries as servants in Valhalla is absolutely right. Imagine what it would be like to drag some hero off the battlefield and then have to be his waitress for all eternity! And, as Kelly suggests, not all these heroes would have been Siegfrieds. All the gods would have wanted to help them out on the last day was "strong and willing to fight". Louts, in other words.
If your only experience of the daughters of Odin is Wagner, take a look at Kelly’s story and think again. There's a link to the Mythic Resonance samples above. Meanwhile, let Kelly tell you about her story herself.

I've often had my head stuck in the past, usually more so than was good for me.  For the most part it's been the myths that have enthralled me, and I've felt envious of these ancient peoples for whom the world was a much more interesting place.  We have our own modern 'urban myths', but the term has become almost synonymous with fictions that only the very gullible would believe.  And in those stories there are usually only victims, no heroes.
We may have proven it was round, but when did the world become so flat?
Yet these old stories must still sing to us, to some part of our buried psyche, or they would not have endured for so long.  Speak to anyone and they will know of Pandora, of Medusa and the great Norse gods who step between worlds.  There is something in our blood that needs myths, even if our modern sensibilities compel us to chuckle afterwards and say, "Oh how quaint".
I wasn't quite willing to let it go at that.  I spent years at university studying history, archaeology and then Egyptology, always with a focus on the myths.  I began writing, re-telling, trying to make them more accessible.  Most of my short stories now fall firmly within the category of mythic fiction and range from the well-known Grecian to the significantly more obscure 'Popol Vuh' of the Mayans.
Sometimes I bring the stories into modern times: What is Prometheus doing now?  (Find out in 'Spirit Legends: Of Ghosts and Gods')  Or what would happen to a modern father who made an Orphaic descent into Hades in search of a lost son?
Other times I enjoy taking the original and twisting it, just ever so slightly, until something that was once familiar becomes a new story with a different purpose.
Such was the case with the story that was accepted for the' Mythic Resonance' anthology.
'In Paradise, Trapped' exists within Norse mythology where Valkyries ride the skies above battlefields and the gods fear their deaths with the coming of Ragnarok.  It's a fortuitous time for a story of its origins to be in print, with the release of 'Thor' ensuring that anyone who has seen the movie with a passing interest in mythology will now know of the nine worlds of the Nordic universe and the Bifrost rainbow bridge that connects them.  They may even be familiar with some of the words, such as Yggdrasil, Midgard and Mjolnir, although how to pronounce them is a different kettle of fish.
In this universe it is known that quasi-angelic female warriors called Valkyries collect the souls of heroic men who have died on the fields of war and usher them into an afterlife of paradise within Valhalla to stand ready for the final battle at Ragnarok.  As such, modern culture has glorified them until they are considered nearly goddesses in their own right.  However, this was not always the case.  Old images exist of the Valkyries within the halls of Valhalla, after their brief task upon the earth, acting as servants.  In fact, one of the names by which they used to be known was "Odin's Maids".   The dichotomy of it struck me; that beings of such perceived power could in fact be bereft  of it where it mattered the most, in their own homes.  What would the lives of the Valkyries really be like and would they be content with it?
The overwhelming answer, as it occurred to me, was 'No!'
In this way, 'In Paradise, Trapped' evolved into something of a story of domestic abuse - a perspective that is unfortunately still extremely relevant in modern times.  It is set at the tipping point between being unable to bear any more and deciding to do something about it, regardless of the consequences.  The protagonist is uncompromising not due to a flaw in her nature, but by having being driven to a point where any action is better than none, and any decision is preferable to spending time weighing options.  It's a clarity of resolution that will resonate with any person who has ever found themselves in a desperate situation.
And that's the purpose of myths in the end - to show us facets of ourselves.  Whether they're heroes or martyrs, questers or sages, we can all relate in some measure to the archetypes of humanity.  We should openly celebrate our myths, for they have been with us from before we lived in caves and will exist long after we've pushed to the stars.
Kelly Dillon is a sci-fi fan and self-confessed geek.  She is an Archaeology graduate with a Masters specialisation in Egyptology, which encouraged a strong interest in ancient cultures and a tendency to see our own civilisation from an atypical point of view.  This has resulted in her writing often focusing on the theme of sacrifice and the grey areas within morality.  She has been published twice before in anthologies and is currently hoping to publish a novel dealing with the Nephilim and fall of angels.  In her lighter moments she works on a comedy based on the drunken adventures of a not-very-angelic angel as he attempts to avoid his heavenly duties.
SUE: Kelly is too modest to include any links, but while I was trying to find a picture of her on-line or at least a book cover, I found some of her published fiction on-line. I hope she won’t mind my including this link to Residential Aliens, but there are several samples of her work on this web site and the story I’ve linked to is about the kind of ball game they played in ancient American civilizations where the losing team ended up sacrificed to the gods. Go check it out!


Postscript: I forgot that Kelly had sent me a photo of herself. Here's a pic of her being very Valkyriesque, without the barmaid thing! 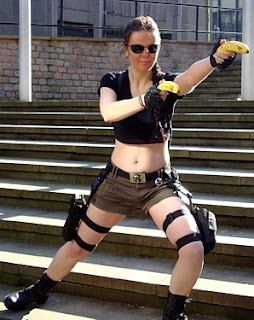 Posted by Sue Bursztynski at 2:36 PM

Great post and pic, Kelly! I loved your story, and must admit that I had always thought of valkyries in heroic vein so 'In Paradise, Lost' made me re-think. Many thanks!