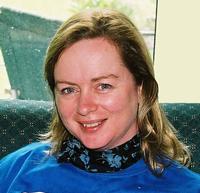 Donna Maree Hanson is an Australian writer, editor and publisher of speculative fiction, who has been active since 2000. She has sold mainly short fiction, but has also written a book-length overview of Australian speculative fiction (2005).Most recently, her story "Through These Eyes I See" has appeared in Mythic Resonance. It offered a twist on the Medusa myth, in which the heroine heals with a look rather than turning to stone. I thought the mirrors were a particularly nice touch to the story, when you remember the role played by a mirror-polished shield in the original myth – and again it was a twist, as the mirrors protect the heroine rather than the monster-slayer. And personally I have always felt sorry for Medusa anyway.
Welcome to The Great Raven, Donna!

Many thanks to Sue for inviting me along with the rest of the Mythic Resonance crew to guest post on her blog.
When the call came out for Mythic Resonance, an anthology of modern-day takes on ancient legends, I was pretty stumped for an idea. It was a bit of a challenge to think up something new and fresh from something that is so old and so much a part of the modern myth as to be easily recognisable. People have done it but it was a new thing for me.
Then one day I was taking a long walk to visit my mother at the nursing home and , as often happens to me while walking, ideas floated up to the surface. There came to me a vision of the girl in a room full of mirrors, a prisoner of her own gift for healing. To me that legend of a healer or the myth of the healer is something that repeats itself so often as it is so much our own desires to find the obtainable cure. To me that was the core centre of this revisiting of a rather generic myth of a healer.
Initially, the story was rejected because the link between what I was writing and what the anthology desired was tenuous. However I was told that all the readers loved the story. I did not argue with this proposition and accepted it even though to me there was clearly a link but I understood that link was not specific enough. Later the editor wrote to me and asked me for the story back because the editor and his team had established a link. (Obviously they had not forgotten the story).  I then did a little bit of research on the angle of the Medusa myth and how "Through These Eyes I See" used and abused the resonances of that ancient story. Mandy does not kill with a look, she cures. The mirrors help her survive, help her to see as others do. When the modern day Perseus comes, he’s not a hero with altruism pulsing in his breast, but something that Mandy cannot abide to touch or to heal. He’s the representation of exploitation, of corruption, of power...
"Through These Eyes I See" is also about exploitation. Mandy has a gift and others exploit it. There is no joy in her gift for her. Its appearance robbed her of a normal life.  There is no benefit for her.  She is a prisoner of those who are meant to love and protect her.
I'm proud of the story and am really happy that Specusphere published it in this anthology.
If you want to know more about me and my writing I keep a writing blog at:
http://donnamareehanson.wordpress.com 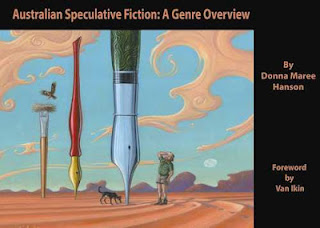 Posted by Sue Bursztynski at 3:08 AM