What a week! One book after another!

This week has been full of interesting and enjoyable events for me. Last Saturday, I went to the opening of Chuck McKenzie's new bookshop(see report). I am now reading and enjoying a fascinating book I bought there, on Voodoo practice in New Orleans, written in the 1940s, when the author was still able to interview people who remembered it in the 19th century.

Sunday I met three delightful former students of mine, Taylor, Brittany and Paige, to hear American YA vampire novelist Claudia Gray, author of the Evernight series. I have read two of the books and actually enjoyed them, more than many other YA paranormals, because like Alyxandra Harvey, this writer has a sense of humour, and when you're an adult reading your way through a mountain of teen paranormal romances, that is soooo important! The girls turned up an hour early and I had to tell them to stay where they were on the platform and wait till I came back from Lonsdale Street to meet them. Thank heaven for mobile phones! :-) They weren't familiar with Metcards and I showed them how to validate.

We went to Collins Street for lunch at the Australia food court, then for a browse in Dymock's before the event. The girls pounced on books they liked with squeals of delight. Taylor wished she could live around the corner. :-) Paige and I drooled over recipe books. Then we sat in the shop's cafe for afternoon tea till time for the event. The staff set up seats near a small stage, very informal and pleasant. Claudia Gray was a delightful speaker and answered questions in her humorous way. One story she told was about how, on her last visit to Australia, she searched fruitlessly for a copy of the newly-released Mockingjay. Everywhere had sold out! She finally found it in Perth, on the very top of a high book case, and risked life and limb climbing up to get it. Personally, I would have smiled sweetly at a nice, tall young employee and asked them to get it for me, but each to their own.;-) and it did make a good story. Claudia is working on a new series, this time with a witchcraft theme. It sounded just a little like Van Badham's Burnt Snow; I will watch for it with interest.

Monday I went for the launch of the new Leanne Hall novel, Queen of The Night, sequel to This Is Shyness, which I have finally begun to read and am enjoying. Before going to Readings in Carlton, I met for tea and sweet stuff with Melpomene, my Twitter buddy, and Braiden, a young man who reminded me we had met at the kaffeeklatsche for Marianne De Pierres last year. He was gloating over his free ticket to The Hunger Games movie and planning to see it twice.

The launch was enjoyable - I met Michael Pryor, Cath Crowley, who was launching the book and had a chat with Fiona Wood - if you'd dropped a bomb on Readings that night you would have wiped out a large portion of Melbourne's YA writers! ( Heaven forbid, by the way!) I had brought both of the library's copies to be signed, but it was hot, I was exhausted after a long day and then having to stand for the launch (the shop might, perhaps consider putting out chairs for its next writer event. Please?)and after seeing the looong queue, I went home for a shower and bed. 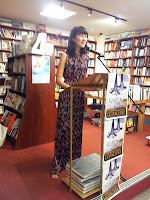 Tuesday night I went to a teacher event at the State Library. We are taking the Year 8 students next term for a free viewing of the Persian exhibition and Comic Life workshop, so I thought I'd better go. They fed us and handed us a raffle ticket for a door prize and guess who won a gorgeous exhibition catalogue? It will get good use. I have already used it to convince a reluctant student that it might be a nice excursion after all. We got to see the exhibition without having to compete with hundreds of other viewers. Nice!

Now it's Saturday morning and later today I'm going to see if I can catch The Hunger Games. I read the entire trilogy in three days one summer and the trailer looks very faithful to the book.
Posted by Sue Bursztynski at 2:02 AM