So, what's a hero anyway? Steven Gepp on Glorious Destiny 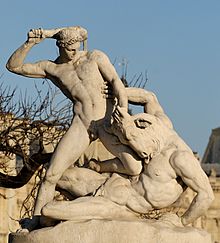 So, what is a hero? Greek myths are full of them, usually the sons of gods and mortals. To be fair, the heroes who slay monsters in Greek myth usually do it for a reason. Heracles is bound to do his Twelve Labours. Theseus wants to get out of the Labyrinth and, let's face it, the Minotaur has been eating teenagers from Athens and it just has to end. Perseus cuts off Medusa's head as a challenge and to get his throne back. But you do have to feel sorry for the monsters. How would you feel if you were minding your own business lurking in some cave and some big lout decided to come and try cutting your head off for reasons nothing to do with you?Of course you'd turn him to stone or breathe fire on him or gore him to death! Steven's "hero" is not a nice young man at all - but are any of them?


My story in Mythic Resonance is called 'Glorious Destiny'. It's about a deliberately unnamed Greek youth of ancient times who wishes to emulate his heroes by slaying a monster, but the monster is maybe not as monstrous as thought and the act of heroism may not be heroic after all.

I wrote this story in a roundabout way. First, I came up with the idea for the monster. That image then lent itself to an ancient Greek setting. So I asked myself what would he be doing? How would he come into the world? I wrote a bio for the being, and then the story grew from there. The monster, though, had  two fathers. I thought it would be one of those Greek god things - they did that sort of thing just to mess  with mortals from time to time. I actually stole the concept from a Chinese creature which was born of two fathers, and whose name escapes me at the moment. It was created by 2 male deities to prove to the females they were not needed. Gotta love misogyny and stereotypes in ancient mythologies!

Fantasy - which this clearly is - is one of the genres I like to write in, though I have had more success in the horror field., and a little with science fiction. What I liked most about this anthology, though, was the fact it is Australian - so little of my work gets published in this country. And they have really done an impressive piece of work. I feel a little embarrassed that my story was included in this. But it also gives me hope, for there are clearly a number of talented writers of speculative fiction in this country, so maybe one day we can rise up and make ourselves better known.

As to writing, as well as the short stories appearing in a number of anthologies, I also maintain a writing blog, Confused Ramblings which is something new for me, insisted upon by a publisher, and for an online popular culture website,  Inside Pulse. Yes, that last is professional wrestling, and, yes, I do get into the ring at times. We all need a hobby, right? My ultimate goal is to have one of my many
novels published. And thanks, Sue, for letting me have a little talk about my work.

Posted by Sue Bursztynski at 4:04 PM

Enjoyed your story, Stephen! Nice to learn a bit more about you here.