Yesterday I made it to the opening of Notions Unlimited, a brand new SF bookshop in Chelsea, Melbourne. Sorry, I had too good a time to remember to get a pic with my phone camera, so here's a photo someone else has taken on another day, already up on Google Images. Nice, huh? That TARDIS hides the back room. 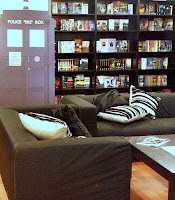 Of course, it wasn't empty like this! The place was hopping, because Chuck McKenzie and his partner had let everyone know. I sat on the sofa in the picture, chatting with a couple of other fans. It's such a nice idea, reminds me of Slow Glass Books, which was a shop in the city, on the site of the old Space Age books, before the rent was tripled and it had to move to the suburbs. When you're trying to decide what to buy, it's nice to have a spot to sit and check out the potential purchase. Not to mention socialise. Justin, who owned Slow Glass, regularly found his shop the site of a mini-convention, and I actually overheard someone say, "This is like a mini-con," at this event. There were writers galore and, more importantly, readers.  Lots of readers.

As when Chuck was in Southland,  there was a section for Australian small press. There was Ticonderoga, Ford Street and many, many others, showing what a vibrant small press culture we have here, and it's a service both to small press publishers and readers to make these books available in the shops, instead of just at conventions and by order.

There is also a "New Age" section which includes all the religious and folklore stuff I like to use in my research and I am told this section will be expanded. I bought two books about voodoo, one about the gods of Haiti, one about voodoo in New Orleans. I have never intended to do any fiction on zombies, but if I do, I intend to get it right, with research. I know a little, enough to have done a chapter on zombies in my first book, Monsters And Creatures Of The Night (and got a delightful fan letter from a child who asked me if I could send him a picture of a real zombie. He had to settle for a letter and a bookmark or two). The books looked fascinating and I just couldn't leave them on the shelves. (I may take one to read later today when I head for the city to meet my students Taylor, Brittany and Paige and go see Claudia Gray at Dymock's.)

I also bought a Stephen King short story collection for my nephew Max, who is just getting into this writer. He may have to wait till I've read it myself, but I think this is one I read years ago, so it won't take long. There's a set with nice new covers, very simple. Stephen King doesn't need scary stuff on his front covers any more - people know who he is and can use their own imaginations, which are much stronger than any cover could be. I took a business card for the shop so I can contact Chuck later for my school. We have one old, battered copy of Christine on the shelves and people keep asking for the books and I haven't found them elsewhere so far.

From the small press shelves I picked up a copy of Alan Baxter's Realmshift, which looks like fun.

With four books in my bag, I had to be strong!Thank heaven the bookshop is in the suburbs, where I can only get now and then, because I'd have a hard time resisting. But - no! There's still Of Science And Swords Bookshop in town... And I do love small bookshops whose owners you can see at the counter!

Posted by Sue Bursztynski at 3:05 PM