A to Z Blogging Challenge: U is for Urban Fantasy

Lacking an Aussie children’s writer whose name starts with U(if there is someone I’ve forgotten please let me know in the comments)today’s post is about urban fantasy by Australian children’s and YA authors. I’m going to treat it broadly, as fantasy set in the city. None of the authors I’m going to discuss writes stuff about fairies or native spirits lurking in towns, the usual theme for urban fantasy.

I’d like to mention Michael Pryor’s Gap Year In Ghost Town, but I’m still reading it, so a mention is all it’s getting for now. Expect a review later.

So... I’ll be talking about Justine Larbalestier’s Magic Or Madness trilogy, Isobelle Carmody’s Greylands, Foz Meadows’ two books of The Rare which should have been a trilogy, but was cut off abruptly when the author moved overseas, and Saltwater Vampires by Kirsty Eagar.

I once heard Justine Larbalestier speak at a library conference, where she expressed contempt for the kind of novel in which the problem with using magic is getting a headache. “I get worse than that with a hangover!” she snapped. So, for her trilogy, which is set between Sydney and New York(she actually spends half her time in each city, since she married American YA novelist Scott Westerfeld), she decided that if you were born a magically gifted person, you would really be on the horns of a dilemma. If you use it, you die young. If you refuse to use it, you go mad. That has happened to the mother of teenage girl Reason Cansino, who has been running from her own mother and away from magic. When her mother is placed in a mental hospital Reason goes to live in Sydney with her grandmother, Esmeralda. And one day, she opens a back door in Sydney and finds herself in New York... As she finds out, in the course of the trilogy, it isn’t her grandmother who is her problem, it’s another family member...

I adored the idea of having a real problem with using magic. It’s the most unusual magic issue I’ve come across in YA fiction. And our students who read it loved it.

Another Larbalestier urban fantasy, which was great fun, was How To Ditch Your Fairy. Imagine a world in which you have your own personal fairy. Not the kind with wings, or even the dignified Galadriel type. It’s an invisible fairy that gives you one particular skill, and you don’t get to choose what it is. Fourteen year old Charlie is stuck with a parking fairy, which means that whoever is driving a car she is in finds a parking spot immediately. At fourteen, she can’t drive anyway and the damned thing gives her a faint smell of petrol. She is researching ways to get rid of it, and hopefully be chosen by a more useful fairy, like a hair fairy that will make her hair look good, or one that will help her find great clothes while shopping...

A rather sadder urban fantasy is Greylands by Isobelle Carmody. Isobelle is best known for her Obernewtyn series, which have been published all over the world. Greylands is a stand-alone novel which went out of print, before being reprinted by small press Ford Street Publishing a few years ago. Here is my review of that edition. The hero, Jack, has lost his mother after an accident in a fun park. Afterwards, his father has found it hard to smile or relate to Jack or his sister, Ellen. Jack finds himself slipping in and out of the “Greylands” while trying to come to terms with his mother’s death. There are very few humans around, though he meets a little girl, Alice, with a bundle she refuses to put down. The novel is very literary. It is implied that the Greylands are connected to depression. The author wrote an introduction to the new edition, suggesting it was very important to her and connected with her own life as a child. Check out my review, for more details!

Foz Meadows’ two vampire novels came out when Stephenie Meyers’ Twilight series was huge, which meant that her books got placed next to Meyers on bookshop shelves. A matter of luck, since Foz Meadows is her real name.

The Rare is set in Sydney. It doesn’t have sparkly vampires or gorgeous vampire males who can father children despite being dead, so no blood circulation, right? In fact, in the first book, Solace And Grief, the heroine, Solace Morgan is very unusual in having been born a vampire, because vampires have trouble producing children, and it killed her parents. As she grows up, in foster homes and share housing, she finds herself having problems going out during the day and gradually unable to eat regular food. Vampires in this universe, don’t usually drink human blood if they can avoid it, because it’s like heroin for them. Forcing them to drink human blood gives power over her followers to the head vampire.

In her share house, Solace discovers that her housemates are also unusual. One of them, for example, turns into a cat. Not a majestic panther or lion, but a giant house cat. It’s embarrassing!

Oh, and there are dungeons under Hyde Park in Sydney, and a vampire colony, and a portal to another world... Here is a link to my review of the first book and here is another link to a guest post the author wrote about both books.

Alas, Foz went to live overseas and, because she wasn’t around to help promote her second book, it didn’t sell as well as the first one, so Paul Collins reluctantly told her he couldn't publish the third and suggested she publish that elsewhere. I don’t think she wrote it, as she has done some more books since then and none of them were that third volume. So be warned, the second book, The Key To Starveldt, does end on a cliffhanger. You can still get the others from the Ford Street web site and in ebook from pretty much every ebook site. 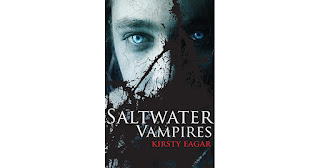 Saltwater Vampires is great fun. It’s set in a small town on the coast of New South Wales. You will have heard the story of the Batavia shipwreck in Western Australia back in the 17th century, in which dreadful things happened when a bunch of mutineers killed half the survivors of the shipwreck while the captain was off in a boat looking for help. No? Buy a copy of my children’s book Crime Time: Australians Behaving Badly! There is a chapter about it. You can get it in print or ebook, on any book web site or for any platform.

So, about Saltwater Vampires. In the present day, there is a small town that has an annual music festival. The festival is huge, and people come from all over to attend. And there are vampires in town. They are Batavia mutineers who are still around after centuries, because they're vampires - by choice. What better place to get away with a massive feeding frenzy than in the middle of a festival? The young hero, Jamie, a surfer, is about to be turned. His best friend has already turned. There is a way to stop it, but there's a time limit - and if he doesn't do something, everyone in town is going to be vampire fodder by New Year's Eve.

What tickled me in particular is that in this universe you can’t just become a vampire and you definitely can’t just turn someone else. That is, you're not allowed. You have to serve your apprenticeship and then register with the vampire union/guild in Amsterdam, with the silly name of Piravem(jumbled Vampire). The Batavia guys are in big trouble with the union!

And here's my review of this book.

I hope you’ll check out one of more of these books! I loved them all.
Posted by Sue Bursztynski at 3:10 AM

You know I never know about half the aussie books you mention in your blog and that makes me sad. There is just so much talent. I will definitely look into some of these books.

There should be copies in your local library. Go for it, Lan! :)

Some very interesting choices! I'm always impressed when authors can take well-worn characters such as vampires and give them a new spin. Thanks for the suggestions!

Your nod towards Justine Larbalestier interests me - I can see the library being pestered by me as the weeks go by!! Cheers Hilary

Hi Jenny! Yes, vampires are a well-worn theme in YA books, aren’t they? But girls like their romantic vampire men, so those keep being written about. As an adult, I did appreciate the new spin! Not sure who liked it at my school.

Hi Hilary! No, I haven’t come across Jacqui’s posts, thanks, I’ll check it out. I am sure the library staff will be delighted to be pestered by you! As a librarian myself I love to have library users ask for books. If they don’t have them, they will get them in for you.

Great post, Sue. I'm excited to find this. Who knew Urban Fantasy was so popular!

Hi Kali! Oh, yes, it’s HUGE, especially in my own area of YA. There is plenty more I could have mentioned, such as Rebecca Lim’s Mercy quartet, though that perhaps belongs more to the sub-genre of angels.