A To Z Blogging Challenge: T Is For P.L Travers and Shaun Tan

You have very likely read one or more of the Mary Poppins books in your childhood, or seen the movie. You may even know the author was Australian, though she spent her career in England, but a lot of Australians in those days still referred to England as “Home” anyway, and her father was actually British.

P.L Travers was born in Queensland in 1899 and lived to be 96, so if you’re older than 22, the author of Mary Poppins was still around in your lifetime. She was born Helen Lyndon Goff, but later changed her name to Pamela Lyndon Travers as a stage name, so she could pursue a stage career of which her family didn’t approve. She was a professional Shakespearean actress, among other things. She was a fan of J.M Barrie, the author of Peter Pan and, interestingly, her first publisher was one of Barrie’s wards, who inspired the characters in Peter Pan. (I know how you must have felt, Pam! I remember when my first book sold to Allen and Unwin, the original publishers of the amazing author J.R.R Tolkien! Yay!).

It would be nice to say that Travers was a sweet lady who told stories to children, but no. She was a HUGELY grumpy person I’m not sure I would have wanted to hang out with. It took twenty years for Disney to get the rights to Mary Poppins, and when he did, finally, she hated the film, especially the animation. Really, what was she expecting from a Disney film? No animation?

It is true that the novels are darker than the film. Not dark, so much, as that you will never see the book Mary Poppins dancing with chimney sweeps or singing to cute birdies. She arrives unexpectedly, leaves when she says she will and never, ever admits that any of the children's over-the-top adventures have actually happened.

Someone has put up a YouTube video with snippets from the movie and scary music, suggesting that, looked at a certain way, the story of Mary Poppins can be nightmarish!

I do recommend the film Saving Mr Banks, a Travers biopic with Emma Thompson, showing some of her early life in Australia, suggesting a relative might have inspired the Mary Poppins character, but mostly about the making of the film. During the end credits, you get to hear actual recordings of the author’s voice while she was in America, so don’t leave or switch off before they are finished. It’s a feel-good movie, though it doesn’t mention that her behaviour totally put Disney off making any more films in the series. It does tell you, correctly, that she wasn’t invited to the premiere, but went anyway.

Shaun Tan says that adults and children alike can enjoy his work, and it’s true, we can. But again, we come back to things like Asterix, enjoyed by kids and their parents alike - children see one thing, adults another.

Shaun comes from Western Australia, though he now lives in Melbourne. He has worked both as an illustrator and an author-illustrator. His first cover was for SF semiprozine Aurealis when he was only  sixteen! He has come a long way since then and won awards, including the Astrid Lindgren Award, the world’s biggest award for children’s literature, and, in Australia, the CBCA Award for Best Picture Book, in 2007.

A number of his picture books have been dramatised. The animated film of The Lost Thing won him an Oscar.  It is a story which might just be “what I did on my holidays” except that the Lost Thing is a huge, red - thing. I’ll let Shaun Tan tell you about it himself. In fact, his web site tells you in great detail what he had in mind with each piece, so go and have a look and I’ll tell you instead about Shaun Tan and me. Such a nice man, by the way. The evening I had my book signed by him, he was looking at a portfolio of drawings by a young fan who was just ahead of me, and giving her his time despite the queue. They were very good; I may see her work in print some day.

The most recent of his books I have is The Singing Bones, which I bought one evening at the Melbourne Writers’ Festival and had him sign for me. In it, he tells snippets of fairy tales, but the most amazing aspect of it is that, instead of illustrations, he has created 75 clay figurines and photographed them. Here is one.

He has done some books with plenty of writing in them, such as Tales From Outer Suburbia, and illustrated the work of John Marsden, The Rabbits, an allegory about colonisation. He did the cover of Ford Street’s Rich And Rare anthology and a delightful short story in it. (I have a story in there too!) 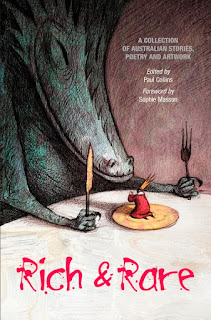 But his book that resonated most with me had no words at all. It is The Arrival. I first saw bits of it at Swancon, the Western Australian annual science fiction convention, where Shaun did a presentation about it. I was enchanted! 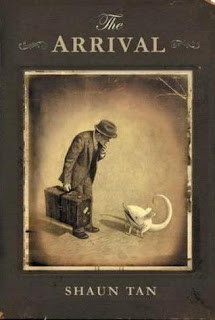 I bought it for my library because it was on the CBCA Shortlist for that year(it won). My school got some copies for the senior students because there was a lot to discuss in it. I remember my library technician and I “reading” it together when we bought it. It took us about an hour, quite a long time for a book that told its entire story without a single word of text.

What is it about? It’s a story about immigration and being a refugee. A man flees a country where dreadful things are happening(dragons seem to be involved). He comes to another country, which could be anywhere, though again there are hints - a giant statue, and a hall inspired by the one at Ellis Island, though it may simply be because that’s what we think of when we think, “Immigration”. He settles in, meets fascinating people and adopts a pet which is no animal we know in this world and, eventually, brings his family out to join him. A beautiful, moving  story and not a word in it. In fact, it became a play, which I went to see, and that didn’t have a single word in it either, just music and sounds, and the way people looked and moved. Check out this Youtube video . There are more, but this will show you the books breathtaking art.

A wonderful Aussie children’s author! Go check out his web site(see above)and then buy his books from any book web site or your local bookstore. You won’t regret it.

And here is the Amazon page for Mary Poppins, though you can also get it on iBooks and  buy from other sites. I bought the whole collection under one cover on iBooks.
Posted by Sue Bursztynski at 3:22 PM

I tried to re-read Mary Poppins when my children were born -- alas, they didn't stand up as well as I remembered. And I'd bought a huge omnibus version of all the books which now stands guiltily on my book shelf. Oh well, they were a part of my childhood so I'll keep them.

I did enjoy Saving Mr Banks (mostly). It sounds as if Pamela had quite a sad and strange life in the end. Emma Thompson made her sympathetic, though!

I grew up in PL Travers home town, although not much was made of her birthplace until after I left home. Now, of course, there is an annual festival. I vaguely remember reading the book (?) but as I love the movie I can't be sure I haven't twisted the memory. I'm still to watch Saving Mr Banks, but it's on my to-watch list.

I think you will enjoy Saving Mr Banks. There was a lovely scene in which Walt Disney speaks to Travers about how he sees the story - that it’s about saving Mr Banks, who has nothing in his life but his bank job, which is not a pleasant one. This scene never happened in real life, but it was a nice one. And Emma Thompson was wonderful in the role. And the scenes with the earnest, skinny young Sherman brothers who composed the songs was delightful.

I love so many of the books of this author.
Sorry, i have been unwell last week and could not comment on your posts.

Mary Poppins books were a huge part of my childhood. And I liked her grumpy. In fact, I loved that she was always grumpy and secretly very cool. It was lovely. Which is probably why I have a burning hatred for the Disney movie :D Didn't know that much about the author's life, though! I recently bought the collected volume. I wonder what it will be like to read them as an adult :)

I suspect you would get on very well with P.L Travers. ;-) I have the lot under one cover too, in ebook. I haven’t read them since I waa a child, so we’ll have to see how they hold up. Books don’t always read as well when you are grown up. Sometimes they do! I admit, I do love the film, as a work of art in its own right, like Bladerunner is VERY different from Do Androids Dream Of Electric Sheep, but I love both.

I am so happy I found your blog (AtoZ).

I've never read Mary Poppins or any of the author's other work. As a kid, I was much more interested in Tom Swift Jr. series. 33 SciFi books. No idea how many I read, but I still have some. I should look for them and see how they hold up.

Welcome to my blog, Stu! Everyone reads different stuff growing up. I read Enid Blyton and pony books, but also Robert Graves and Mary Renault! I didn’t discover SF till I was about twelve, when I found Jules Verne and an author called Donald Suddaby, then The Time Machine and Isaac Asimov(I was about 18 by then...)

I did not realize that P.L. Travers was Australian! I read the books and enjoyed them as a child. Don't know if I saw the movie or not, I know I've seen snatches at least.

The author Shaun Tan sounds interesting. I only Hansel and Gretel had looked up from eating the house!

Hi Kristin! Yes, you don’t expect the author of novels set so firmly in England to come from Queensland, do you? I love that book, Shaun Tan is amazing! I treasure my signed copy.

Hi Sue - I know PL Travers ... and saw the Mary Poppins film (Saving Mr Banks) - which was interesting ... I can't quite my head into Emma Thompson - not sure why ... but there 'tis. But Tan certainly sounds interesting and another author I need to look into more ...

I hope you will discover Shaun Tan! An amazing artist and writer!