A To Z Blogging Challenge 2018: Y is for Erica Yurken 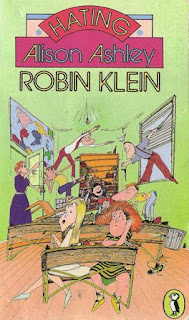 Erica Yurken - unhappily stuck with the nickname Yuk - is the heroine of Robin Klein’s very funny middle grade novel Hating Alison Ashley. If you’ve seen the film(in which I was an extra!)you may be confused to hear it called a middle grade novel, but it is. The primary school children in the book were upped to their teens for the purposes of the film and Delta Goodrem got to be the title character. Never mind, it’s fun, however old the kids are.

Erica Yurken is a student at Barringa  East Primary School. She wants desperately to be a famous actress, and considers herself a cut above her classmates. The only problem is, this is not suggested by her embarrassing family - a little sister who plays at being a pony, a couple of positively vulgar older siblings and her mother’s embarrassing truck driver partner, Lenny.

But Erica has always thought of herself as doing fine at school until the arrival of Alison Ashley. Alison Ashley... rich, beautiful, talented and, dammit, a nice person! How could Erica not hate her? She is everything Erica would like to be.

But Erica has one thing Alison doesn’t: whatever she thinks of them, she has a loving family. Erica may not be much of an actress, but she can write a play, as she discovers, and her family are so very proud.

And somehow, in the course of the novel, leading up to the school camp and the performance of Erica’s play, the two girls become friends...

Robin Klein, as you’ll see if you check out her list, has written a lot of books over the years, some funny, some serious, but I believe this one is her classic, despite being snubbed by the CBCA judges, who promptly gave her a prize for a serious book later on. And that was a great book too, but this one is warm and gentle and puts a smile on the reader’s face.

You can buy this book very easily on line - Amazon, Book Depository and Booktopia all have it, in print, ebook, audiobook and I see there is even a play version of it! And by the way, the film is a delight, despite the changes. If you get a copy of that, you will see the school where I worked from 2006 till last year, though it has been dirtied up. It’s very much a working-class disadvantaged school. It was knocked down and is in the process of being rebuilt, so the film of Hating Alison Ashley is the only way you can see it now.


Here's the film trailer - you'll see my school in the middle of it. I promise it was never that messy!

Posted by Sue Bursztynski at 4:36 AM

Hi Sue - what a great film trailer ... looked like so much fun to be involved with ... loved seeing it and then reading about the Erica Yurken series ... Yuk or not! Cheers Hilary

Sounds like a great book. I'll have to check out the movie. :)

Hi Hilary! It was fun to be involved. It was a beautiful day and when we weren’t doing the crowd scenes we just sat in the sun and sipped coffee, watching the kids. Delta Goodrem, who was huge at the time, was really nice to our students, who were fans.

How fun that you have a personal connection! What a perfect choice for Y.

I really am going to have to track down this movie.

It is a lot of fun - and I suspect your young, male Barbarians wouldn’t enjoy the book anyway. Glad to see you feeling better.