A to Z Blogging Challenge 2018: F Is For Fox, French and Flanagan!

First, picture book author Mem Fox. You probably know her best for Possum Magic and Where Is The Green Sheep?  which I reviewed - very enthusiastically - many years ago for January Magazine. Who would have known then that it would become such a classic? https://www.januarymagazine.com/kidsbooks/whereisgreensheep.html

Possum Magic, which she wrote with illustrator Julie Vivas, is the story of a small possum who becomes invisible and has to travel Australia tasting many Australian foods to become visible again. It’s sweet and charming and still being read by parents and children thirty-five years after its first publication. 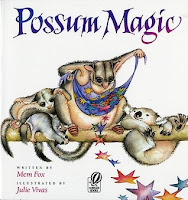 Where Is The Green Sheep? was published in 2004 and has also become a classic. It is one of those books you read with your toddler. This one is illustrated by the delightful Judy Horacek, better known for her gentle feminist cartoons. The young audience is invited to search for a green sheep among all those multicoloured sheep romping on hillsides, fixing cars, going to space, skiing... Needless to say, it’s still in print, not only in Australia. Mem Fox is a much loved writer who has made it more than once into the list of Australia’s favourite writers, an annual vote by readers of the Booktopia web site. 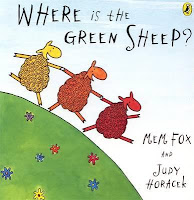 Multi-award winner Jackie French has written many historical novels for children and teens, though she has recently also done some adult historical fiction, the Miss Lily trilogy, which I’m reading. She is one of the few historical novelists my students will read, by the way. She has done a lot of novels about Australian history. There is a trilogy, Hitler’s Daughter, Pennies For Hitler and Goodbye, Mr Hitler, which all have Australian connections and end up in Australia after the war. A Rose For The Anzac Boys is a YA novel about three girls running a canteen for wounded soldiers in France during World War I. That, too, has Aussie connections. Nanberry : Black Brother White is set during the days of the First Fleet, as seen from the viewpoint of an Indigenous Australian boy being brought up by the surgeon. He eventually becomes a sailor. Both characters were real people.

But she has also written novels set anywhere from ancient Egypt to mediaeval Scotland, and some fantasy fiction. One of the most popular of her 140 books is a picture book, illustrated by Bruce Whatley, Diary Of A Wombat. Not surprising, as she lives with wombats and tweets about them most days!

John Flanagan is the author of the hugely bestselling Ranger’s Apprentice and Brotherband series. They read like YA, but were originally written for younger readers. In fact, when I was reading for the children's section of the Aurealis Awards the other year, one of the Brotherband novels made it to our shortlist. The hero of Ranger’s Apprentice is Will, an orphan in a mediaeval universe. In the course of the series he grows up and becomes a Ranger, one of the King’s law enforcers, trained by Halt, a likeable and cheeky man who really knows his business. Will is small, but agile and intelligent. The author originally wrote it for his son, who was himself small and needed to be persuaded that small people can do great things too.  The novels are exciting, but also funny. Although they are set in an alternative universe in which coffee is available in a sort of mediaeval Europe and women are allowed to play active roles in the England equivalent, Araluen(the name, by the way, of a town in NSW!) there is very little actual fantasy in these books. There is some in the first two books, which feature telepathic beings working for the villain, but after that, it might as well be historical fiction.

Brotherband is a spin-off series, set in the Viking equivalent country, Skandia, about a bunch of boys who are the ones who are never chosen for sporting teams and have to make up their own "Brotherband", a group training in boot camp for their future as warriors. That’s okay, because they are led by a young genius, Hal, who keeps inventing things, including a ship, the Heron, that works better than the traditional Viking ships. In this world, the Vikings - Skandians - have stopped raiding because they do better being hired to protect the countries they used to raid, from pirates and other sea thugs. The female characters, both in this and the Ranger’s Apprentice series are all strong, intelligent and kick-ass.

There has long been talk of a Ranger's Apprentice film, but nothing has happened so far, alas!

You should be able to buy books by any of these writers either in ebook or print by visiting the usual sites - Amazon, Booktopia or Book Depository.
Posted by Sue Bursztynski at 6:08 PM

Glad you think so!

OMG Possum Magic sounds so cute! :D I want that.

I love the sound of Possum Magic - just the cover makes me go awwwww :D The Ranger's Apprentice books sound like a lot of fun too.
Tasha
Tasha's Thinkings - Movie Monsters

Both authors sound great thanks for sharing.
Will check them out.
https://moondustwriter.com/2018/04/06/fun-children-atozchallenge/

Great recommendetions all of them, but I'm espeically intrigued by the work of Jackie French. I dont' think I've ever heard of her but the stories you described sound really good.

Yes, she is a very good writer indeed!

I like your collection! will surely check out the books :)

I hope you find something you will enjoy! These are prolific writers, so there is bound to be something.