A To Z Blogging Challenge: S Is For Seven Little Australians 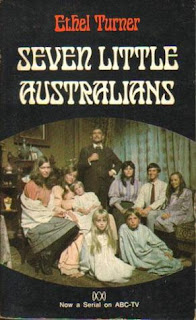 Want to know about an Australian children’s book that has been around for over a hundred years and never been out of print? Actually, a hundred and fourteen years. In 1994, it was the only Australian book continuously in print for a century. It’s Seven Little Australians by Ethel Turner. She wrote forty novels, including some sequels to Seven Little Australians and set up her own journal at the age of eighteen and wrote a children’s column for the newspapers, but this is the book that made her immortal. And she was only twenty-one when it was published, barely older than the young stepmother, Esther, in the novel, and had been writing and publishing since she was eighteen.  Her own family, before she left England at the age of six, was huge; her widowed mother married a much older man, who already had six children of his own. She had a baby, Rose, and there were nine children! When he died, Ethel’s mother took her own three children, Ethel and her two sisters, Lillian and Rose, and left for Australia, where she married again. Ethel was young when she came here, but she must have remembered what it was like to live with a big family like the one in Seven Little Australians. The original title, by the way, was Seven Pickles!

So, what is the book about? The middle-class Woolcot family live in Sydney, in a home called Misrule. Dad is an army captain, a stiff man who doesn’t understand his children or get on with them. His second wife, sweet Esther, is only twenty, with a baby of her own and six mischievous stepchildren to cope with all by herself, because her husband isn’t doing it.

The children are: Meg(16), who just wants romance and pretty things and can’t get them, Pip(14), who gets into mischief, Judy(13, real name Helen), the real heroine of the novel, who gets into trouble, both with Pip and all by herself, Nell(10), Bunty(6, real name John), Baby(4, real name Winifred) and Thomas, Esther’s child, who is known affectionately by his siblings as the General.

All the children have their own personalities and the novel begins with an introductory description of the Woolcot children, warning the reader that if they think they’re going to get a story in which the kids are little angels with maybe a bit of mischief, they are going to be disappointed. These are Australian children! Things are different in the Antipodes.

I think we all fell in love with the rebellious Judy. She got on the wrong side of her Dad, but was a good kid, really - and he deserved the cheekiness!

When Judy goes too far, as far as her father is concerned, he sends her off to boarding school in the BlueMountains outside Sydney, which she hates enough to run away. She comes home, after her long journey, very sick and finally her father relents. The children go on a visit to Esther’s parents out in the bush to help her recover, and we are taken into another world. Esther’s parents have a farm. They have been through bad times as well as good, and suffered from attack by bushrangers when Esther was very young. They have Indigenous Australians working for them, and here it gets interesting. The author treats them with respect - and there is a passage in the first edition of the book that, for some reason, was cut until 1994. Esther’s father is telling the children a story told him by Tettawonga, one of his Indigenous workers who saved Esther and her mother from the bushrangers. While he is about it, he comments wryly about this happening before Tettawonga’s people were colonised by European settlers. Certainly we have had a lot of racism in this country, but why did it take a hundred years to put this passage back in? It was certainly unusual for the time, and in those days there was nobody to sneer at "political correctness". In fact, why not read this post by a descendant of the author, talking about this scene?

I won’t tell you how it ends - spoilers! - but read it. If you want to give it to your children, it’s not too hard reading, though probably best for good readers. It doesn’t have the stiffness you expect from a lot of Victorian era books and you never forget this is happening in Australia.

It has been dramatised a number of times, though the only one I have seen was the television version with Leonard Teale, a well-loved Aussie actor, as Captain Woolcot.

If you want to see the original hand written manuscript, here it is, digitised by the State Library of NSW.  You can find this novel easily on line, including in Project Gutenberg. Go get it!
Posted by Sue Bursztynski at 2:10 AM

This sounds like an interesting book. I clicked through to the story and enjoyed it.
http://findingeliza.com/

It’s a classic! Glad you enjoyed the story!

Hi Sue - I've made a note of it ... and so will be back to read here and also to look at Project Gutenborg ... sounds very interesting - cheers Hilary

Naturally this is one I'm familiar with. Not a personal favourite, but I won't discuss so as to not give away spoilers. But I'm fascinated by it's claim to fame - I had no idea about it's publishing history!

Amazing, isn ‘t it? If Ethel Turner was still around she would be collecting a fortune in royalties!