A To Z Blogging Challenge P is for Park, Phommavanh and Pryor

Today, four fabulous Aussie children’s writers, two of them with the surname Pryor!

Ruth Park is not actually known as a children’s writer, but as the author of a lot of classic novels for adults, set in Sydney in the early twentieth century. However, there are some children’s books and two YA novels I’ve read with her name on them, both fantasy. My Sister Sif  involves two sisters living in Sydney, at boarding school. They aren’t quite human. They are sea people - pretty much mermaids, without the fish tails. It’s not as good as the next one I’m going to mention, but worth a read.

Playing Beatie Bow is a beautiful time-slip story you might enjoy if you like Kate Constable’s time-slip novels. It became a delightful film.

Abigail is a girl living in Sydney with her mother. She can’t understand why her mother might be willing to take back the father who left them. And then she time travels, via a piece of lace she finds in the sewing basket of her neighbours.

Her neighbours’ ancestors are a Scottish immigrant family living in the Rocks, a seaside area of Sydney that, nowadays, is populated by the well-off, but in the nineteenth century was very different, filled with all sorts of people, rich and poor alike. The Bows have a sweet shop. The father is a former soldier who has PTSD issues and needs constant looking after. Beatie Bow, whose name was used in a scary skipping rhyme, is the young daughter of the family who has herself been time travelling to modern Sydney. The grandmother has the Sight, and recognises Abigail as a prophesied one who will save a member of the family. And Abigail falls in love... When she returns to her own time, she has come to understand her mother better because of that.

Oliver Phommavanh is a Thai Australian writer and performer. He started life as a primary teacher, so is able to understand what children enjoy. In fact, in his novel Thai-Riffic! the young hero’s whacky, over-the-top teacher is very much the author. I saw him performing at the State Library once and couldn’t stop laughing.

Albert Leng is a Thai boy whose parents run the local Thai restaurant. He wants to eat Australian food, dammit, and be Aussie. Pizza, not Thai food. This multicultural business sucks! However, everyone else thinks  being Thai is cool, and loves his parents’ food. What’s a boy to do? There was a short story in Growing Up Asian In Australia in which the school orders Thai food from the restaurant for a school multicultural day and Albert makes sure it’s very hot and spicy in hopes that his friends will be put off. No such luck - everyone loved it!

There are other novels about Albert, and other children, all funny. Oliver Phommavanh's books all did very well in my school library. 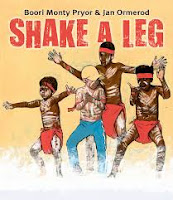 Boori Monty Pryor is an Indigenous Australian writer, the first Australian Children’s Laureate. He has one picture story book to his credit, Shake A Leg, (illustrated by Jan Ormerod)in which some boys get hungry on a hot summer night and go to a pizza parlour run by an Indigenous man who looks suspiciously like the author. The pizzas are unusual shapes, connected to Australian myths and legends. The shop owner tells them stories and there is a lot of dancing. A beautiful, joyous book! It won a well-deserved Prime Minister’s Literary Award.

His novels are co-written with Meme McDonald. They are My Girragundji, The Binna Binna Man, Njunjul The Sun, Flytrap, plus an autobiography, Maybe Tomorrow. I’ve read them all except for Flytrap, but that sounds like it might be enjoyable. The first three are different times in the life of a young Indigenous boy. As he grows up, the books change from children’s to YA. The first one is about a boy and his frog spirit. It is funny and charming. The Binna Binna Man has the family driving to a funeral. Sad as the funeral might be, the story is not without gentle humour - and the authors sneak themselves into the story as characters!

In Njunjul The Sun, Mr Pryor also appears as a character. The young hero is sent to stay with his wise and likeable uncle in Sydney after having a run-in with racist police. His family feel that he will heal from his stress with some time away. The uncle, like Boori Monty Pryor himself, makes his living through school visits and working with children to help them understand Indigenous culture better. He performs for them, with music and dance, and takes his nephew along, to heal... Even in this story there is gentle humour, as in all his books.

My final Aussie children’s writer for today is Michael Pryor. Michael is the author of around twenty-five speculative fiction novels for children and teens. The most recent one, which I’m reading now, is Gap Year In Ghost Town, set in Melbourne, where the author lives. So far, very funny! And that’s the thing about Michael Pryor - he’s funny! The last book of his I read was Machine Wars, a hilarious novel about a boy on the run from a web-based being that has become self-aware after some work by his vanished scientist mother. It reminded me of the Jon Pertwee Dr Who story “Terror Of The Autons”. In those days, the most common thing was plastic and there was a character who was swallowed up by an armchair! In this era, what’s the most common thing? The internet. Pretty much everything has internet connections, so our hero is pursued by everything from a photocopier to a pool cleaner. That one was a stand-alone book. Mostly, he writes series.

My favourite Michael Pryor series was the delightful YA steampunk “Laws of Magic”. These six novels are set in an alternative  universe Edwardian era, where you can study magic at school, there is a Sorcerer Royal and women may not have the vote yet, but they can be scientists, artists and many other things they had trouble doing in our world. The female characters in this series are all strong, including Aubrey’s mother and grandmother. The hero, Aubrey Fitzwilliam, and his two friends,  sensible George and kick-ass Caroline, are working hard to prevent the Great War(World War I) which is being set up by the villain so he can use the energy from all those deaths for his power. In one of the novels, our heroes are fighting dinosaurs in Paris! (Paris is Lutetia in this universe) Oh, and Aubrey, a brilliant magic practitioner, is dead. Technically, anyway. He played around with death magic before the first novel began, while at school, and as a result is having to literally hold body and soul together till the problem can be sorted out.

How can you resist a book that begins “Aubrey Fitzwilliam hated being dead. It made things much harder than they needed to be”?

Any P authors I have missed?

With four authors on this list I will leave you to look up where to buy their books. They are all available on Amazon, Booktopia and Book Depository on the authors' name pages - go check them out!
Posted by Sue Bursztynski at 3:49 AM

Hi Sue - two of these authors sound quite delightful ...what fun and yes I bet they teach about different cultures - I'd love to read them ... and will see if I can get them from the library ... Oliver and Monty - cheers Hilary

Oh my the last one sounds just up my alley and I am going to hunt for these books here in India. I love YA and fantasy and am always keen to discover another new author on this. :-)

Hi Hilary! Do let me know if you manage to get them and I hope you enjoy them.
Hi Shalini! You will love Michael Pryor, I promise!

Oh my gosh, Playing Beattie Bow! I haven't thought of that book for such a long time. I remember reading that when I was young and then seeing the movie on tv. I only vaguely remember it...the skipping and time travelling and that's about all. But I do remember I really enjoyed the book.

A terrific book, indeed! I discovered it as an adult. My school library was pretty small, the size of a classroom, so very little in it.