A To Z Blogging Challenge 2018: Z Is For Claire Zorn And Markus Zusak

For my final post in this series, I’d like to write a bit about Claire Zorn and Markus Zusak, two writers whose books have been shortlisted more than once by the Children’s Book Council of Australia. One of them has done very well within Australia, the other has been a huge success overseas as well and if you don’t live here, you probably don’t even know he’s an Aussie. You may have seen the Hollywood film based on one of his books. And I have to confess that I have only read one book by each of them, though I have gotten halfway through Claire Zorn’s award-winner One Would Think The Deep, which won last year’s CBCA Award, older readers category, with its story of surfing and mourning and the music of the 1990s... she’s only written three books anyway, so I have sort of read half of her works. 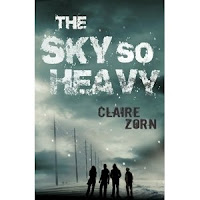 Let’s start with the Claire Zorn book I have read, though. It’s the only one of the three that is speculative fiction. The Sky So Heavy is set in the Blue Mountains outside of Sydney. One day Fin is going to school and thinking about ordinary things, like homework and the girl he likes, and hearing news about some nuclear test happening on the other side of the world, the next he’s waking up to a nuclear winter, left to look after his little brother and cope as best he can, because their parents are missing and things are going horribly wrong. The Internet is gone. Communications are gone. Food is going. It’s snowing. The residents of his town don’t even know if help is coming from outside.

What is important in this novel is how people treat each other when there’s a catastrophe and no way to know if it will ever be over. You get the feeling that this is how life will be from now on, but what can you do when you can’t even grow things? And are you going to get sick? Die?

It’s true science fiction, not in the “sense of wonder” style, but in the dystopian “what if...?” sense. What if suddenly all the things you took for granted were gone? How would you treat other people and how would they treat you, when there was a limited amount of resources?

I rather think it might all happen the way things go in this novel. It hasn’t been made into a film, Hollywood or otherwise, but I believe it would make a good one, or at least a TV mini-series. It was read by a few of our students, not many - I think that grey, depressing cover might have put kids off. A pity!

Her other book, One Would Think The Deep starts with the young hero’s mother’s funeral and his being sent to stay with relatives. Markus Zusak’s historical novel The Book Thief  also begins with a funeral, that of the heroine’s little brother and she, too, goes to stay with foster parents, but that’s where the similarities end.

The book thief of the title is Liesel, who lives under the Nazi regime. The first book she steals is at her brother’s funeral. It’s a gravedigger’s manual that has been left lying around in the cemetery. It’s the only book she has at the time and she can’t actually read yet. In her new home, she meets her kindly foster parents, Hans and Rosa - who, incidentally, are hiding a Jew, Max, from the Nazis in their basement. Liesel learns to read so that she can read her book. She also befriends the neighbour boy, Rudy. Together, they rescue books from a Hitler Youth book burning. Rudy is smart and athletic, but no Nazi, which is likely to get him into trouble some time.

She reads and shares the joy of reading and writing with Max in his basement. The rest I won’t tell you because of spoilers, but I loved it! And there is an Australian connection, but again, spoilers! (Actually, it's been a while since I saw the film, so I can't remember, but I see from a blurb about it that the small Aussie connection was removed, dammit!)

The unusual thing about this book is that it’s narrated, in first person, by Death. “Death as in the Grim Reaper?” asked a girl who was borrowing it from my library. Yes, I agreed, Death as in the Grim Reaper. He encounters Liesel at various times in her life and finds her fascinating. He tells her story compassionately and well. This is not a Death to fear. He’s just doing what he has to. (Can't help thinking of Terry Pratchett's Discworld Death)

I did start reading one of his other novels, The Messenger, which I picked up at a library conference, because the author looked about sixteen and I wanted to support a young emerging writer, but I never got around to finishing it. Don’t miss out on it because of me - the book has won plenty of awards, including the CBCA Award! I’ll probably get back into it at some stage; bestselling author as he is, Markus Zusak has only written a few books, five at this stage, so if I want more Zusak I’ll have to try his other work.

But The Book Thief, I suspect, will be his classic, the one for which he is remembered.  It's certainly the one which is mentioned when people speak of him. "Markus Zusak, author of The Book Thief".And the film, which starred Aussie actor Geoffrey Rush and Emily Watson as the kindly, decent Hans and Rosa, with music by John Williams, was fairly faithful to the novel and lovely to watch, both visually and as a story.

If you read nothing else among the books I’ve mentioned, do get a hold of this one!

If you want to buy these books at Booktopia, here's the link to Claire Zorn's page and Markus Zusak's page. Please note, Markus has a new book coming out in October, so you can pre-order on Booktopia.

If you'd rather buy from Book Depository or Amazon, just type in the author names. These guys are well and truly in print! Or you can buy them from iBooks.

And so, another A to Z Challenge has finished. I hope you have enjoyed reading my posts as much as I have enjoyed sharing the books and writers I love with you. Thank you to those who have stopped by to comment! Please do hang around for more, perhaps follow - I post regularly about books and writers, though not every day - more like twice a week. I’ll be posting my reflections in the next week. Look out for it!

Posted by Sue Bursztynski at 6:25 PM

Hi Sue - I've seen the Book Thief ... but not read the book. Well done on ending with two authors for the Z post ... well done - and I've loved reading them - a good reference ... thank you - cheers Hilary

Thanks, Hilary, glad you have enjoyed! I do recommend the book, but the film is also good.

Thank you for this month! I really enjoyed your recommendations, and put a bunch of new books on my TBR. Lovely theme!

Glad you enjoyed - and I loved all those very strange Hungarian folk-tales- thanks for sharing them!

I keep meaning to see The Book Thief - I heard good things about the film. I didn't actually know it was based on a book, thank you for enlightening me :). The Claire Zorn book you talked about sounds like something I would have loved to read when younger, but these days I just can't get into dystopian literature - maybe it hits too close to home now?
Great AtoZ - thanks for all the visits you made to my blog, I very much appreciate them.
Best wishes,
Tasha
Tasha's Thinkings - Movie Monsters

Hi Tasha! Probably a lot of people didn’t know it was a book first, but plenty did - I believe it has been on the NYT bestseller list. In fact, for a very long time. Well worth reading, but if you are strapped for time, the film is lovely too!

Being a teacher librarian means I read a lot of children’s and YA fiction and kids these days adore dystopia, eg The Hunger Games, so I, too, read a bit of it. On the other hand, I don’t think I will be re-reading The Handmaid’s Tale or 1984 any time soon! I prefer the ones written for kids, which usually manage to sneak in a few positive elements...

Thanks for dropping in and I enjoyed your posts on movie monsters very much. A fun theme!

I think 'The Book Thief' would've been such a story that my once young daughters would've loved reading. I watched the movie trailer and it's intriguing. I may look to see if it's available on Netflix or Amazon Prime to stream. Thanks for sharing!

Well, we did it, we finished the A2Z Challenge. I certainly appreciated you visiting and leaving comments when my blog let you. I know you experienced problems and I'm not sure why but I'm glad we connected on and off. So, a big WAY TO GO to you for a job well done this year. *applauds*

I'm playing catch up since I was away from Blogosphere over the weekend and then yesterday got interuptted with other things so I fear it's going to be another crazy day at my house. Take care and again, congratulation!

I think you should be able to get hold of the Book Thief movie easily enough. Enjoy!

I haven't seen the Book Thief because I want to read the book first, and it is languishing somewhere deep in my TBR pile. I will get there!

Up to you! The film is fairly faithful to the book, including in spirit. If you enjoy it, you may even dig the book out of your TBR pile! 😛

Thanks Se. I've been circling The Book Thief, wondering if I should give it a go, and now I have my answer. Cheers

Trust me, you’ll love it! And then see the film. A beautiful thing!