A to Z Blogging Challenge 2018: E Is For Hazel Edwards!

Some years ago, I was actually sitting with her at a signing table at a Melbourne bookshop. We were there with our publisher, Ford Street, at a shopping centre. The bookshop had invited us to make an afternoon of it. We all had to read to children and spend some time at the tables, signing.

Hazel very kindly advised me how to spend my time while waiting for people to come and get their copies of our books signed, don’t just sit there, keep busy but at the same time not so busy that people who want their books signed will go away. As the most prolific writer I knew, who did this all the time, she was worth listening to.

Her newest book at the time was a YA novel for Ford Street, which she was, after all, there to promote. It was F2M: The Boy Within, which she had written with a young trans man called Ryan Kennedy. I’ve reviewed it on this blog, here. F2M is a delightful story about a girl who knows she is really a boy and is researching ways to transition. The only real problem is how to tell, not just her family, but her all-girl punk rock band. It was not a victim story at all - and it told me as much about punk rock as it did about the trans community(two of the characters were a married couple where the husband had been a woman and the wife had been a man). So, yes, a lovely book. 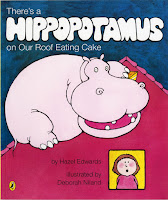 The thing is, she is hugely popular for a children’s picture book she wrote many years ago, There’s A Hippopotamus On Our Roof Eating Cake, illustrated by Deborah Niland. I got a copy signed for my great niece Dezzy, a fan, when she was little. Dezzy is now eighteen and working part time in a bookshop - and it was old then. Imagine having a book still in print and popular after thirty-eight years! The book is certainly a classic, which has even been turned into a musical and a short film, but Hazel was there to sign her newest book if she could.

Guess what one bookshop customer after another brought instead? Adults would come up with a smile and say, “I loved this when I was a child!” I don’t think they sold a single copy of F2M that day, but plenty of copies of Hippo, apart from well loved personal copies brought to the table.

Here is a link to a YouTube video of Hazel reading Hippo at a public library. Watch and enjoy!

Hazel Edwards has written so many books, mostly for younger children, that it is hard to keep up with them all - two hundred, according to her web site. There is a lot of fiction, but also non fiction. She once spent some time in Antarctica for research! Hazel Edwards is not too proud to take on any theme that might make a book of interest to young readers or adults - and the fact that she recognises you can turn pretty much anything into a book means she is one of a handful of Australian writers who can make a living out of it.

Hazel recognises that children want to see themselves in books. A recent one was Hijabi Girl, written with a Muslim teacher librarian. Despite her huge popularity she had to self publish that one, because publishers just couldn’t see that there would be a market for it. The last I heard, it was doing well. It’s interesting to note that even a writer who is pretty much a living national treasure might still be rejected by a publisher. In fact, I heard her speak at the Jewish Writers’ Festival, with Anna Ciddor, whose book The Family With Two Front Doors had also taken some time to find a publisher(“lovely book, but no market for it”) and is now being sold outside Australia and translated into Polish.

If you’re interested in learning more about this wonderful writer, here is her web site. It has videos, teacher notes and much more,

Here is an interview with her published on this blog a couple of years ago. I admit that she supplied the questions - Hazel Edwards certainly knows how to self promote!

And here is where you can buy her books, as well as in all good bookshops.

Posted by Sue Bursztynski at 4:50 PM

Hi Sue .. she sounds an amazing lady - no wonder you took her suggestion on board. Interesting to note the different books - the Hijabi Girl and the Jewish book .. both now relatively successful. Cheers Hilary

Hi Debbie! That’s F2M. You should be able to find it on line, hope you enjoy it as much as I did!
Hi Hilary! Yes, she is amazing. Go check out the YouTube video and her web site, both well worth a look.

Nostalgic; I used to have her picture books as a kid

A LOT of people had her picture books as kids! :)

A terrific book! You shouldn’t ha e much trouble buying it on line. Try the Ford Street Publishing site.

F2M sounds like a great book, and wow, you're right that is an amazing amount of time to have a book remain popular - Hippo is definitely a classic.
Tasha
Tasha's Thinkings - Movie Monsters

It’s nice to know that parents are able to share a book they loved when they were children - in a new copy!

Aww, Hijabi girl sounds really cute. After watching Breadwinner recently, I am super happy that different cultures are being accepted in fiction and the mainstream in general.

If you can get a copy, it’s worth the read. Very short, though, aimed at children. It’s a chapter book.

I enjoyed reading your post. Thank you so much for sharing :)

Thank you for visiting, Jui!