A To Z Blogging Challenge: X Is For Xylophones Over Zarundi 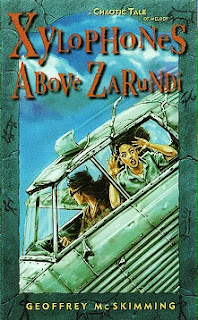 Xylophones Above Zarundi is a novel by Aussie children’s writer Geoffrey McSkimming, one of his Jocelyn Osgood stories, in the Cairo Jim series I mentioned in my M post. I chose it because it starts with X, but I will be talking about Jocelyn and her novels in general.

This book, which I read years ago and am currently enjoying in audiobook, is an adventure of Valkyrian Airways flight attendant Jocelyn Osgood, a “good friend” of Cairo Jim, and her not-too-bright, gum-chewing friend Joan Twilight, a fellow flight attendant. While they are in the African nation of Zarundi, enjoying the coronation of Princess Ariadne, a priceless royal tiara is stolen and Jocelyn and Joan find themselves on a quest to get it back. The  xylophones of the title are played by a trio of musicians, the Tropical Xylophonists, who have come to Zarundi to perform in the Royal Command Performance.

The Cairo Jim and Jocelyn Osgood adventures are unusual in that they are children’s books with adult protagonists. In the case of archaeologist Jim, he is a somewhat childlike adult - one who never even notices when a woman throws him strong hints that she would like to date him. One of them, a Turkish colleague, uses love song ringtones on her phone to hint, unsuccessfully. Jocelyn is the other woman in his life who fancies him, but to no avail. In Xylophones she is rather annoyed with Jim for a newspaper article that mentions he is hanging out with a female colleague on a dig going on in Upper Egypt.

Let’s talk about Jocelyn. Her stories are very much “Girls’ Own Adventures”. She is more mature and probably smarter than Jim. Her adventures are just a little less over-the-top than his, but if there was a female Indiana Jones it would be her.

Jocelyn works for Valkyrian Airways, as a flight attendant, but has a pilot’s licence. She keeps a pet axolotl called Zsa Zsa. Apparently she looks like Dorothy Lamour, as we discover in Cairo Jim On The Trail To Chacha Muchos. In that novel, she arrives to rescue Jim in a hot air balloon accompanied by a dance band who think she is Dorothy Lamour.

And that’s the thing - she does come to the rescue. She is a good strong character, with a brain. Jocelyn makes a good role model for young female readers. Making her a flight attendant gives the author the excuse to send her on adventures in various countries. 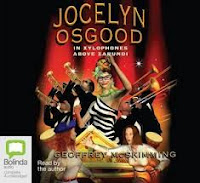 The characters in this one are what makes the story so deliciously over-the-top. The xylophonists are Americans, who quarrel over the craziest things and  dress like Carmen Miranda for their act(See the picture at left!). Two brothers who are performing are, of all things, whistlers. There is a child passenger who keeps asking for alcohol and, when refused, recites verses from “The Green Eye Of The Little Yellow God”, unnerving Joan Twilight. The captain of this flight is scared to meet the two flight attendants. The welcoming band who play when the Valkyrian plane arrives have been given the wrong music and are playing “My Heart Belongs To Daddy” instead of the national anthem. Everywhere the young women go, there are people selling whirligigs they claim will fix everything including leprosy!

Adventure and humour combine to make any Jocelyn Osgood novel a treat for young readers, not to mention old ones like me!

You may have trouble getting the books new, due to the original publisher being taken over and most stock dumped, but they are easily available in audiobook, all of which  are beautifully read by the author. Booktopia has them on CD, while you can download them on Amazon, some of them free to Prime subscribers or free with an Audible trial. I bought mine from iBooks. Its Bolinda Audio, which is always good.

If you really want them in print, try ABEbooks which has plenty of them secondhand.
Posted by Sue Bursztynski at 5:38 AM

Thanks, Hilary! I do have a choice for Z, Markus Zusak and Claire Zorn.