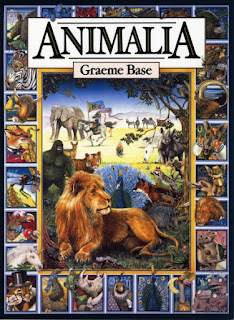 Graeme Base was born in England, but came to Australia as a child, so he counts as one of us! He started off in advertising. It didn’t take him long to change over to illustrating children’s books, then writing and illustrating his own.

His most famous book, Animalia, failed to win the Children’s Book Council Award when it came out in the 1980s. The book that did win, by the way, is forgotten by anyone who wasn’t around at the time, whereas Animalia has already celebrated its silver anniversary. It has won some child-voted awards, the YABBA and KOALA prizes, and there are some apps based on it. It says something about judged awards. It’s always exciting to win one, and I have done judging myself, but judges can get it wrong. I remember asking one of that year's judges, a friend of mine, why Animalia hadn’t won and was told it just didn’t meet the criteria. A bit odd considering it made the shortlist, in fact was the runner-up(Honour Book).

Animalia is an alphabet book with a difference. Each letter of the alphabet is a double page spread with alliteration. “Lazy Lions Lounging In The Local Library”, for example, shows one of Graeme Base’s magnificent paintings, in this case lions sitting around in a library, books in paws. Around them the reader has to pick up pictures of other words starting with L, eg lamp, lizard, leprechaun. A friend of mine who works at a private school which can afford these things told me that they got permission to put this one up as a mural at his library.

The D page, “Diabolical Dragons Daintily Devouring Delicious Delicacies”, is subtler. Outside you see the Doctor(Tom Baker) and a Dalek, but also in the background, a very small picture of someone looking up at a knife hanging above him on a thread. Dagger, but also, if you’re an adult reading it with your children, “Damocles.” The paintings are exquisite! Kids in my library used to spend whole lunchtimes browsing through it, admittedly mostly for the “where’s Wally?” style little boy who was meant to be the author. But kids don’t vote awards just for “Where’s Wally?” Graeme Base has written and drawn a lot more since then, all of it stunningly beautiful, a lot of them with messages. One of them, The Worst Band In The Universe, includes a CD of music written and performed by the author, who was in a band himself before becoming a writer-illustrator.

One of his early books was of Lewis Carroll’s Jabberwocky. There is more to it than just illustrating  the Carroll poem. His artwork comments. The last picture shows the Jabberwock’s head on the wall, along with other extinct animals. 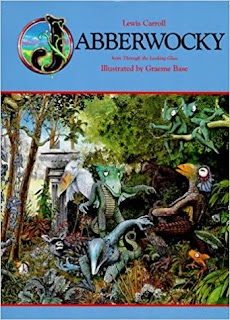 One year, I went to hear him at the Melbourne Writers’ Festival, with my brother and his artist wife. During the questions, my sister in law asked, “If you want to draw a hippo, do you do it from a photo or go to the zoo?”

The interviewer quipped, “He goes to Africa!”

Whether he does or doesn’t, his beautiful books appeal to children and adults alike.


Here is his web site.


And here are some places where you can buy his books, as well as your local bookshops

Hi Sue - strange but true ... this book was sitting on the side in the library last week and I idled my way through it ... thinking what a fascinating book to have - especially for kids (which I don't have) who enjoy a good puzzle ... Graeme and his wife have a great thing going here - such a creative spirit - cheers Hilary

Yes, the kids love it! Ah, the artist wife I was talking about was my brother’s. My sister in law is very good and she has passed her talent on to my nephew and niece.

Animalia sounds like a book that is tons of fun! Thanks for the recommendation! :)

Good post, I hadn't heard of Graeme before, one to look out for.
https://iainkellywriting.com/2018/04/02/b-is-for-birkirkara-malta/

Thanks, ATH and Iain! I am glad I was able to let you know about a writer/illustrator who is new to you.

I do think Base's illustrations are magnificent and remember enjoying Animalia with my children
Regards
Anne
fellow Australian A to Z-er
https://ayfamilyhistory.com/2018/04/02/b-is-for-beatrix/

They are beautiful, aren’t they?

Thanks for the introduction of Graeme Base. His work is the kind of artwork I would instantly be drawn to when looking for books for my children. I love the realistic drawings that captivate the imagination as his works do. "Animalia" is astonishing. Thanks for visiting yesterday's 'B' post and I hope you will join me throughout April for more iPad Art Sketches through the Alphabet. Happy A2Zing!

And it’s the kind of book your children would love! I will have to find my way to your posts, maybe save your web site to my desktop, as it’s getting hard to do it on the A to Z web site. I found your post by chance, scrolling down that list.