Just Been To See... Charlie Duke! 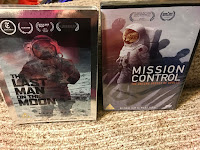 And here is a photo of the two DVDs I bought. The left-hand one, Last Man On The Moon, is the  film I missed out on buying when Gene Cernan(Apollo 17) was here. I did see it, with the same friend as tonight, but hadn’t bought it. The one on the right, Mission Control: The Unsung Heroes of Apollo, is the film that was shown tonight. I went with my friend Geoff, whom I know through Star Trek fandom, but who is also a passionate space program fan, who belongs to the Space Association. Geoff gave me the medallion below. It was made to celebrate the 40th anniversary of Apollo 16 and contains a bit of metal that went to the moon and back. This will go on my display shelves. 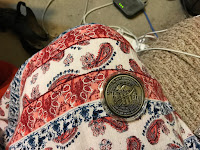 Charlie Duke went on Apollo 16, but before that he was capcom for Apollo 11. That meant he was a part of the crew on the ground, communicating with the ship as it flew to the moon. He was there tonight, along with Gerry Griffin - a flight director who saw it all, the film’s producer, the author of the book on which it was based - and Charlie Duke’s wife, who remembered seeing what a great time he was having, bouncing around up there.

We saw the film first. It was, as the title suggests, about the ground crew who worked brilliantly as a team during the Apollo program. Charlie Duke was one of them, while waiting for his own seat, as part of the backup crew. He says he was chattering away to the Apollo 11 astronauts as they were about to land and Deke Slayton, who was in charge at the time, elbowed I’m in the ribs and said, “Shut up, Charlie, and let them land!”

This film goes from the disastrous Apollo 1 to Apollo 13, the “successful disaster”. It shows, first, the old men who were there in the control room, where they had sat during those years, then interviews them all about their memories. It was a fascinating story - as interesting, in its way, as the Tory of the astronauts. These guys all had special skills and worked together as a team, without which those moon ships would never have gotten off the earth. And yet, the astronauts were the ones who got the ticker tape parades. The Apollo 13 ground crew were extraordinary. They really had to work together to come up with a solution to the problem, if those space travellers were going to survive. Gerry Griffin was there. He remembers being off shift when things started to go wrong, and coming in from a softball game to help work out the solution.

After the film was over, the guests came on stage to share memories and ask questions.  Charlie told a story of the capsule flying over Australia and being unable to communicate with Mission Control. They did hear from Australians, who offered to pass on their message to MC, then asked, “Is there anything else we can do for you?”

When the discussion was nearly over, we saw a film clip dedicated to Gene Cernan, who passed away last year(I did get to hear him when he was here).

I love anything about space flight. It’s so very much a part of the “sensawunda” I feel about science fiction! So please forgive me for talking something other than books.

However, I’m now in the mood to get back into Hidden Figures, which is on my iBooks shelves. Good night!
Posted by Sue Bursztynski at 4:08 PM

The film of Hidden Figures is wonderful! The book is lovely too, but it’s non fiction, in case you didn know, a bio of those African American women mathematicians who worked in the space program as “computers”. An amazing story.

Yes, I do have a passion for space. I wrote a children’s book about the space program and loved the xcuse for research. Thanks for the very kind offer of stamps - how about leaving it till your next letter and using them on the envdlope?

I hope you find the film! It does seem to be available on Amazon. Or you could ask your local shop to get it in.

I really enjoyed the movie, Hidden Figures. I got home from seeing it and immediately googled to find out the true story behind it. I hadn't realised the book was the non-fiction story so I will have to get my hands on a copy.

It’s a good book. The author says she was brought up in the area as part of a middle class professional African American family and they hung around with other AA professionals so she assumed that this was typical. You won’t get that from the movie, amazing as it is.