This was called the Melbourne Jewish Writers' Festival the last time I went. It was at Beth Weizmann, the Jewish community centre. This time, it was enlarged to the St Kilda Town Hall.

I ended up only going to two sessions, but I enjoyed them both. The first one was an interview with Dror Mishani, an Israeli crime writer, author of the Inspector Avraham books. I'd never heard of him, or of Israeli crime fiction, but I love crime fiction, so I went.  And he was fascinating and entertaining to listen to!


There is a good reason why I hadn't heard of Israeli crime fiction. There isn't very much of it, he explained. He recalled attending what was supposed to be a session with the six top crime writers in the country. He was very excited, dressed up for the flashy event... and there was an audience of three! Ah, Dror, old mate, I know how you felt. Been there, done that. Not often, but I have. The worst was at one of the Continuum conventions, when the three of us got ONE audience member! As the panel was meant to be about YA fiction and the young man was a teenager, we made a huge fuss of him and simple sat at a table to chat with him. And then there was the pretty much as awful panel at SheKilda 2. I was doing a panel on children's crime books with Susan Green, Goldie Alexander and Catherine Jinks. Susan and Goldie are old veterans and Catherine Jinks is a lot more famous than any of us. But guess what? We were in a tiny room downstairs. Nearly everyone was upstairs attending a packed session on YA fiction! We had an audience of five. We looked after our wonderful tiny audience anyway. Catherine Jinks was not at all pleased, though, you could see it. I don't blame her, I guess. She was probably wondering what she was doing there instead of upstairs with her fellow big names.She did hold out for most of the session, then asked if we could finish early.

Dror told it as a funny story, and went on. There is very little crime fiction in Israel because it's considered tacky, not literary enough. The first Israeli crime fiction was written in about 1930, about a character called "the Sherlock Holmes of the Middle East". People complained that there were more important things to write about and that crime fiction was just not literature. These days, the more important stuff is politics and the Middle East situation. When Dror submitted the manuscript of his first novel, The Missing File, to an agent, the agent said he couldn't sell it overseas unless Dror stuck in a few Palestinians. He didn't. That wasn't what the novel was about. It was a story set in Tel Aviv suburb Holon, where the author grew up, about a kidnapping and the police inspector who was investigating.

As it happens, the book has been translated into about fifteen languages and received a literary award(so much for the "crime is not literary enough"!). There is a TV series about to come out in Israel, but also a French version, which changes the setting to Paris, already out. (He hated it, by the way, though he didn't say why - he admitted he had been sent the outline and had some idea what they had in mind). I bought a copy as soon as I arrived at the festival, the only book I bought, and downloaded the second book.

If there is almost no native crime fiction in Israel, there is even less SF and fantasy, apparently. From what he said, the reasons are similar, but you'd think there would be a fandom. I am pretty sure there is some translated spec fic. In fact, I remember passing a shop in Israel which had a science fiction magazine in Hebrew, and there was, in big bold letters, the Hebrew translation of Harlan Ellison's "Jeffty is Five". Someone must be reading it. And my friend Alex Isle told me, years ago, he had a young pen pal in Israel who was a Star Trek/Klingon fan. I knew before I was told that he must be young, because once you're in the army, you couldn't possibly take those fictional warriors seriously any more! And yes, he was sixteen, and a computer nerd.

In the afternoon, I went to hear Dror and two Australian writers interviewed by Carmel Shute of Sisters In Crime.  Here they are. You can just see Carmel's arm - sorry! The theme was "Jewish Noir" but most of it was very general. 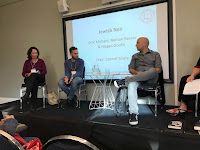 Nathan Besser(Sydney) and Megan Goldin(Melbourne) spoke about their books. His was, Carmel assured me later, very noir. And it was at least set in Australia. Megan's book was set in the US, a Wall Street story which starts with a lift(US word, elevator) from which blood is seeping! It sounded good, though I got the impression that the entire novel takes place in that elevator! (Maybe flashbacks?) I hope not.  Why set it in the US, Carmel asked. Megan said she had been travelling a lot, to many different countries, with her parents in her youth and actually spent her teens in the US. It felt right for that particular story. She had actually visited and read many forums for financial people, saw what it was that stressed them, what ideas they shared for impressing the boss and looking fresh when they were exhausted. She was no expert of the financial field, but had been complimented on her book by financial folk, so it must have worked.

There was some discussion of ending a book without any real resolution. Megan said that she had had good responses from those who read it as literature and poor responses from those who read it as crime fiction. I should hope so! It was really a discussion about why people read this stuff. I read it because I like to try solving a puzzle and because - this is what most crime readers think of - unlike in real life, there is resolution by the end of the novel. The crime is solved, the baddie gets what's coming to him or her and you have the fun of seeing if you got it right. I will never read again any crime writer who keeps you guessing at the end! (One reason why I didn't care for Kerry Greenwood's Dead Man's Chest, though I love her other novels; if it had been her first book instead of one of the later ones, I might not have read any more - just as well it wasn't!)

Dror said that he did give you two options in one of his books. He also said he had had letters from people who had "worked out" who had committed a crime that was only the background for his third novel and gave detailed explanations for why. He said that was amazing, because he didn't know himself!

It was an enjoyable day on the whole. A pity they only do this every two years. I hope the Melbourne Writers' Festival later this year has some equally entertaining panels!

Posted by Sue Bursztynski at 9:20 PM

Hi Sue - interesting ... and you've summarised it well. We can always learn something can't we - I don't know enough about Israel ... but can possibly see the challenges ... cheers Hilary

Hi Hilary! I hope there will be some more Israeli crime fiction. I’m enjoying The Missing File, which is just that bit different from other crime books I’ve read. But it’s hard to magine an Israeli cozy, say, with a little old lady running a tea shop in Dizengoff Street and solving murders...