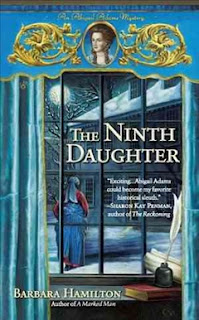 I borrowed this book from the library, in desperate need of a historical whodunnit. I’ve been reading new books and rereading old ones in the Benjamin January series by the wonderful Barbara Hambly, who does historical fiction, historical crime fiction, fantasy and horror fiction. It’s all good stuff, as far as I’m concerned, but lately I’ve been concentrating on the two series she has been continuing - Benjamin January and the James Asher Chronicles, which started with Immortal Blood(Those Who Hunt The Night in the US) and has gone for several volumes, about James and Lydia Asher, who have scary adventures in the Edwardian era with a sixteenth century Spanish vampire, Don Simon Ysidro, who is a kind of friend, though they feel guilty about hanging out with him because he is, after all, a killer many times over(and helps them because he is in love with Lydia). I admire this author for managing to keep up the quality of her books in both series. I have yet to be disappointed

The thing is, I’ve read the lot and for some reason, the early Benjamin January books are missing from my library. They were there before! So I browsed through the HAMs and found this book right next to HAM for Hambly. Oh, well, I thought, a historical whodunnit, might as well give it a try.

So I borrowed it and took it home. And looking it up, I discovered, to my delight, that Barbara Hamilton is a pen name for Barbara Hambly. I knew I was going to enjoy it - and I did.

There are a lot of historical whodunnits with real people as the protagonists. I’ve read two in which  Elizabeth I was the sleuth. One of them was even about the Amy Robsart matter, in which the wife of the Queen’s favourite, Robert Dudley, fell - or was pushed - down stairs. We still don’t know what actually  happened, but this was a murder mystery novel, after all, so in it she was murdered. There was a series about Shakespeare and a fictional partner who solved mysteries. There is even a series in which the heroine is crime novelist Josephine Tey.

This one is about Abigail Adams, wife of future President John Adams, who has to find a friend, Rebecca, who has disappeared after a murder in her home because the suspicion has fallen on her husband, John, and John Adams has posted a bond not to leave town till the matter is sorted. It’s set in the two weeks or so leading up to the Boston Tea Party.

The quality is as good as the January books and certainly better than other books of the kind I’ve read. Famous historical figures are brought to life. I’d only ever come across the Adamses in the musical 1776, in which John was grumpy and had no patience with idiocy and Abigail was his strong partner. In this book, the first thing we learn about John Adams - then a lawyer - is that he is likely to be furious at the shuffling around of potential evidence at a crime scene. That, of course, is what his cousin Sam and some other Sons of Liberty do rather than take a chance on having the British ask questions. There is also a missing book with codes and names in it, because the missing Rebecca was involved with their movement.

This Abigail Adams is intelligent, compassionate and quick-witted. She is also a housewife with a huge number of daily chores to do, chores we no longer have to think about. She does have a single servant(not slave - John Adams was one of only a few early US Presidents not to have slaves), Pattie, to help but it’s still a lot of work.

The British soldiers are by no means the villains of this piece; Abigail suspects, early on, that the murderer is almost certainly a member of the Sons of Liberty, led by her husband’s cousin. Redcoat Lieutenant Coldstone has seen far too many dreadful killings in London when victims not regarded as important never had justice - and he believes firmly that such a killer will keep doing it. He and his likeable Irish sidekick, Sergeant Muldoon, help her investigate the crime. Everyone knows who is involved with the Sons of Liberty, but that alone isn’t enough to get anyone arrested, even when Sam Adams arranges mobs or the locals encourage children to pelt soldiers with dung.

The era comes to life as well as the characters. Apart from Abigail’s housework there is the entire political and religious background. Abigail, who would much rather be drinking tea, is drinking coffee because everyone is boycotting the taxed beverage. At one point, someone points out to her that even with the tax, the colonists are still paying less than the folk back home in England. Not the point, of course, but still...

There are some nice touches of humour, such as the “Indians”about to throw that tea off the ships, who have agreed not to speak English, and say nothing but “Ugh!” even though they’re perfectly recognisable.

The characters were more well rounded than in other historical whodunnits with real protagonists that I have read.

A pity there are only three in this series and my library only has this one! And not in ebook, either, dammit!

Still, well worth a read. Recommended.
Posted by Sue Bursztynski at 5:48 PM