An Evening With Patrick Ness And Jesse Andrews 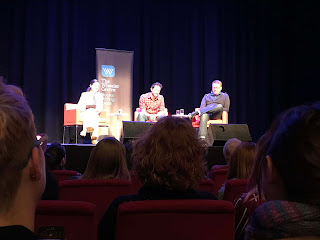 I made a booking for this Wheeler Centre session a couple of days ago. I’ve only read one book by Patrick Ness(The Rest Of Us Just Live Here, which was on the bookstall but not mentioned during the panel)  and nothing at all by Jesse Andrews, though I have heard of his work. However, if I think something sounds good, I’ll buy it, usually by download on iBooks, sometimes in print. That tends to be the way of things at Reading Matters and the Melbourne Writers Festival.

And you know what? I’m very glad I went! The gentlemen, who were being interviewed by fantasy novelist C.J Pacat(aka Cat), were funny and laid-back and had us all roaring with laughter. They started with general how-did-you-start-writing questions, and Patrick Ness, who has won a heap of awards, including two Carnegie medals for children’s writing, said modestly that he had started but not really thought anyone would want his books. Jesse Andrews said he had started from the other end, with “I am a genius and you guys should buy my books!” and then spent the next six years working on two novels which were awful.

Both of them have taken to screenplay writing. Patrick’s book A Monster Calls, is also about to open in London at the Old Vic as a play, but he didn’t write that. He said that he couldn’t wait to see it. He added that adapting a novel into another format didn’t cancel out the novel. The novel is still there.

He told a very funny story about how actors always want to expand on their roles.

Jesse, who is best known for his novel Me and Earl And The Dying Girl, has recently published a new novel(Allen and Unwin) called Munmun, which I’m fairly sure I have read about on some blog or other. It’s a satirical YA fantasy about a world sort of like ours, but not quite,  in which your height depends on how rich you are. The poorest people are about the size of rats, while multimillionaires are the height of skyscrapers. I ended up buying a copy after the session, because the impression I got was that the long queue was mainly for Patrick, with hardly anyone going to get anything signed by Jesse. When I went to buy a copy of his book, one of the Wheeler Centre folk told me I could go right away to get my book signed. I’ve started reading and it’s fun so far. I have a sneaking suspicion that it has elements of Jonathan Swift, who is quoted at the start of the book.

When they went to questions from the audience, there was a young man who said his English class was studying A Monster Calls and “We were wondering if the monster was real...”

Patrick said, shrewdly,”Is it a case of ‘We were wondering...’ or, ‘I have this essay for English’?” So he gave a couple of hints in the form of evidence, for the kid to think about, but said,reasonably, that he really couldn’t do the boy’s homework for him.

I chuckled, but felt sympathy for both of them. The kid was stuck with studying the damn novel and had hoped to get something from the horse’s mouth, the author was stuck with a question he no doubt gets often and was probably wishing schools would not make students read his books for work when they should be for pleasure. He was as polite as he could be under the circumstances, but he really couldn’t give the lad what he wanted.

I met my friend Kevin Lee, whom I have known for years through the Centre for Youth Literature, and briefly encountered Jeann from the Happy Indulgence book blog, who had come down from Brisbane for this session because she couldn’t get to the Sydney Writers Festival. Kevin had books to get signed for someone else. I stood with him in the signing queue, where we met another friend of his, a young lady who also has a book blog. We talked YA and waited for about an hour. The event had been on at the Athenaeum Theatre on Collins St and, I kid you not, the line went down the street, past the Town Hall, almost to Swanston St! After we’d been there some time, I became aware that the line for Jesse was much shorter than the one for Patrick and decided to buy his book and get it signed,  Heaven knows where I’m going to put it...
Ah, well a great night!
Posted by Sue Bursztynski at 4:47 PM

Munmun sounds like it has the makings of great social satire! You'll have to let us know what you think after you finish.

I enjoyed The Rest Of Us Just Live Here. Even without superpowers people have issues to deal with, and with superpowers there are still life decisions to be made.

Coincidentally I heard the author of Munmun (I didn't actually catch the title at the time but recognised it from your description. It sounds as if he has something to say.

Yes, The Rest Of Us Just Live Here was wonderful! But it’s not his best known book. I read about Munmun somewhere but can’t recall where. I follow a lot of book blogs, especially YA themed ones. I’m reading it now and going, “Ouch!”