A To Z Blogging Challenge 2018: K Is For Robin Klein and Ambelin Kwaymullina

Many years ago, I was chatting with a CBCA judge. This was a very long time ago, and I still don’t know if she was telling me real CBCA judging policy of the time or whether it was just that group; judges change every couple of years, though I believe you can reapply a couple of years later. This one certainly seems to have been a judge quite a lot. I’d like to think she was kidding me, but from what I remember of this lady, she wasn’t.

I had noticed that funny books never seem to win CBCA awards.(Remember what I said about Andy Griffiths and Paul Jennings?) Why was this? I asked. My friend the CBCA judge explained that it was because there was no “psychological depth” in funny books. After I’d got over the weirdness of that, I said, “But what about Hating Alison Ashley?” She replied that they couldn’t consider that because it was only available in paperback!

That novel was written by Robin Klein, who was known for her funny books. It became a film, which was filmed at my school, with Delta Goodrem in the title role(which is not the lead role). I was an extra and had a very enjoyable day, sitting in the sun with the coffee, lunch and nibbles supplied and occasionally wandering out to join a crowd of other staff and students crossing the volleyball court, for which they paid me $285... I won’t go into detail here, because I’m planning a post about the novel in Y - Y is for Erica Yurken. Erica is the point of view character, the one who hates Alison Ashley, while envying her - a delightful book!

She could also write serious and when she wrote a serious novel, Came Back To Show You I Could Fly, about the friendship between a child and a young pregnant drug addict, it did win the CBCA Award, plus others. I believe it became a film, Say A Little Prayer, but I haven’t seen it. Robin Klein’s fiction is quite often about friendships between very different people. Hating Alison Ashley. Came Back. Boss Of The Pool, a chapter book about a friendship between a teenage girl and a young boy with a disability who is scared of the water. It became a play.

Sometimes it’s about family. In one case, Halfway Across The Galaxy And Turn Left, it’s about a family from another planet! That too was filmed, as a TV series.

In case you still thought she could only write funny, People Might Hear You was set inside a cult.

She wrote quirky poems about life, the universe and everything, collected in books such as Snakes And Ladders.

Her picture book Thing was about a child who lives in a block of flats with a no pets policy, so adopts a “pet rock.” The rock turns out to be a dinosaur egg, which hatches into a stegosaurus. The family keeps having to hide Thing from the landlord and others who might want to remove him. 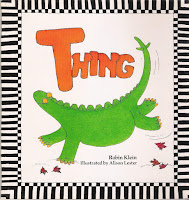 Unfortunately, Robin Klein suffered an aneurysm rupture some years ago. She can no longer write - but she has had quite a career. I’m giving you a link to this Wikipedia article, which has a long list of her books as well as a bio.

A mild brag: in 1983, she and I shared a Mary Grant Bruce Award for children’s short fiction. Hey, someone thought my writing was as good as hers! That was when I first knew, for sure, that I was a children’s writer.

I’ll be brief about Ambelin Kwaymullina, as I have done an interview with her here, plus reviewed her work. Ambelin Kwaymullina is an indigenous writer, who has done both YA fiction and children’s picture books. Her YA novels, the Tribe trilogy, are set in a dystopian future when, although the environmental problems of the world have all been fixed and people are treating the Earth with respect, you can be hauled away to a concentration camp for having unusual powers. A group of kids who do have various powers escape into the wilderness where they become a “tribe”. There are references to the treatment of Indigenous Australians in the past and the villain is named for a particularly nasty “Protector of Aborigines”. There are also references to Indigenous mythology. A wonderful series, highly recommended for you or your teenager!

I admire her not only for her writing, but because she has done all this with a full time day job. A full time teaching(university)day job! And does handcraft as well. And is involved with the Stella Awards...

She doesn't really have a web site, apart from a single pretty page with a detailed explanation of how Aboriginal art works, so I will just link you to where you can get her books.

Posted by Sue Bursztynski at 6:35 PM

This author is now in my read list. Thanks for sharing

I haven't read her books, but of course have heard of the film. I also have a vague recollection of the tv series, but I haven't seen either. They do sound more like books girls might enjoy then boys, so not sure my Barbarians would be interested. Would you agree?

And congrats on receiving a Mary Grant Bruce award (another author I loved as a kid).

Oh, I don’t know. The main character in Came Back To Show You I Could Fly is a boy. And your young Barbarians sound like solemn lads! But you know them better than I do. If there’s anything here that YOU would like to read, why not just read it? Hating Alison Ashley is a classic - but be warned, the film ups the ages of the characters. The novel is set in a primary school.

Thanks, Dee-Dee, hope you enjoy!

Heh, because if I add to my TBR pile The Hub will not be happy (I would have to read a book a day for the next year to rid myself of the TBR). My TBR bookshelves are full and I have piles on the floor *blush*.

The Barbarians aren't solemn, just prefer mystery/adventure/fantasy/comedy. Heckle is reading Book 1 of Kate Collin's Flower Shop Mysteries (from my bookshelf) and Book 3 of Chris Colfer's Land of Stories series (A Grimm Warning) while Jeckle is reading Book 2 of Dominic Barker's Blart series (The Boy Who Was Wanted Dead or Alive - or Both) and Enid Blyton's Famous Five collection 3. They always have multiple books on the go.

Sounds like your boys are enjoying their reading! I was reading Enid Blyton when I was in primary school too. Famous Five and Five Findouters which I admit I preferred, much funnier. I loathed Julian. Tomorrow I will be writing about Margo Lanagan, but also, Dave Luckett, whenever might interest them.

They wouldn't consider books only available in paperback? What an odd restriction. Thanks for the book suggestions!

The Ambelin Kwaymullina cover you chose is very striking and I have to say that the synopsis of the storyline you mention draws me. I'm going to look out for that one (for myself) straight away.

As for the comment by that judge - how bizarre. I do hope it was only a personal view and not a judging principle.

Hi Sue - I was particularly struck by Ambellin and so thank you for the website - could be useful when I look at indigenous art here ... it'll be a cursory look - as I'm no specialist ...
http://ambelin-kwaymullina.com.au/

But so good to see Ambelin - cheers Hilary

Emily, yes, very strange! This lady would have trouble nowadays. I can’t think of a YA book that doesn’t go straight to paperback.
Debs, a wonderful cover and ahat’s Inside is even better! Hope you enjoy it as much as I did.
Hilary, sorry, I should have put in that link myself. I actually sent a copy to a friend who teaches art and does Indigenous Australian art with her Year 7 kids.