#AtoZ Challenge: X is for Xanth, Xenocide and Xena

Today’s letter is X. There are plenty of books with X in the title, but I haven’t read most of them, so I’ll keep this short, stick to stories I have read, and mix it up.

X is for Xanth, the very silly universe of light fantasy novelist Piers Anthony. I’ve only read a few of these books, but it’s still going after many years. I’ll give you a link to the Wikipedia page, which lists the lot.

It’s full of puns - even the world’s name is resemble the name Piers Anthony. Xanth! Get it? The country is one where you have to show some signs of magical ability or off you go to Mundania. If you are a fannish type you will recognise the term as connected to “mundane”, not just a word for ordinary, everyday, but for non-fans, as Muggle in Harry Potter. 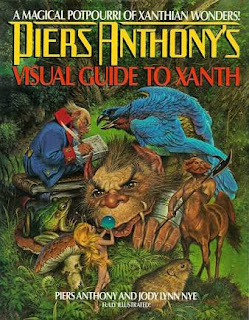 The puns and jokes are an integral part of the stories. One pun I liked when I read this years ago was the shoe tree. Here in Mundania a shoe tree is something you stick your shoes on when not wearing them to keep them in good condition. In Xanth, it’s an actual tree whose fruit grows into shoes, which you can pick, clean out and wear.

There are many creatures from our fantastical bestiaries, centaurs among them, and they aren’t, thank goodness, the kind you find in Harry Potter, who have no interest in what’s going on outside their tribes and even banish one of their kind for being too friendly with wizards.

The books are available on line, both in print and ebook, great for a light read. 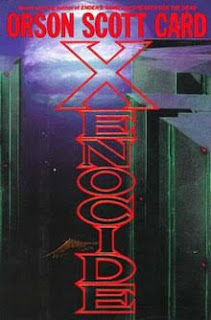 Xenocide is the killing of non humans, which happens in Ender’s Game by Orson Scott Card, far less cheerful than the Xanth series. The first book is military SF, but with a difference. The boys at Battle School are fighting the aliens from their computers. Spoiler, but not really, is that they think they are doing simulations. Not too much of a spoiler, because I figured it out very early in Ender’s Game, and I’m sure you will too. I read the original trilogy soon after the books came out, though there has been more since then. There was a film of it, which I haven’t seen. The hero, a young boy called Ender Wiggins, is horrified to learn what he has done - and the whole war was a mistake anyway - so he takes the final egg of the Hive Queen(the enemy were an insectoid race)and goes looking for a planet where her people can settle. He becomes a Speaker For The Dead, someone who is asked to speak at funerals, but also, in his case, he speaks for the race which has almost been wiped out.

The author’s political and social views are controversial, but there is no doubt that the Ender books are powerful writing.

These books are easily available on line.

So, who enjoyed Xena, Warrior Princess? I confess I have only seen the earlier seasons, but they were a lot of fun. I sort of lost interest when they started to get more serious, but the earlier episodes were hilarious.

Xena, played by Kiwi actress Lucy Lawless with an American accent, was a warrior woman who first appeared in the sister series, Hercules: The Legendary Journeys, as a villain! Then she got her own show and wandered a world of Greek mythology that looked suspiciously like New Zealand, with her faithful companion Gabrielle, doing good and encountering gods and monsters and whatnot, and eventually falling in love. They were considered gay icons before that happened and the actresses came here to Australia for Sydney’s Gay and Lesbian Mardi Gras, gowned up and waving at their gay fans.

I have another admission to make: well before Xena appeared on the scene, I wrote three stories about a warrior woman called... Xanthia. My stories were having fun with the swords and sorcery genre, set in my own world. Two of them were published in a small magazine called Eye Of Newt, long gone, alas! I did commission a Xanthia painting from a local fantasy artist, Esther Mace, who had illustrated the published stories. It hangs in my lounge room, over the sofa, a treasured possession. I can’t share it without the artist’s permission and I haven’t a clue where she is now.

I haven’t been able to do anything else with these stories since Xena showed up. Female fighters are common in fantasy, but I can’t see anyone taking these now. I have re-used the universe, though.

So... have you got any favourite fantastical beings or worlds starting with X?

Posted by Sue Bursztynski at 11:22 PM

Hi Sue - great list of X choices ... I haven't read any of them ... but Piers Anthony's series intrigues me and I must see if I can get one out of the library ... Oh how interesting to read you've written some short stories along these lines too; fabulous to have the original cover art - and can quite see why you won't part with it - cheers Hilary

Thanks, Hilary! I do hope you will enjoy the Anthony books. The first is called A Spell For Chameleon.

i loved +xena but even more Gabrielle at least the beginning, i lost all interest when it became darker (with them having babies to be killed etc etc)

I think we agree on this, miki! I loved the early funny episodes. Later... I stopped watching.

I love punning, so Xanth was right up my alley. I liked them, but wasn't in love with them. The Discworld series was more to my liking.

I LOVE the entirety of the Ender books and have read every single one of them, including all the Shadow extension. In the case of political/religious/horrid things some creators have done or expressed, it'd be a real challenge to watch or read (or view art) due to the creator's thoughts and deeds. It's a hard decision: love the art but hate the creator of that art?

And third love: Xena, Warrior Princess. Pretty much watched every episode up to the end (same with Hercules). My two kids and I would hunker down and enjoy them together. Early evenings on Saturdays.

I read the first few Xanth books a long time ago. I cannot believe that the series is still going. I would love to talk to a reader who has actually been consistently reading the books as they came out.

I never read Ordan Scott Card. His books seemed too militaristic for me. I also really disliked what I believed to be his social views. These days I have been on a kind of a kick where I read all kinds of things I disagree with so I would in theory be more open to reading him.

It sounds like your.Xanthia stories were innovative and way ahead of thier time.

Hi Stuart! I agree, Discworld was far more to my taste too. My sister is the main Xanth fan in my family.

How wonderful that you got through both series! I think I preferred Hercules, which had a bit more over the top humour, and those end credits that informed us that no dragons/skeletons/gorgons or whatever were harmed in the making of this production. And there was one episode that had a tribute to Ray Harryhausen’s brilliant scene with the skeletons in Jason And The Argonauts. But there were some great episodes of Xena too - and so many of those Kiwi actors went on to do well in Hollywood!

Alas, people who are amazingly gifted aren’t always nice people. In fact, there are quite a few artists through history whom you really wouldn’t want to have as your next door neighbour or your family member. I will tell you this about Card, though - I once met a New Zealand couple at a convention here in Oz who had fled their own national convention to get away from him!

I do have some Ender stories on my shelves that I haven’t yet got around to reading.

I used to watch Xena with my grandma, we both loved the early seasons of the show :)
Xanth sounds like a fun place!

Hi, Brian! A LOT of people con’t like Orson Scott Card’s social views! But the Ender books are classics and if you don’t want to spend money on something he has written, your local library may have copies,

Or you might enjoy his novel Enchantment, in which a young PhD student visiting the Ukraine finds Sleeping Beauty in the forest and wakes her and ... well, it’s great fun! The notion of Baba Yaga following them to the US in a plane and loving this flying stuff made me literally laugh out loud.

Although Iread some Piers Anthony stories, my visit to Xanth got diverted. When Xena, Warrior Princess came along - and Hercules - I was hooked and watched many of the episodes. I read that there is a new series in the pipeline that will make the gay relationship more obvious.