If you haven’t read any of the works of the late Sir Terry Pratchett, you have been seriously missing out. His Discworld novels, for which he is best known, are not merely fantasy, they are about the world we know, they send up everything from Hollywood to opera, Shakespeare to the vampire novels of Ann Rice.

Discworld is flat and rides on the backs of four giant elephants, which are on the back of an even bigger turtle, as in Asian mythology. It contains countries that are the equivalents of countries on our world, but the main venue for the novels is the city of Ankh-Morpork. This city has been invaded in the past, but sent off the invaders with much lighter purses and wondering why they have been persuaded to buy so much junk. When anything dramatic happens, they sell hot dogs and souvenirs in the streets, because it’s regarded as steeet theatre.

But they are more than just funny books. If that was all they were, well, there are plenty of funny books out there, some of them excellent. These are about people - ordinary people. If your idea of fantasy is a quest by a wizard, a dwarf, a couple of elves and a long lost prince, to find a magical object before the villain does, you will be disappointed. Pratchett’s wizards are lazy,  interested in nothing but having huge meals and avoiding their students. His dwarfs all have beards, even the women(and by the way, this was Tolkien’s idea - he actually said in one of his essays that dwarf women have beards!) and have only one word in their songs: “Gold!” and a lot of uses for their bread, except actually eating it. One long lost prince in the series refused the throne of his tiny kingdom to keep his career as an actor. Another ignored the fact that he was the rightful heir to the throne because he felt he was doing a good enough job as a policeman, and that the city was doing fine without a king. As for the elves, the less said the better - they are evil and insane! And accurate, by the way - Pratchett knew his folklore, and the fairies and elves of European folklore were indeed scary.

So, most of his characters are ordinary men and women. They fight with the neighbours and have family feuds going on. They run small businesses. They are shopkeepers and farmers - not the kind who turn out to be Chosen Ones either, just shopkeepers and farmers. Some of them even do Morris Dancing or historical re-enactment.

Witches are the local village wise women, there to do medical stuff and use “headology” to persuade their patients that the sugar water they have been given has healed them. They do ride broomsticks, usually built by dwarfs, which often don’t work properly. The witches really don’t like working together, but do enjoy having an annual event called the Witch Trials, as in sheepdog trials.

There are a number of standalone novels, which are used to have fun with a specific thing from our world. Newspapers are the subject of The Truth. Pyramids is about the kingdom of Djelibeybi (pronounced “Jelly baby”, of course!), the Discworld answer to ancient Egypt. There are some hilarious happenings when the mummies revive and thousands of gods are walking the streets. In Moving Pictures the Discworld folk discover how to make films and nearly bring through Lovecraftian creatures from the Dungeon Dimensions.

There are also story arcs, with characters who grow and develop in the course of their series. My favourite story arc is the City Watch series, whose heroes are the police force, led by Sam Vimes, who is passionate about social justice, even while he declares he hates everyone.

The three witches, Granny Weatherwax, Nanny Ogg and Magrat Garlick, start in Wyrd Sisters, a novel celebrating and sending up a certain Shakespeare play. They continue on through several more, though hippyish  Magrat marries the king and is replaced as the third witch by Agnes Nitt, a girl with a powerful singing voice who has run off to join the Ankh-Morpork opera company(Maskerade), giving the author the chance to send up not only Phantom Of The Opera but specifically the rock opera of that.

There is also the Death series, beginning with Mort and continuing with the adventures of Death’s granddaughter Susan.

Even Death is a lovable character in these novels.

Look, you have probably read these novels and want to have your say on them, so I will stop here and invite comments about your favourite characters and story arcs. I could probably write a post on each individual character or novel. That would be too much, but Tansy Rayner Roberts has written a book of essays on Pratchett’s women if you are interested. It’s available in ebook, in Apple Books and probably also for Kindle.  I don’t agree with everything she says, but it’s an interesting read. The book is called Pratchett’s Women: Unauthorised Essays on The Female Characters of Discworld.

If you have read these books, what do you think? If not, what are you waiting for? 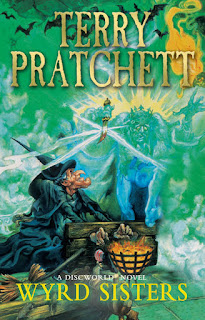 Posted by Sue Bursztynski at 6:33 AM

Pratchett has been on my radar for years but I have not read him. I really must give Discworld a read.I think that the best fantasy stories are about things much bigger then themselves.

And yes, Brian, the Discworld novels are about things bigger than themselves while putting a smile on your face. If you do give it a try, I recommend starting with Mort rather than the first book, The Colour Of Magic. His early books are not as good as the later ones, and he himself recommended starting with that one.

Great author! Definitely worth the post. Thanks for sharing this.

Thanks, glad you liked it.

Love, love, LOVE Pratchett and Discworld. I have read every book in the series EXCEPT for a couple with Rincewind: I did read the first, Colour of Magic,after I discovered Discworld through the witches, then Death, The City Watch, and so on. Rincewind and his luggage just didn't hold my interest all that much.

As much as I love Capt Vimes, my favorite is the Tiffinay Aching & the Nac Mac Feegles books.

Sad he's gone; even sadder that he won't get to see Good Omens, the show.

Stuart, I agree the Tiffany Aching books are wonderful. They are the ones I reread the most. Next are the Vimes, then the Death/Susan Ones.

Although not my favourite, Rincewind grew on me, as the books improved. In his later books, he was clearly speaking for the author. And he wasn’t a coward, either. Not really. Just sensible enough to avoid danger. When it made a difference, he saved a child instead of running, facing a bunch of Lovecraftian monsters with no weapon but a sock full of sand...

Pratchett is my favourite author of all times, I'm absolutely in love with his world. It broke me when he died and no one around me really understood. The idea of losing all these characters. I'm know all the Discworld books but I'm catching up with the rest of his bibliography. He was prolific!

I think it broke a lot of us, Melanie. I even tried that thing where you kept his name alive via the Internet, but couldn’t work it out, A friend and I downloaded one of his novels when it came out, together, on our iPads so that we got it at exactly the same time. After we had th sad news, we wen5 to the pub to have a drink in his honour. No daiquiris were available, though, not even strawberry let alone banana!

Yes, he was very prolific. I remember hearing him talk one time, about having finished a book. “And then,” he said, “for about half an hour I was a man who wasn’t writing a book!”

Yaaas! I've read all of them. They are AMAZING! Especially the city watch novels

They are wonderful! Um, you do realise this post was written last year?