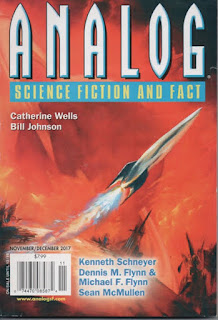 Today’s A to Z author is Aussie Sean McMullen.

I’ll be honest: I know this author personally and have known him since before he sold his first story, as he lives in Melbourne. We met at a science fiction convention, where he was organising a writers’ group to meet monthly.

It has been fascinating to watch him shoot up from wails of “I nearly sold that story!” and “They wouldn’t buy it unless I rewrote it to set it in America!” to a bestselling author with his work translated into a number of languages.

Poor Sean. It took him years, while his daughter, Catherine, made her first sale, to British SF magazine Interzone, at the age of ten!

Most of his career he has been working a full time day job, in science, but writing prolifically. For many years he was a member of the SCA(Society for Creative Anachronism), which involves pretending to be in the Middle Ages and learning about things mediaeval, including dance, clothing, heraldry and foods. He was a fighter, wearing armour and fighting at SCA tournaments, so he has a good understanding of those things, but he writes much more science fiction than fantasy, these days mostly short fiction. 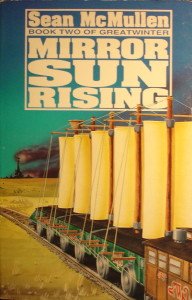 There have also been fantasy novels, including Voyage Of The Shadowmoon, and time travel- Centurion’s Empire.

In recent years, he has been writing for children and teens via Ford Street Publishing, short fiction in the anthologies Trust Me! and Trust Me Too!, but also the fantasy Warlock’s Child series with Paul Collins and two time travel novels Before The Storm and Changing Yesterday. Those two especially are a hoot. In Before The Storm a brother and sister living in Melbourne in 1901 meet two teens from the distant future who have come back to stop their own time from happening, whatever it costs them. It’s a nasty, dystopian world of war and it happened because some terrorists from the future blew up the first meeting of the Australian Parliament... 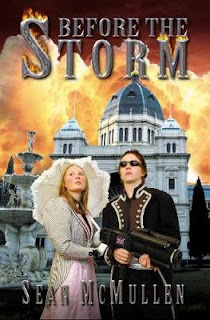 For readers outside Australia, we had something called Federation in 1900. Before that, what are now the state’s of Australia were doing things their own way. There was no Federal government. Before Canberra became our capital, Parliament was meeting at the Exhibition Building in Melbourne. So that is where the action happens in this novel. The sequel, Changing Yesterday, takes place on a ship going to Europe.

Personally I like his books for younger readers more than the ones for adults, but I would say that, wouldn’t I, teacher librarian that I am!

Sean is selling well to science fiction magazines and there are several collections of his short work, including a recent one.

Posted by Sue Bursztynski at 3:54 PM

I'm sorry to hear you're having spam issues. I'll switch over to my Google Account now to save any future hassle!

The Society for Creative Anachronism is such a cool title. I'm a steampunk lover which could definitely be described as a creative form of anachronisms. And my sister is a Viking reactor - an archer! Though she also has a sword short and shield.

Before The Storm sounds like another for the list. I love a good time-travel to prevent a future dystopia plot!

Thanks, Melanie! I will continue to follow your blog after the A to Z, it’s so delightful! My concern was that people without a Google account could no longer comment once it’s switched back.

The SCA is strictly Middle Ages, though I’d bet there is an organisation for steampunk costuming. I have some friends who are very much steampunk costumers, including author Michael Pryor, who wears his top hat and other such stuff to conventions.

Viking re-enactment sounds terrific! The SCA doesn’t do anything too dangerous. Our swords were always made of rattan cane. The Varangian Guard does metal weapons.

Better for me to do the switch now so I don't get confused when I can't comment in May! Also gives me time to figure out how it works again - I see I actually commented twice XD

Thank you! I do try hard with my blog. It's a real joy to find people visiting and I'm making so many new friends!

SCA are far more sensible, clearly! My sister often comes back with the most horrendous bruises.

You did comment twice! 🙂 Thank goodness for moderation. A story for you about injuries. I was doing fighter training with the SCA, to help with my writing. We had that at Melbourne University. During a break, a friend and I took a wander around the campus. We saw some folk practising Morris Dancing, and agreed it was lovely. We were seriously considering giving it a go till a chat with one of the dancers persuaded us otherwise. There were broken fingers from those sticks! The worst we ever got was the odd bruise, and nothing too bad, as we wore armour.

Blimey - broken fingers from Morris Dancing?! How hard are they hitting those sticks?! Yeah, I'd steer away from that. I'm really not one who's into hobbies that run the risk of broken bones. My sister is the brave one - I prefer reading and video games!

Very wise of you, Melanie! Yes, the joke was that hitting each other in armour was less dangerous than dancing around to music! 😂

"Morris Dancing: The Bell Pads Return" is a great, but underrated movie. It never got more than 3 Sticks from the critics. I'd give it 4 1/2 Sticks as a guilty pleasure. :)

Hi Stuart! I’m afraid I have never heard of this film, so will have to take your word for it. Nothing wrong with a guilty pleasure or two!