#AtoZ Challenge: H is for Harry Harrison and Barbara Hambly

Today’s post in the A to Z Challenge is H is for Harry Harrison. Have you heard of him?

I bet you have heard of his work, even if you haven’t heard of him. Soylent Green, anybody? Yep. A classic science fiction film with Charlton Heston in the lead, which has that famous line “Soylent green is people!”

It was based on Harrison’s novel Make Room! Make Room! , a dystopian in which the world is hugely overcrowded and people are still staging demonstrations against contraception, and the hero, a cop, is trying to solve a murder. Mind you, in the novel soylent green was not people, it was just a very expensive food that the hero certainly couldn’t afford on his pay. But don’t let that stop you from seeing the film. It was good.

He wrote a number of series, including the Eden trilogy in which that comet never hit the earth and dinosaurs were not wiped out. Some of the smaller, smarter ones evolved into a sentient species and developed advanced technology based on genetic engineering - even their computers are genetically engineered living things! They share a planet with humans, whose tech is not as good.

But what he did best was humour. I first discovered him through The Technicolor Time Machine, in which a film company about to go broke has just enough money to produce one more film by time travelling into the past, where they can get lots of free extras and sets. They decide to film the story of Viking settlements in America - then realise that the only reason the Vikings settled in America was because they made a film about it! 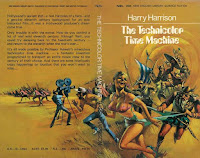 He did a couple of satirical novels, Bill The Galactic Hero and Star Smashers Of The Galaxy Rangers.

What he is best known for is the Stainless Steel Rat series. Slippery Jim Di Griz, the hero of the series, is a thief who has been caught and recruited to work instead for the Special Corps, a law-enforcement and spy agency composed entirely of former criminals. In the course of this, he meets Angelina, a fellow thief and con artist, and they marry and work for the agency together. These are very funny space operas and well worth a read.

I recommend anything by this author! 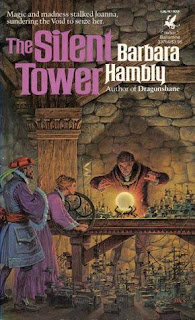 H is also for Barbara Hambly! Barbara Hambly is an American author of fantasy, SF, horror and historical crime fiction. She has a day job teaching history at a community college and still manages to get through a lot of writing.

I first discovered her through Dragonsbane, a fantasy novel in which a knight is asked to slay a dragon, as he was the hero who killed one before. The thing is, he only did it because it was necessary and he did it with poisoned harpoons, because there is no way a small human in armour is going to kill a giant firebreathing lizard without being cooked! This does not impress the young man who comes to ask him. There are sequels which I admit I haven’t read yet, but plenty more series to read. My favourites are the Antryg Windrose series, which came out as a trilogy, and she is now producing short stories and novellas on Smashwords. Antryg Windrose is a wizard who is basically Tom Baker’s Doctor, only he wears cheap jewellery instead of long scarves. The author admits he’s the Doctor. They are portal fantasies in which the heroine, computer programmer Joanna(his Companion, of course, then lover) goes into his world to stop a dark lord type from building a computer from which he can rule the universes. The books are a delight and I’m now reading my first of her self published Antryg stories.

Another series I like are the James Asher vampire novels. I’ve posted about these before and will let you read them for details. She is the only vampire novelist I know who has figured out the male vampire lovers so beloved of teenage girls these days are highly unlikely - and why. It doesn’t mean they can’t love. They can and do. They just can’t consummate it physically, because dead, right? No blood flow. Sorry, girls!

She also does historical whodunnits, both the wonderful Benjamin January series and a smaller series written under the pen name Barbara Hamilton, in which the heroine and sleuth is Abigail Adams, wife of the future President.

I’ll leave those for now, as this A to Z is about SF and fantasy.
Posted by Sue Bursztynski at 4:49 PM

Your posts are bringing back memories for me. I have not even thought of Harry Harrison in years. The Stainless Steel Rat Books were awesome. Perhaps I will give the first one a reread.

Indeed, Brian, classic novels! I hope you enjoy your reread!

I have read a few of his books, but not the humorous ones. I'll see if the library has them.

Hi Stuart! I hope you enjoy them.

Hello Sue! I have read, I think, none of these books--but I may have to fix that! I do like humour+anything, so that appeals to me.
As for the vampire blood-flow problem, I'm not sure I've ever seen it addressed in a fictional work, but I believe it is an important part of the RPG Vampire: The Masquerade. Which I've never actually played, but I've read lots of the source-books for it, because it is a cool setting. Anyway, in Vampire: The Masquerade, vampires are impotent--but there are a couple of ways around it.

Hi Melanie - I’m intrigued, though with RPGs a lot depends on the roll of the dice, eh? I have only ever played D and D and that was years ago.

Hi Zalka! Yes, it is hilarious - read it when you need cheering up. I guarantee a laugh out loud.

Harry Harrison was on om my must-read-everything authors from the Stainless Steel Rat series to Make Room Make Room! I even have some of his alternative histories on my Kindle left to read. Warm fuzzy laughs and memories.

I do recall there was a novel called A TransAtlantic Tunnel, Hurrah, though I haven’t read it. What are the other alternatives? I love AU! I read a lot of Harry Turtledove.

The Hammer and the Cross series is the Harry Harrison on my Kindle - alternative history in the Viking era. [I have a draft AH Viking novel in my WIP heap.]

Thanks, Roland, must look it up.

My god I’ve not read any of these! So much reading! What should I start with??

Try a Barbara Hambly. Harry Harrison is wonderful, but BH is alive and still writing. If you like classic Dr Who, Tom Baker variety, start with The Silent Tower. Just be aware it was published in the 1980s, and as a result, there is a character with a very powerful computer that has 20 megabytes! She is aware of that, but can’t change it now. But the characters and story are wonderful.