#AtoZ Challenge: V is for Villains!

Today I will be discussing a vital part of any form of fantasy or SF: the villain! You just can’t have a story worth reading unless there is someone or something for the hero/heroine to fight, even if it’s the weather on another planet. I’m not even sure you can have a decent mainstream story without a villain of some sort, even if it’s just a nasty boss or a dreadful school Principal.

Which is why I’m 60,000 words into a YA fantasy novel and have stopped till I can sort it out. There was going to be a villain, but I suddenly realised she wasn’t villainous after all. Okay, she stuck the heroine’s mentor in a tree for fourteen years, but she had good reason for doing it...Which left me without a villain.  There was one who was meant to arrive late in the novel, but without an ongoing baddie, the story was not as good as it could be.

Anyway, there are huge numbers of villains in speculative fiction, and I am not planning to write a book-length post, so I will just pick a few of my favourite villains from books I have read. 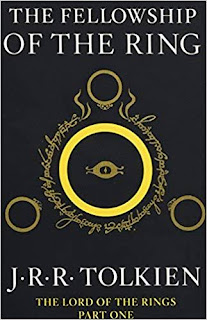 What makes a good villain? I prefer my baddies to be more than two dimensional baddies. Even if we hate them, there has to be something that tells us they might be real. That said, there is very little you can say about the likes of Sauron apart from the fact that he is evil, and always has been. If you read The Silmarillion, the prequel to The Lord Of The Rings, you will find him talking the rulers of Numenor(Middle-Earth’s Atlantis)into doing things they shouldn’t. That’s before he becomes a scary Eye. He has never had any reason we can think of to be what he is.  Yet he is one of fantasy fiction’s most splendid baddies, don’t you think?

Keeping to Tolkien for a bit, the villain of The Hobbit is the dragon Smaug. It’s because of him that the Dwarves are wandering and have lost their homes. Smaug sits on gold because that’s what dragons do, but when he has finally left the caves where he moved when he almost wiped out the Dwarvish community living there, Thorin Oakenshield, a brave, heroic Dwarf King who has been one of the good guys, starts to get a sickness for gold and treasure himself and refuses to share any with the people who have helped him and his followers and who have, themselves, lost family and homes to the dragon. It’s not just magic. When he is dying, he tells Hobbit Bilbo Baggins that the world might be a better place if more people enjoyed the simple pleasures of life like the Hobbits. He was vulnerable to the gold fever that overtook him because of something in him, not just the dragon’s evil. Thorin might have made an interesting, three-dimensional villain. But he died first, repentant.

Darth Vader was a villain until he died in his son’s arms, repenting what he had done. But he was never totally evil in the first three movies. His men didn’t seem to be afraid of him and could discuss the issues at hand, and he would explain why he was doing what he was. He kept the powers of the Dark Side to use against those who made the mistake of not taking him seriously. When he was sneered at for his belief in this out of date religion, he casually choked the man who was sneering and wiped out that laugh. At the end of the second movie, he let our heroes escape and I have to say, it was this scene that convinced me he actually was Luke’s father, despite all the arguments fans had about it afterwards.

It did spoil the character for me when he was shown in his youth as a whining young man who had no problem with killing even small children. This was supposed to be the explanation of why he turned to the Dark Side, because he was lied to, and was afraid of losing his wife, yadda yadda... However, I preferred the Vader of the original trilogy, whom I felt I understood better.

In fact, a lot of fans at the time felt the same. A friend of mine, Nikki White, wrote a series of fan stories with him as the hero, before she even saw the second movie. His armour is a cultural thing rather than something to protect him. There was a fan written novel in which Vader has, in fact, been sponsoring scientists to come up with remedies for the injuries he received when he had an accident with the Force. So when the rebels defeat the Empire, he just takes off his armour and flees. The authors had only seen the first film. There has to be something about a villain who can inspire so much fan fiction in which he is the hero, from only one film.

The Harry Potter series has a number of splendid villains. There is, of course, Lord Voldemort, whom we eventually meet as a horrible child. He has, in fact, never been a decent person or even understandable. He comes from a family we might call the Ewells of Harry Potter, but he wasn’t brought up by them. By the time Dumbledore comes to pick him up from the orphanage, he has already done nasty things to other children there, and though he is treated kindly at Hogwarts, he is already a villain in waiting. But even he gets a little bit of compassion from the author when she says that Hogwarts has been the only home for the two orphan boys, Tom Riddle and Harry Potter. He had a chance to repent, but couldn’t.

However, there are other villains in the series. Professor Umbrage, that dreadful woman we first met in The Order Of The Phoenix may have no redeeming qualities whatsoever, but she is totally believable as someone who is happy to grab the chance for power when offered, even if it’s a petty power over the staff and students of Hogwarts. There are people like that in any place where power is abused and I can assure you, she is real. I once had to work with a Principal so like her that my jaw dropped as I first read the book. How, I wondered, did this author know?  But there are others like her in real life. They are known as workplace psychopaths.

There are other villains in these novels who are more than just two-d mini-Saurons. Bellatrix Lestrange, that Voldemort groupie, is one of them. She is truly evil, but she does love her sister Narcissa and both of them were kind enough to Kreecher the family house-elf to get him on side. In fact, Hermione is the one who realises that our heroes have been treating him badly, mainly because Sirius Black didn’t like him, while Narcissa and Bellatrix were kind to him. Sirius is one of the good guys, but had nothing but contempt for Kreecher - and showed it.

Narcissa and her husband, Lucius Malfoy, are Death Eaters all right, but in the end, they realise that their son, Draco, is more important to them than the Cause.

Draco is the baddie of most of the series, but by the sixth book, Half-Blood Prince, has become just a frightened teenage boy - and Dumbledore believes he has a soul worth saving. In Deathly Hallows, he doesn’t give Harry away to his evil aunt, though he clearly  recognises him, and he nearly dies later in the novel rather than leave behind Goyle in the burning Room of Requirement. So, a villain with a bit more to him than we might think. And - May I give one tiny spoiler for The Cursed Child? He is not a villain any more in that one and he had one delightful line: “I’m being bossed around by Hermione Granger - and I’m enjoying it!”

I won’t include Severus Snape, who may not be nice, but isn’t a villain in the end. But there are far more villains in that series than I can list here.

I’ll finish with a novel that doesn’t seem to have any villains, but sort of does, Good Omens by Terry Pratchett and Neil Gaiman. In it, a demon, Crowley, and an angel, Azirophale,  are working together to prevent the end of the world, which is not far away. Crowley was the serpent in the Garden of Eden, under  orders to “get up there and make some trouble.” Azirophale was the angel with the flaming sword at the gate, but felt sorry for Adam and Eve and gave it to them to keep warm. They like it on earth and don’t want to see it destroyed.

The Antichrist has been born, but the baby went to the wrong family and has been brought up by an ordinary English couple in a peaceful village, instead of an American diplomat and his wife. As a result, the boy is human and a nice kid, but that isn’t going to stop the forces of heaven and hell from fighting it out, not as good versus evil, but just because both sides believe they can win. So, really, I’d argue that Heaven and Hell are both the villains, willing to wipe out the planet just because they can.

What about you? Who are your favourite villains?

Posted by Sue Bursztynski at 2:56 AM

I like the idea of banishing a character to a tree for 14 years...hope you sort out your villain problem!

Thanks, AJ! I do have a villain lined up, but I need to go ba pck and work him in earlier - a major task!

Yes I agree with all of this! You hit all my favourites! Professor Umbrage was always a far scarier villain to me than Voldermort. And in Good Omens, I always interrupted it as Heaven and Hell being the 'big institutions' or governments disregarding what people actually want or what's right. Brilliant post!

Everyone loves a "good" villain, although just as with heroes, I'm sure tastes vary. I like super-evil ones with panache, and redeemable ones with some sympathetic motives or qualities. Darth Vader manages to be both! I didn't really want or need a back-story for Darth Vader. I liked him just fine as he was in 4-6.
Good luck with your villain!
Black and White: V is for Vegetable Lamb

Thanks, Melanie! I do agree that Umbrage was far scarier than Voldemort, because she was recognisable as someone we might actually meet. Tom Riddle was just horrible and couldn’t be redeemed. He had a hard background but so did Harry and he did fine. I’ve known dome dreadful children, but none whom I could imagine growing up as Voldemort. And yes, Heaven and Hell were the institutions. They had plenty of willing representatives, though!

Anne, I agree with you about Vader. I would have preferred to skip that back story and maybe leave it to the fan writers to play with. Goodness knows, they have been changing canon anyway!