Catherine Jinks is an Aussie author of books for children and teens, with the odd foray into adult fiction. I haven’t read the adult fiction - there is plenty of YA to keep me busy and I haven’t even  read all of that!

Although she is best known here for her wonderful historical series centred around Pagan Kidrouk, a Christian Arab who joins the Knights Templar during the Crusades, and she has recently done some more historical fiction set in the Jacobite era(Theophilus Grey), most of her prolific output is fantastical stuff. It ranges from the Evil Genius trilogy(imagine a sort of Hogwarts for criminals in Sydney) to a cross between space fiction and horror, Living Hell, set aboard an ark ship which, after passing through a strange radiation wave, becomes a body. This body perceives its human inhabitants as invaders and uses its immune system to destroy them.

In Witch Bank, the young heroine gets her first job at a bank where the other women are witches. They work out that her “power” is that she is so meek that nobody notices her, so how can she use this power to disappear when she wants to? That one was fun!

Saving Thanehaven was set inside a computer game. There was a cheeky reference to Living Hell when the hero is making his way through other games, and that was one of them. 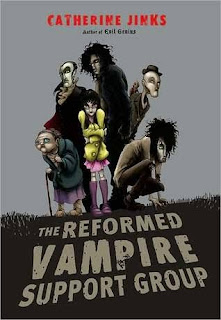 Two of my favourites were The Reformed Vampire Support Group and its sequel The Abused Werewolf Rescue Group. The premise is that a bunch of Sydney vampires are trying desperately to prove they are harmless, because someone has murdered the vampire who turned them all. And they are harmless to humans. None of them likes what they have turned into. For one thing, being turned doesn’t bring back youth and strength if you were old and weak when you were turned; one of them was in her eighties at the time, and now faces an afterlife of arthritis and every other thing that comes with age. The heroine was fifteen when she was bitten and is now forever under age for so much as a driver’s licence, and still living with her mother, who ages while she remains fifteen. Fortunately, she is able to make a living as the author of paranormal adventure novels. One of the group, who was a doctor in his life, has invented a medication that means they don’t have to bite humans, though when the craving does come on them too badly, they have bred guinea pigs for this purpose. They have the help of a Catholic priest, who drives them around and lets them use the church hall to meet.

Which certainly goes against the notion that vamps can’t abide holy things.

In fact, Scott Westerfeld makes vampirism a parasitic illness you can get from even as small a thing as your cat’s breath, and you hate something that was important to you before, such as your prized guitar. No connection to religion, but in the old days religion was what was most important to people. In Richard Matheson’s I Am Legend, it was whatever religion you had believed in before the vampire disease took you, so a Jewish vamp would not be bothered by a crucifix, but terrified of a Torah. Tanya Huff’s Henry Fitzroy, Henry VIII’s illegitimate son(in real life he probably died of TB, in this series he became a vampire), meets a sweet vampire girl who is married to a courtier and is a devout believer. He nags her to turn him.

So Catherine Jinks’s vampires manage fine without religious allergies and even have a kindly priest to help them.

She has won a lot of awards, both the Children’s Book Council and the Aurealis Awards for speculative fiction, and even a couple of Davitt Awards for crime fiction, for the Evil Genius series.

There are so many books by her that it might be simplest, here, to give you a link to her Wikipedia entry.

Her books are easily available online, on Amazon, Book Depository and others, and several in ebook and audiobook.

Posted by Sue Bursztynski at 2:43 PM

The vampire books are going on my "to order from the library list." Sounds like a fun read. Thanks.

I normally don't do vampires, but you listed some interesting takes on the idea, and the one by Jinks does sound fun.
Black and White: J is for Jubjub

I don’t normally do vampires either, but these were different enough to interest me. None of them is actually a standard vampire story, and in I Am Legend, thr premise is that everyone except one man has turned into a vampire, because it’s a disease. He eventually has to face the fact that, with his running around staking people trying to get on with their afterlives, HE is the monster!

I hope you will try them.

I am Legend was THE vampire novel for me. Might be tempted here.

Agreed, Roland, a very special book, which made an interesting film with Charlton Heston(I haven’t seen the remake). Catherine Jinks’s novels were YA and humorous, though, not remotely like I Am Legend.