F Is For Fantasy Fiction Based on Greek Myth

Here are some books(and one film) with Greek mythology themes and a bit of fantasy!

I’ve only read a couple of these books, but they are fun and they get kids interested in Greek mythology. The hero is a son of Poseidon in the modern US. He meets and has adventures with other teenage demigods. The books were hard to keep on my library shelves. There is a film based on the first book, Percy Jackson and the Lightning Thief. The author has written a Percy Jackson guide to the myths, so quite educational!

Circe by Madeleine Miller. Mentioned already here, plus reviewed a while back. The heroine is Circe, best known for turning men into animals, and the story is seen from her viewpoint.

The King Must Die and its sequel, The Bull From The Sea by Mary  Renault

Not quite fantasy, apart from the fact that Theseus, the hero, can tell when an earthquake is coming, a family trait. The first novel is the story of Theseus from childhood to his return from Crete, the sequel covers the rest of his life. The teenagers sent to Crete are all small and light, including Theseus, and are not sent to be eaten, but to train as bull dancers. The bull headed man is just a heraldic device. Minotaur is the title of the heir to the throne, like the Prince of Wales. Mind you, he’s not a nice man!

Henry Treece wrote a lot of children’s and YA historical novels, including  some on Greek mythology themes. I have read Oedipus, which has interpreted the myth very interestingly. It does have a flavour of Mary Renault. I have also read and enjoyed Jason, which is available on Apple Books.

Kiwi author Ken Catran wrote Voyage With Jason, in which the voyage of the Argo is seen from the viewpoint of the ship’s cabin boy!

Not fantasy, but the film, O, Brother, Where Art Thou, is inspired by the Odyssey. A trio of convicts escape from a chain gang in the American South during the 1930s. The main character, Ulysses, wants to get back to talk his wife, Penelope, out of marrying someone else. Along the way, they have adventures involving Sirens(women singing as they wash clothes by the river and seducing our heroes), Lotus Eaters(a group of religious folk going to the river for baptism), the Cyclops(an insane one-eyed Bible salesman) all happening among bluegrass music and folk songs. A wonderful film!

Till We Have Faces by C.S Lewis. The story of  Cupid and Psyche, the Beauty And The Beast story told in the Roman novel The Golden Ass, as seen through the eyes of one of her sisters. I can’t tell you more without spoilers. I managed to find this in ebook, though the print book is probably well out of print. It’s not as well known as the Narnia books, but well worth a read.

The Dancer From Atlantis by Poul Anderson. A time travel novel in which our hero and a few other people from different historical periods are swept into the time of Theseus and bull dancers. In this story, tributes are taken to Crete, not to be eaten or even necessarily as bull dancers, but to learn to live like Cretans, so that by the time they go home, they have become allies to the Cretan court. Theseus is the villain.  Oh, and it includes the Thera explosion, with the suggestion that Thera is the inspiration for Atlantis. 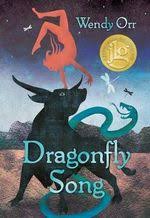 Three children’s novels by Canadian/Aussie author Wendy Orr(watch out for my review of the final one, coming soon). They are not exactly connected with the myths, but they are set in the same era and there is one throwaway line about Troy in the third book. The first one, Dragonfly Song, has a fair bit of fantasy in it and features a young girl with elective mutism who goes to Crete as a tribute, to train as a bull dancer. 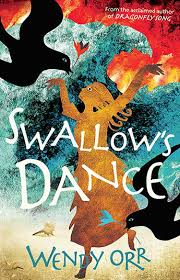 The second, Swallow’s Dance, is about a girl, Leira, who escapes from the Thera explosion with her family, after her father has a scary dream. 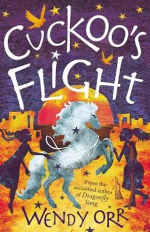 I’m just finishing the third,  Cuckoo’s Flight, about Leira’s granddaughter, whose father is a Trojan refugee. More about that when my review goes up. A wonderful trilogy! The first two have won awards, so I’m not the only one who thinks so.

The Hunger Games has a theme connected to Greek myth. In the story of Theseus, the tributes are sent to Crete as a punishment for the death of a son of Minos. In The Hunger Games the tributes are sent to the Capitol as a punishment for a rebellion that happened a long time ago, which makes it clear to the Districts just who is in charge and what could still happen if they try it again. Plus Katniss offers herself as a tribute, like Theseus, and overthrows the oppressive regime.

Anything else you can think of?

Posted by Sue Bursztynski at 3:00 PM

I never read Rick Riordan's "Percy Jackson" series, although I did watch a couple of the (pretty bad) films made from it. I did, however, read and enjoy Riordan's retelling of Norse mythology in his "Magnus Chase" series.

"O Brother, Where Art Thou?" is one of my all-time favourite films, not least because of its retelling of the Ulysses myth.

One book I enjoyed reading was "Gods Behaving Badly" by Marie Phillips. It tells the stories of the deities of Mount Olympus who have all fallen on hard times in the 20th century due to lack of belief and reverence. Apparently a movie was made of the book too, but it was so bad it never got distributed. Probably went straight to video, if that. I've never seen it.

Oh, and recently that most marvelous, witty and entertaining of writers, Stephen Fry, has published 3 books retelling the Greek myths, called "Mythos" "Heroes" and "Troy." I haven't read them yet, but they are on my "to read" list.

Hello! Wow, I strike out here, completely. I haven't read any of these. Of course, I've heard of some of them--Percy Jackson and Hunger Games and O, Brother, Where Art Thou?--but I've never read or watched any of them. I've always meant to see O, Brother, Where Art Thou, though, it just hasn't actually happened yet.
What an interesting list! And I didn't realize that The Hunger Games had mythological themes.
I may check out the C.S. Lewis one. Thanks!

This post is a wonderful reference for anyone interested in Greek mythology .... i have read the whole RICK Riordan series and the fifth and final book was the best in my opinion... I am keen on Circe after reading about the book in your posts

Hi Sue
Not a film, but have you ever covered the Jim Henson 'The Storyteller' series? It's wonderful in the stories they adapt. Myths and Fairy Tales told with a full sense of magical realism.

I used to show certain episodes to my elementary classes for comparisons in written stories and adaptations. That led to them getting the idea of performing their own interpretations.

I love O, Brother, Where Art Thou? My favorite of The Coen brothers films.

I know I read Mary Renaulds, although it was a looong time ago and I don't remember much. I did enjoy picking out the Odyssey connections in "Oh Brother Where Art Thou."
Black and White: F for Faerie

Amazing recommendations. I've heard so much about Circe and love the film Oh Brother Where Art Thou (great soundtrack too). Good luck with your A to Z!

Hi Debra! Yes, Rick Riordan has done a lot for getting kids interested in myths and legends, hasn’t he? Probably time for me to read those Stephen Fry books, a few people have recommended them here.

Thanks for your kind words, Jayashree!

Hi Stu! I have seen some of the Storyteller series(and have mentioned his episode on Daedalus, hosted by Michael Gambon). A wonderful series! Amazing who turns up in it, too. A very young Sean Bean is in “The True Bride” and doesn’t die! 😂

Hi Anne! I hope you get around to a reread of Mary Renault some time, those books are classics. I loved everything about O Brother, including that glorious music!

Hi Melanie! I believe Susanne Collins actually said the Greek myths were one of her inspirations, especially Theseus, but I noticed it before that was confirmed for me,

Thanks, Lynette! I hope you have a go at reading som3 of these books some time, and welcome to my blog!

O Brother Where Art Thou is such a good film, and the bluegrass is fun to listen to as well. I spotted some of the mythological connections, but no all, so thanks for filling in the gaps.

Percy Jackson was a huge hit with my Barbarians. I hadn't thought about Hunger Games, but great pick-up!

I haven't though of the Hunger Games as actually being inspired by Greek myth -- thanks for that!

Ronel visiting for the A-Z Challenge with an A-Z of Faerie: Fickle High Fae