Glaucus is the name of a number of characters in Greek mythology. One was the father of Bellerophon, the guy who rode Pegasus(see my earlier post). Not a nice man. He wanted his mares to be spirited enough to win races, so he didn’t let them breed and offended the goddess Aphrodite, who complained to Zeus that he fed them on human flesh. Anyway, she took them at night to drink from a well sacred to herself and fed them a herb, hippomanes, which sounds to me like something meaning “drives horses crazy”. The next time he harnessed them up, they attacked and ate him. That was the end of Glaucus, except he is supposed to have hung around as a ghost at the Isthmian Games, scaring the horses of competitors. Robert Graves thinks this might be about the sacred king being killed by women in horse masks at the end of his reign, which makes me think that real life was just as bad as what happened in the myths, only no actual gods involved. If he was indeed guilty of encouraging his horses to eat human meat, then his end was karma, though knowing Greek gods, Aphrodite was more interested in the no-sex rule than flesh eating. After all, she had to feed the horses drugs to drive them crazy, right?

Another Glaucus was a son of Minos and Pasiphae. The poor little boy was wandering around in the Labyrinth and was found drowned in a huge jar of honey, after a competition connected with an oracle said the man who did the best  simile for a colour changing calf would find him. A man called Polyeidus won the prize - it was like a ripening mulberry, he said - but found the prize was having to find the child, then not being let out till he figured a way to bring him back to life. This being Greek mythology, he did, when he watched a snake bring its mate back to life with a certain herb.

Young Glaucus was then taught divination, reluctantly, by Polyeidus, who took it back when he left Crete by telling the boy to spit in his mouth. Oh, well.

There was also a Glaucus who was a sea god. He didn’t start off as one, though he may have been a demi god, a son of Poseidon. In any case, he was mortal, and is said to have noticed a certain herb or grass that brought a fish back to life. He had some and jumped off the cliff into the sea, now immortal. He lived underwater off the coast of Delos, and was known both for his oracular skills - apparently he taught Apollo himself - and for his enthusiasm for sex.

He turns up in Madeleine Miller’s Circe, as a perfectly nice young fisherman, her boyfriend for whom she organises immortality. He turns out to be thoroughly obnoxious as an immortal and when he starts dating the nymph Scylla behind her back, Circe turns her into a man-eating monster.

Now for one G I’ve mentioned a number of times, Robert Graves. Graves was a poet and historical novelist, among other things. He wrote I, Claudius and Claudius the God, which were adapted for a brilliant TV series with Derek Jacobi in the lead role, and John Hurt as Caligula. If you haven’t seen it, I highly recommend it. I have it on DVD, but some streaming platform must have it. It was inspired by Suetonius’s The Twelve Caesars. We owe our image of the early emperors from Augustus onwards to Suetonius - and Graves. 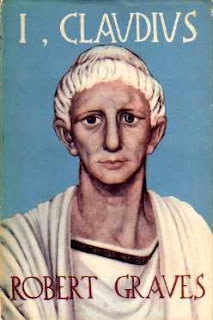 He wrote a novel, Homer’s Daughter, which told the story of the Odyssey from the viewpoint of Princess Nausicaa, the Phaeacian girl whose family entertained Odysseus and helped him get home. Graves believed that the Odyssey was written by a woman because it has so much feminine detail. On the other hand, it also has Telemachus talking to his mother in a manner that should have earned him a spanking if he had been younger. Very patriarchal!

Graves was also a classicist and folklorist, who wrote The Greek Myths, a classic and maybe definitive collection, with lots of footnotes and commentaries, plenty of stuff about the Triple Goddess and the sacred king. It certainly got me into the myths, and I was in primary school at the time. My sister borrowed it four times from the library before I finished it. I still treasure my own copy. He also wrote The White Goddess, which was about a lot of stuff he used in The Greek Myths, but mostly Celtic rather than Greek. He was inspired by Frazer’s folklore classic The Golden Bough. (I have the Frazer in ebook).

I’ll give you a link to his Wikipedia bio, because it lists all his work, including his poetry collections.

By the way, he makes an appearance in an episode of Young Indiana Jones! It’s set during World War I when Graves was fighting in France.

Tomorrow, come back for H Is For Helen Of Troy and  Heracles.

Posted by Sue Bursztynski at 2:14 PM

I thought I had heard most of the stories from Greek mythology, but these are all new to me. Thank you for sharing! I look forward to reading more.

Yes, I also enjoyed "I, Claudius" (the Masterpiece Theatre series on PBS here in North America) -- Derek Jacobi was outstanding, of course. Robert Graves was a true pioneer in helping to bring the Divine Feminine back into modern consciousness, but I must confess that I found "The White Goddess" intractably unreadable.

Hi Melanie! Glad to have introduced you to something new! 🙂

Hi Debra! I confess I didn’t get far into The White Goddess, though a lot of Robin Of Sherwood fan writers loved it and used the themes in their stories. Which I have to say were pretty silly.

Wow, I agree with Melanie Crouse I thought I knew most of the stories, but these are new to me. Thank you so much for sharing.

I, Claudius was great. I also watched in on Masterpiece theater, most likely the first show on PBS I had to watch.

I've heard of the flesh-eating horses before, but not in full detail. Thanks for filling in the blanks.S

What a delight to pop over today and discover your series. I'm in the band that had never heard the Glaucus tales, so thanks. Greek mythology is endlessly fascinating, even if it's heavily weighted in the trauma and drama departments.

I enjoyed the I, Claudius series as well. You've inspired me to revisit it.

Hi Deborah! So pleased you have read something new to you. Yes, it’s not for nothing so much Greek drama was tragedy. They used to end the tragedy trilogies with a farce, and no wonder! Their comedy tended to be send ups of politicians of the time.

I really, really want to re-view my boxed set of I, Claudius when time permits. It was brilliant stuff, and Patrick Stewart in a wig was a wonderfully evil Sejanus...

Hi Stu! As a matter of fact, there were other flesh-eating horses, the ones belong ing to King Diomedes. It was one of the labours of Heracles.

I was initially confused by your first Glaucus, remembering the one in Circe, but just because it's not exactly a common name now, I shouldn't have judged it to be one in Greek mythology ;)

Thanks for the Graves link - I'll have a browse through it to make decisions on what to add to the TBR.

I knew of the Glaucus of the Labyrinth, but not the others. And I have heard of I, Claudius (but only heard of it, never read it).

Added The Greek Myths to my TBR!

Ronel visiting for the A-Z Challenge with an A-Z of Faerie: Goblins