The first is the Titan goddess Rhea. Rhea was the wife of Cronos, an early king of the gods, and the mother of several Olympian gods. There had been one of those prophecies that Cronos would be killed by one of his sons. He decided to swallow the children Rhea had borne him, including, for some reason, the daughters, Hestia, Hera and Demeter. After he had swallowed Hades and Poseidon, Rhea decided she had had enough and smuggled her third son, Zeus, away to be raised by some nymphs and gave her husband a stone wrapped in swaddling clothes. To make sure his crying wasn’t heard, she arranged to have the noisy warriors, the  Curetes, dance around clashing their shields.

When Zeus was grown up, she helped him give his Dad an emetic in his drink, so that he would vomit up the earlier children, as presumably gods can do this without digesting anything or harming the people inside.

Later on, Rhea persuaded Demeter to come off strike after her daughter Persephone was kidnapped by Hades, and come to a compromise.

The lesson we learn in both cases is, never come between a mother and her children.

And now, we come to Mary Renault, author of several books set in Ancient Greece,  two of them based  on the Greek myths. I discovered The King Must Die, the story of Theseus,  when I was in primary school. My copy over the years has become so worn with reading and rereading that I ended up buying the ebook.

Mary Renault was born in Essex in 1905. She became a nurse during World War II and met her partner Julie Mullard, a fellow nurse. Winning a large award gave the couple the chance to move to South Africa, where being gay wasn’t going to cause them the headaches it did in England. Before you say, “But apartheid!” she was very much against that and joined the Black Sash, a women’s group working against apartheid.

Oddly, though, she was not keen on the gay rights movement.

Her Ancient Greece novels included a trilogy about Alexander the Great, starting with Fire From Heaven(I found a proof copy of that at a school fete). I also have a copy of her novel The Mask Of Apollo, about an actor in Athens at the time of Plato. That one made me feel as if I was there. 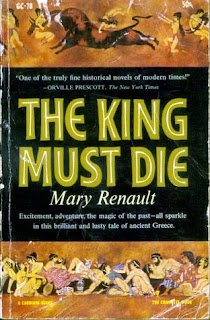 However, the real power is in her two Theseus novels, The King Must Die and The Bull From The Sea. Mary Renault’s Theseus is not tall, despite what the Greeks believed. The reason she suggests  is that if he had been tall he wouldn’t have been much use as a bull leaper. He is a king who believes fervently in his job, but a king of a patriarchal society; he certainly does overthrow a matriarchy on his way to Athens early in the first book. The title is based on the killing of the sacred king; he wrestles and kills one on his journey, takes his place and manages to avoid being killed himself at the end of his own year.

The Bull From The Sea was the second part of Theseus’ life, going up to his death on Skyros, where, like his father Aegeus, he jumps off a cliff. He has had a stroke and doesn’t want to disappoint young Achilles, to whom he is a hero.

I do like the way she works out how it might actually have happened, adapting the myth to a possible real-world setting. The only fantasy element in these books is Theseus’s ability to know when an earthquake is coming, a family ability.

Both novels were adapted for radio, as an 11 part series, in 1883, by Michael Bakewell, who went on to adapt Lord Of The Rings. If you can get hold of either radio play, I do recommend them. If you just want the audiobook, the abridged version is narrated by the wonderful Michael York.

Theseus does appear in a number of other books, including one, The Sword Is Forged, by Evangeline Walton, best known for her four novels inspired by The Mabinogion. She wrote it about the same time as The King Must Die, but couldn’t sell it for some time because Mary Renault got in first. To be honest, I think her Celtic myth novels were her masterpiece, while I’m very glad Mary Renault did beat her into print with Theseus. The Walton book just wasn’t as good.

Mary Renault wrote the classic based on this particular myth!

Tomorrow, we will discuss the story of a young woman who just couldn’t leave well enough alone, Semele.

Posted by Sue Bursztynski at 3:23 AM

Mary Renault is one of my ever favorite authors :) King Must Die was first for me too (translated to Hungarian as Theseus' Youth), and then I read all the others :)

I read and enjoyed Mary Renault's books when I was young too. A marvelous storyteller!

Of late I came across many kids named Rhea and now I know the origin ...I have not heard this story of Cronos swallowing his kids...interesting

Vomiting up your children, ugh. I've heard of Mary Renault and was trying to work out where when it occurred to me it was probably here!

Hi Zalka! She really was a wonderful author, wasn’t she? Her British history equivalent was Rosemary Sutcliff, though most of her characters are original. She makes you feel as if you were there, just like Mary Renault.

Hi Jayashree! I haven’t encountered any girls by that name, myself. Interesting to hear it’s common. Zeus also swallowed at least one person, his wife. There is certainly a lot of artwork with Cronos devouring his children.

Hi Anita! Here on this blog, you mean? I did do at least one post on Mary Renault when I had just bought Th3 King Must Die in ebook,

Yes, your blog and yes, that's where I would have read about her :)

Rhea had so much to do to keep everyone in line. I suppose she just gave up on keeping Zeus on good behaviour...


Ronel visiting for the A-Z Challenge with an A-Z of Faerie: Rabbits and Hares of Folklore