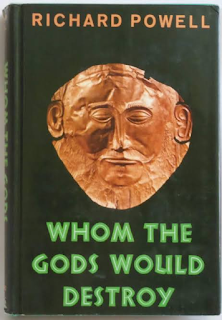 There is a saying: “Those whom the gods would destroy, they first make mad.” We aren’t sure where it comes from originally; for a long time it was attributed to playwright Sophocles, but that, apparently, isn’t true. It does go back a long way.

The title works for this book, anyway. It’s a Trojan War novel, my favourite of all those I have read. The characters from the Iliad are certainly crazy in one way or another. If you are expecting noble kings and heroes, you are out of luck. There is a lot of humour among the drama, and much of it is in the descriptions of the Greek heroes. The only one not sent up is Odysseus, who is clearly the only sane one of the lot, and intelligent.

The story is seen from the viewpoint of Helios, a Trojan boy captured on the first day of the war and growing up with Neoptolemus, son of Achilles. Helios is the son of a Rhodian slave girl in Priam’s palace, and claims Priam as his father. His mother died at his birth and he has been brought up by the horse master and his wife, a baker.

In Troy, he is friends with Princess Cassandra, with whom he learns to read and write, in Linear B.

In the Greek camp, he is befriended by Odysseus, whom he comes to regard as a father figure, but spends much of the war on Skyros with Neoptolemus and a girl called Deira, a granddaughter of Theseus.

At one point, Helios and Neoptolemus find Helen outside the city, bathing, and get the bright idea of taking her to the Greek camp so they can end the war. Helen is amused. The Greek leaders are not happy; the last thing they want is to take her and scuttle off home. She knows that very well.

I remember when I was studying first year ancient history at university there was a theory presented to us that any Trojan War would have been about economics, not Helen. I can see that. Troy would have been in a very good position to issue tolls to passing trade ships.

There is almost no magic in this book, no gods or goddesses participating. The war is really not about Helen at all; she is just an excuse. There is a bit of prophecy. Cassandra gets it right, and Helios, when he has been with her, sees the future himself, including Rome, where the Trojan survivors went under the leadership of Aeneas - in this novel shown as a decent and likeable character.

The style is chatty and very readable, but the author has done his research. Linear B was a real writing form. There is a reference to the Dorians, later to invade the Mycenaean world, and their iron swords; Helios and Neoptolemus manage to steal one each when on a journey with Odysseus. There are references to the Goddess.

I’ve read other books set in the Trojan War, such as Marion Zimmer Bradley’s The Firebrand(seen from the viewpoint of Cassandra, still in print) and Kerry Greenwood’s novels Cassandra and Electra, both in print from Clan Destine Press, but they are so very serious!

Whom The Gods Would Destroy is out of print physically, but still available on Kindle. You can get a Kindle app for iPad. It’s well worth downloading the app for this book.

Tomorrow I will be writing a short post about Xanthus and Balius, Achilles’ immortal horses. I told you I wouldn’t have to cheat on X this year!

Posted by Sue Bursztynski at 6:37 PM

I have not read it before....seems quite interesting

I love your book recommendations! I need to read this one. :)