Today’s mythical person is the Gorgon Medusa, the lady with the snaky hair. You probably know that story about Perseus killing her, but did you know there were three Gorgons? Medusa and her sisters Stheno and Euryale were the daughters of sea gods Phorcys and Ceto, as were the three Graeae, the sisters with one eye and one tooth between them, who also come into the story of Perseus.

Two of the three Gorgons were immortal; Medusa was the poor sod who got stuck with mortality and so was the subject of young heroes trying their luck at slaying a monster.

In most stories Medusa was punished by Athene for having sex with Poseidon in her temple. Poseidon may have been getting back at Athene for winning the job of patron of Athens. It was rape, according to Ovid’s Metamorphoses, so not her fault, but Athene must have found it easier to get revenge on Medusa than Poseidon, so turned the beautiful girl into a monster with snakes for hair; anyone who looked into her face turned to stone.

Her sisters were there at the time, so were also turned into monsters, but remember, they were immortal.

Poor Medusa! Stuck with those snakes for hair and taking refuge in a cave, she surely wasn’t harming anyone where she was, but the same sort of young heroes who, centuries later, would be chasing dragons, came charging up to her cave to slay her and ended up as sculptures.

And lying there asleep, minding her own business, she wakes up to find another one of these heroes getting ready to lop her head off, and this time he has equipment to help him finish her, supplied by the gods, including Athene, who was responsible for her troubles in the first place! Furious? You bet! I would be too.

Medusa has been the inspiration for a lot of creativity. Did you know there is a Gorgon on the flag of Sicily, by the way? 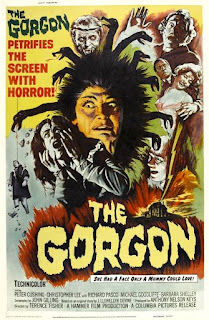 British horror film, The Gorgon, was made in 1964, starring Peter Cushing and Christopher Lee, with a future Time Lord(Patrick Troughton)as a police inspector. The Gorgon of the title is in human form most of the time, in between turning into a snake-haired being turning people into stone. This Gorgon is called Megaera and is supposed to be a sister of Medusa.

There is a short story by an Aussie author in which Medusa is still around and making a living as a sculptor, though she cheats by taking men home, petrifying them and selling them as art works!

The Medusa scene in the 1981 Clash Of The Titans is breathtakingly scary. It was stop motion master Ray Harryhausen’s last film and while the story was pretty silly, there is no doubt the Medusa scene is a classic to stand alongside the same artist’s skeleton scene in Jason And The Argonauts(which, by the way, is up on YouTube if you want to see it). Medusa is a snake herself, though with a human face and torso under the hissing snakes of her hair. It’s hard to believe she was ever beautiful or even human.

Here is a link to that scene on YouTube.

Look it up and enjoy. There is a 2010 remake, which has a cheeky reference in one scene to the original, and it’s fun, but nothing can beat the artistry of Ray Harryhausen.

Tomorrow, we meet Narcissus and Nausicaa!

Posted by Sue Bursztynski at 2:58 PM

And of course, Medusa's severed head appears on Athena's aegis (shield/breastplate/armour), another symbol, I guess, of her power.

Also in Percy Jackson and the lightening thief, she makes an appearance in the guise of Uma Thurman...then loses her head again. Also someplace there is a graphic novel about a Medusa like creature falling in love with a blind person...

Oh I love the idea of Medusa being a sculptor who cheats - hilarious! :D

We recently had a D&D adventure, where the party ended up feeling sorry for the Medusa and rescuing her instead of fighting her. She is a very relatable monster :D

Looking back at Marvel Comics of the 1960's, you can see Stan Lee's (and others) love of mythology. Norse gods through Thor. Medusa was an "inhuman" with lonnnnnngggg flowing red hair that she used to her advantage. Never turned anyone to a statue. Darn

I had never heard of her sisters before! Thanks for sharing.

Medusa is well known, so I am familiar with her. I hadn't heard of the Aussie short story, but that's a clever twist!

Hi Debra! Yes, the myth says after the adventure, Perseus handed back his special equipment and gave Athene the head for her aegis. Nice going, Athene! First she turns a woman into a monster for being raped, then she uses the head.

Hi TWW! I like the idea of her falling for someone blind.

Hi Debs! Yes, it was a cute story.

Hi Zalka! Yes, very relatable. Well, unless you happen to be in her cave, anyway. I’m not sure I’d want to be getting chased. 😉 Glad to hear your D and D party felt sympathy for the creature. Might be a bit hard to take her along, though!

Hi Stu! I missed those early comics, alas! But yes, the Norse mythology does turn up a lot in Marvel.

Hi Iain! Her mortality means she is the one getting pursued by all the young idiots. No point in bugging her sisters, is there? Glad you’re enjoying!

Hi Lynnette! Glad there was something new for you here.

Hi Anita! The short story was published in a collection of the author’s work by one of our many micro small presses. I can’t remember if the author was Simon Haynes or Simon Petrie. Haynes, I think. It was clever, yes.

On a completely unrelated note, Peter Cushing also played Dr Who in two full length films - the only Dr with a moustache. The second film, also has an unusually dynamic role for Bernard Cribbens, who played Donna Noble's grandfather Wilf during David Tennant's tenure.

I’ve seen one of the Peter Cushing films, but I hadn’t known that about Bernard Cribbens! How delightful! I loved Wolf.

Medusa's story is just one of many where the victim of rape gets punished instead of the perpetrator -- at least she gets awesome powers.

Ronel visiting for the A-Z Challenge with an A-Z of Faerie: The Raven Faery: Morrígan

Stuart Nager is absolutely right about the "mining" of mythology for character/plot inspiration by Marvel Comics and now by the Marvel Cinematic Universe (MCU). "Thor" and "Medusa" are the two most obvious "steals," but many see the MCU's Captain America and Winter Soldier saga as a modern retelling of the myth of Achilles and Patroclus.

Been enjoying your series.

I have dying to do something from Medusa's point of view. To show how she was the wronged party all along. I don't know, something to improve the lot she was given.

Another neat post, and again, you're filling in lots of bits of the stories that I have either never known or have forgotten! This time, I didn't know that Medusa was the only mortal one of the bunch. Ouch! Also, you make a good point, about how angry she must quite rightly have been about the whole situation.

Agreed, Ronel! Though I think I’d rather have a super power I could control. 😉

Hi Tim! You write it, I will certainly read it!

Agreed, Melanie, she had every right to be angry!

I saw the theory that Medusa was originally a chthonic protector goddess, but the classical Greeks had to turn everyone else's gods into monsters (especially women and earth-type goddesses), so they demoted and demonized her. Even so, Medusa-heads often appear as protective amulets.
Black and White: M for Middle-earth

I discovered Medusa thanks to Clash of the Titans. It kickstarted my love for Greek mythology and I still find the Medusa of the film terrifying.

Hi Anne! I think it’s not for nothing that Medusa appears on Athene’s aegis. But yes, they were forever overthrowing the matriarchy, weren’t they?

Hi Guillaume! Absolutely, that Medusa was terrifying! Ray Harryhausen really knew what he was doing. So glad to hear it got you into Greek mythology! I bet Mr Harryhausen would have been pleased, too. I suspect you aren’t alone here.