YA Showcase 2018 At The State Library!

I haven’t been to this annual event in a few years and the last time I went there was no goody bag on offer, just someone’s non fiction book with a camel on the cover, help yourself.

This time, there were several publishers or publishers’ reps, each of whom had five minutes, speed date style, to tell us about some of the books coming out next year, including my lovely publisher Paul Collins of Ford Street, who had come with his partner Meredith Costain, who must have just returned from her trip to an Indian writers’festival, and one of their new authors, whose debut novel, a futuristic thriller, will be out next year. There were also two panels of authors talking about their books. 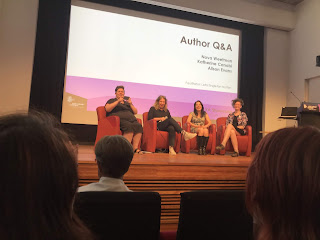 There certainly seemed to be some fascinating titles coming out and, on examining my goody bag, I found three books, two of them ARCs/proof copies of books mentioned. I’ve started reading the American one, Watch Us Rise, by Renee Watson and Ellen Hagan, which seems to be powerful stuff and has a rave from Laurie Halse Anderson on the cover. 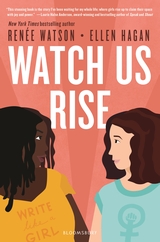 Another book I got was an Australian one with the theme of animal treatment, Sky. The third was a sample of books from that particular publisher - not really interested; short stories would have been fine, but I don’t like samples.

We were invited to go on social media with the hashtag #YAShowcase. There were several people discussing it there, including two authors who couldn’t make it, but were watching the event live streamed on the Insideadog web site; they both followed me on Twitter when I said I was glad to see there were some rom coms in the offerings. To be honest, I have been missing Lili Wilkinson’s over the top rom coms, as have my students, as she has gone all serious rccently and is unlikely ever to go back. So it’s nice to hear there are some new rom com YA authors.

I only saw one person I knew, but he was sitting right behind me, so we chatted before and after the show.

People were taking notes around me and I did start, but finally gave up and took photos of the slides, which reminded me of the details. The only trouble was that someone on stage was taking photos of the audience, which included me taking a photo with my iPad, and ended up on Twitter!

Anyway, I had a good time and came home with more books to read, which is all that matters!


Posted by Sue Bursztynski at 2:57 AM

It's GREAT that you had such a wonderful time at this event, ESPECIALLY since it was dedicated to YA books!!! As you know, I LOVE the Young Adult Fiction genre!! :)

I haven't been to any book events recently.....:( There was one juSt last week, but I was unable to go.... Someone at work told me about it, but it was too late for me to rearrange my schedule. And it was a DARN good one, too - Cassandra Clare was presenting her latest work, "Queen of Air and Darkness". Oh, well.....

This book you've mentioned -- "Watch Us Rise" -- sounds absolutely AWESOME!! I'm adding it to my Goodreads shelves RIGHT AWAY!! That's one of the best parts of these events -- getting ARCs to read!! YAAAAAY!!! The other, of course, is getting to hear authors present their works and interact with the audience!

Thanks, Maria! Sounds like you’ve been to at least one very enjoyable event recently yourself. I have finished Watch Us Rise, and it was great! Unfortunately I can’t review it yet due to the February embargo date. I’m now reading the second book from the goody bag, Sky, and quite enjoying it, but wishing it would get on with the main theme. I think I’ve already guessed the connection between the cute boy at the heroine’s new school and an Instagram follower she wants to meet. Also an ARC, so can’t review it.