Book Blogger Hop: Did You Get Any Books For Christmas?

This week’s theme asks what books you got for Christmas. Last Christmas the answer was Hidden  Figures by Margot Lee Shetterly, about the African American women “computers”of NASA in the 1940s/50s. A wonderful book, but I had it in ebook already. Still, I took it to the beach on Christmas Day. This year I got something even better: a $70 gift voucher for Dymock’s Bookstore. It’s a big  bookshop that feels like a small one, because I know the staff at the “special orders” counter and the children’s section and they know me and greet me by name.

So, a bit before Christmas, I went to spend some of my voucher in hopes that I might find Black Tudors, a book I have wanted for some time but which the shop didn’t have last time I looked. This time it was right there on the history shelves and that was my chosen book for Christmas Eve reading, in honour of Yule Book Flood. I told my mother what I was planning and she shrugged. “What’s so special? You read every day!” True - but I read over meals and on public transport and at bed time. This time I allocated a whole evening to my new book, with music - Maddy Prior and the Carnival Band’s album “Carols And Capers” which has a Christmas theme, ranging from the Boar’s Head Carol to 19th century American songs. Lovely and soothing to hear as I read about Africans in Tudor England, starting with one of Henry VIII’s trumpeters, John Blanke, who was part of a very well paid group of musicians who had to do everything from fanfares for the King to tournament fanfares. Those could last all day, so the musicians were paid about ten times their usual fees(and to think our curr net government whines about double time for weekend retail work here!) I’m currently reading the second chapter, about divers employed to retrieve stuff from sunken ships such as the Mary Rose. Africans were used for this because most English couldn’t swim and Africans could. Not sure which countries they came from, but nice to know some people were teaching their kids to swim!

I’m also reading another book I bought that day. This one. 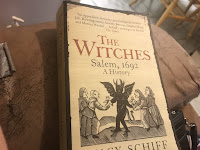 The subject matter is sad, but the book is very entertaining, written in a relaxed, chatty style. I’ve never heard of Stacy Schiff, but will certainly look around for more of her work. She doesn’t just tell you what happened or even, like the average historian, speculate as to whether this must have happened because someone said or did that. She does say that the records are confusing, mainly because the courtroom - actually the village’s meeting house/church - was so crowded and noisy it might have been hard to see or hear what was going on.

What I liked was how she goes right back before all this happened, what was the politics, who was orphaned by Indian raids, what were Puritan customs as opposed to others(one bit tells us about kids captured by the Indians who didn’t want to go home - apparently they let their  children have a bit of time off! How dreadful!). Elderly Rebecca Nurse, who appears in Arthur Miller’s The Crucible, was very rare in not having lost any of her children, and that would have made her suspect.

The author even cheekily quotes from Harry Potter And The Deathly Hallows! Who would have thought that this tragic bit of American history could be told in such a witty and amusing way?

Finally, here is a book I bought on Boxing Day but haven’t begun yet. Hey, Oliver Phommavanh, how could it not be good? And hilarious!

Posted by Sue Bursztynski at 2:01 AM

I have read both Cleopatra and : A Great Improvisation by Schiff and I highly recamend them both. I had heard some bad things about The Witches so I had not read it. I should give it a try.

I have been interested in Witch Hunts. In the past couple of years I have read Witch Hunts in the Western World by Brian Pavlac, The Devil in the Shape of a Woman by Carol F. Karlsen and A Storm of Witchcraft by Emerson W. Baker. The last one was specifically about The Salam Witch Trials. I recamend all these books bit the first two Witch Trial books that I mentioned were a little dry. I found all to be informative.

Thanks for the recommendations, Brian! I read quite a lot of layman’s history and science. People say rude things about Alison Weir, but I find her entertaining, so don’t always accept what others say. Perhaps your library has a copy you can at least check out?

I did get a Barnes and Noble gift card in November, but it was from my bank, lol. I had accumulated 5,00 reward points because of my credit card purchases. :)

I was my own Santa this year. Heck, I've been my own Santa for several years now! My husband and family (Mom and two sisters) think I have "plenty" of books already, so they stopped giving me books years ago..... :(

How very interesting that there were actually Africans living in England centuries ago -- even all the way back to Roman times! I don't think many people know about this, so I'm sure this book will be an illuminating read! I've already added it to my History Wish List on Amazon, and will, of course, add it to my Goodreads shelves! :)

I like the other two books you got, as well, especially "The Witches". And yes, it's INCREDIBLE that the author of this book actually quotes from "Harry Potter and the Deathly Hallows"!! AWESOME!!

Yes, the gift voucher was lovely! Two friends chipped in for it as a joint gift. I texted them both a photo of my purchases. I also get iTunes vouchers from family for my birthday and I use those for ebooks.

I hope you enjoy Black Tudors, but it is only about the Tudor era. If there were Africans there in Roman times, I don’t know about it, though perhaps some of the Roman auxiliaries?

I chuckled at the Harry Potter quote - as I said, a very laid-back chatty style!