Fifty years ago today, three astronauts - Jim Lovell, Bill Anders and Frank Borman -  were orbiting the moon and reading the first few lines of Genesis to their worldwide audience. Here is a link to the NASA account, which also has a link to the message itself.

And here is a photo taken by Bill Anders, Earthrise, which has been all over the Internet and won awards. I got it from the NASA site. 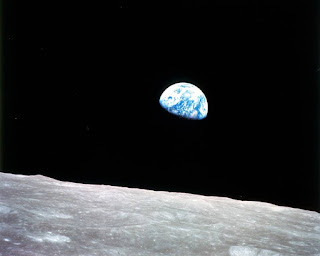 Gorgeous, isn’t it? Bill Anders was taking the photos, among other things, because his original job, Lunar Module pilot, for which he had trained, was not happening. I don’t think the astronauts minded too much, because they were not originally going to the moon, even to orbit it. But they did, and they took film, both black and white and coloured. Most of them were in black and white, but Bill decided that this picture was too special to take in black and white and asked for a roll of coloured film.

The year was 1968 and dreadful things were happening, such as the assassinations of Martin Luther King and Robert Kennedy. The Vietnam War was happening. Not a nice year. But Frank Borman said that the most memorable of the many telegrams they got thanked them for saving 1968 - I guess people desperately needed a good news story among all the bad news.

You might be interested to know that Frank Borman was offered the place on Apollo 11 that went to Neil Armstrong, but turned it down as he had decided to retire. Jim Lovell, of course, was on Apollo 13. Bill Anders was a rookie on that flight, but decided not to take any more voyages.

In case you want to read more about this flight, there is a wonderful book by Jeffrey Kluger, who also  wrote Lost Moon, on which the film Apollo 13 was based. This link will take you to the Booktopia page, where you can buy it in Australia, but you should also be able to find it on the usual book web sites.

I read it as research for an article I was hoping to sell to a children’s market that had been an excellent source of publication for a long time, but they had changed suddenly - without telling me, though I had been writing for them for years - and I discovered that they were now doing themed issues and the email address was mostly automated, unless they wanted to ask you for a hold.

As it happens, they still have two of my articles on hold, as I write this, this one and an article about the Eugowra robbery, a topic in which the previous editor had expressed interest. I’d hoped that the anniversary would be a good chance of selling, but... We will have to wait. The theme for the issue is “Voyages” and that should suit, but with a pile of slush competing, who knows? Fingers crossed!

Posted by Sue Bursztynski at 8:43 PM

What a lovely post for Christmas and to mark the anniversary of such a pivotal moment in history with the flight of Apollo 8! It must be a grand sight to see the earth from the darkness of space as these brave men did so many years ago. Part of me would love that opportunity and the other part cowards away from the idea. Oh, well you won't find me in space but at least I have pictures to enjoy the view. I hope your Christmas was a delight and pray that 2019 brings nothing but good things to you!

Thanks, Cathy! Yes, being out in space must be very special. And you’re right, it was scary in those days when you were pretty much sitting on a massive bomb to get you out there!