The Boy And The Spy by Felice Arena. Penguin Random House Australia 2017 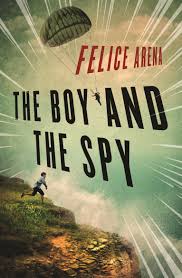 Life has never been easy for Antonio, but since the war began there are German soldiers on every corner, fearsome gangsters and the fascist police everywhere, and no one ever has enough to eat. But when Antonio decides to trust a man who has literally fallen from the sky, he leaps into an adventure that will change his life and maybe even the future of Sicily…

The man who falls from the sky near Antonio’s tiny Sicilian village, late in the war, is an American spy who has been given the job because of his fluent Italian. He is injured and hiding in a sea cave. Antonio, an orphan whose adoptive mother is dying, is able to help him with medical supplies and smuggle him food, but there is more, much more, that has to be done, under the noses of Fascist and Nazi soldiers, with the help of a new friend and her family, who are also against the dictatorship.

I admit I haven’t read many of Felice Arena’s books before, though the Specky Magee football  novels, set in the present day, were very popular in my school library(the one that has been knocked down for the new school). I liked this one very much. It’s exciting and touching as well, and has some strong female characters.

And given that it got on to the short list for the YABBA  Awards this year, a lot of his young fans also enjoyed it. That’s not easy with children’s historical fiction, the area he has now turned to. You have to be very good indeed to get kids into historical fiction. Jackie French is an example of a writer who can do that, Morris Gleitzman another. Now they have been joined by Felice Arena.

I’m about to get stuck into Fearless Frederic, another historical novel, set in Paris early in the 20th century. I’m looking forward to curling up with that one in bed, very soon!

Posted by Sue Bursztynski at 12:54 AM