Rita Levi-Montalcini has finally passed away at the grand old age of 103. In case you haven't heard of her, she was a scientist who won a Nobel Prize at one stage. During the Second World War, she was unable to work in a lab because she was Jewish and living in Mussolini's Italy, so she worked at home, using what she could get - eggs! Chicken embryos told her a lot about nerves. After the war, se went to the US at the invitation of a Viktor Hamburger. She ended up staying 30 years, winning a Nobel Prize with her colleague Stanley Cohen. Apparently, she was the only Nobel Laureate so far to live over a hundred years.

She discovered nerve growth factor, which could still have a big effect on things like Alzheimer's. 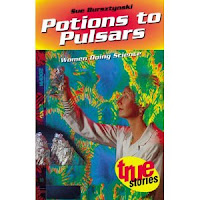 I wrote about her in my second book, Potions To Pulsars: Women Doing Science, which was about women scientists. In those days, most of my research was done at the State Library; the Internet was something I used once a week in one of the early Internet cafes. I had to look up a lot of science so I could understand what it was my heroines had achieved. I remember with this one, I was up late, working on my editing, when I heard a news item about a Sydney woman scientist who had found that we all had unformed brain cells which could be developed and I immediately thought,"Nerve growth factor!" I got a fax number for this scientist - yes, these were the days before I had my first email! -and wrote to ask her and she said yes,she had used NGF and I had another bit for my book.

Where a scientist was still around, I made contact to get them to check out the chapter about themselves - Rosalyn Sussman Yalow( brilliant work with insulin), Jocelyn Bell Burnell(radio astronomy, discovered pulsars) and Rita Levi-Montalcini. I can't even remember how I found all these addresses, but it wasn't online - I have never regretted studying librarianship, especially the reference section! You really learn how to look things up. But I faxed to Rome and gave them a fax number which turned out to be useless, because one evening I got a call from one of the great scientist's staff, who said every time she  tried to fax, someone on the other end picked up the phone and said,"Hello? Hello?" It was my friend Bart's fax/phone and not much use, it seemed. So I gave her my school's fax instead and her boss checked out my MS about herself. My publishers got in touch to ask for a photo and the chapter went into the book.

I suppose I admire her not only because of what she discovered, but because she made the most of what little she had and laid the foundations for her later work. I know about making the most of a little, but thinking of her really puts it into perspective. And she was going strong, right till the end. Sleep well, Rita - you have earned your rest!

Posted by Sue Bursztynski at 1:57 PM