Joanne Anderton Blames It on Yoga: The Bone Chime Song 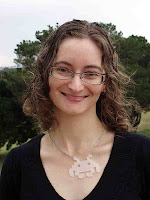 Next guest post is by the wonderful Joanne Anderton, author of two novels and a lot of short fiction. I got one of Jo’s stories in slush once and read it over lunch at work - blind, so I didn't know whose story it was. “Oh my God!” I cried aloud. “This one has the Royal Flying Doctor Service flying in on dragons!” But in the end, it was about a girl (a young doctor) and her lizard. A fabulous story that impressed even the cover artist of the issue of ASIM in which it was published.

The Bone Chime Song is also an OMG tale, but I’ll let the editors tell you their reflections on Joanne and her writing.

Jo’s ‘The Bone Chime Song’stood out on several levels. It’s just a shade removed—almost literally—from a police procedural but, like the intricate handiwork of the craftsman who is the story’s protagonist, it’s shot through with so many other facets that the story’s society feels fully realised in just a few short pages. Plus, of course, there are the characteristic Anderton touches which kinda creep up on you ...

I love Joanne Anderton's style of writing. She has the knack of immersing her readers into her world, and her characters all feel like "real people" .  I loved reading her debut novel, "Debris", and can't wait to read "Suit" the next in the series which should be out in the next few months. It was great working with her on "Light Touch", and she's such a nice person.

Now read what Jo has to say:

I wrote The Bone Chime Song because I suck at meditation. You know those five minutes at the end of yoga class when you're supposed to listen your body, be soothed by the voice of your teacher, clear your head, all of that stuff? Yeah, I'm really no good at that. My brain makes up stories instead.
So one day, lying on my mat, all stretched out and flopsy, I was listening to the wind chimes just outside the window. Maybe my brain was just as flopsy as the rest of me, but I started to think about how wind chimes sing with the voice of whatever they are made of. The smaller metallic ones are so light and shiny, the great big wooden ones deep and echoing. This naturally evolved into -- what if they were made from scrap? From the broken, discarded bits of other things. (I have a scrap theme, a making new things out of old things theme, going on at the moment. I don't know what that's about) What would parts of a rusty pram sound like, could you hear the memory of a baby's cry? Would cutlery sound like dinner, horseshoes like galloping?
And what song would a wind chime sing if it was made from human bones?
That's how this story starts, with the bones' song. And this was how I started writing it, with the image of the bone chime in my head... but I had no idea what happened next. I tried a few things, wrote a few hundred words here and there. I learned that there would be Necromancers in this world, wars fought with magic and muskets, and long dead Gods. But as for an actual plot? Nothing. So I put the story away.
Until Light Touch Paper, Stand Clear happened. The theme of this wonderful little anthology is the 'spark' and what happens after that spark is lit. It's a broad theme, and we've all interpreted it in different ways. This was both liberating and terrifying for me at the beginning, and I spent a while wondering what on earth I would write. Then, you know what happened? A spark happened! Because I realised that was just what my wind chime story needed -- a spark to get it started.
I think there are a few sparks in this story. There's the initial spark that sets off the plot -- a mysterious murder, and the lengths one character will go to solve it. There's the song the bone chime sings, and its consequences. But there's also a third, a quiet, slow burn going on under the surface, of impossible love and constant heartbreak.
So there you have it. The Bone Chime Song -- proof that I can't meditate to save my life, and nothing happens without an initial spark.

BIO:
Joanne Anderton lives in Sydney with her husband and too many pets. By day she is a mild-mannered marketing coordinator for an Australian book distributor. By night, weekends and lunchtimes she writes science fiction, fantasy and horror. Her short fiction has most recently appeared in Light Touch Paper, Stand Clear! and Epilogue. Her debut novel, Debris (Book One the Veiled Worlds Series) was published by Angry Robot Books in 2011. Book two, Suited  has just been released. Debris was a finalist for the 2011 Aurealis award for Best Fantasy Novel, and Joanne won the 2012 Ditmar for Best New Talent. Visit her online at http://joanneanderton.com  and on Twitter @joanneanderton.

Posted by Sue Bursztynski at 5:19 PM